Will be integrated into Lotus electric sports car architecture 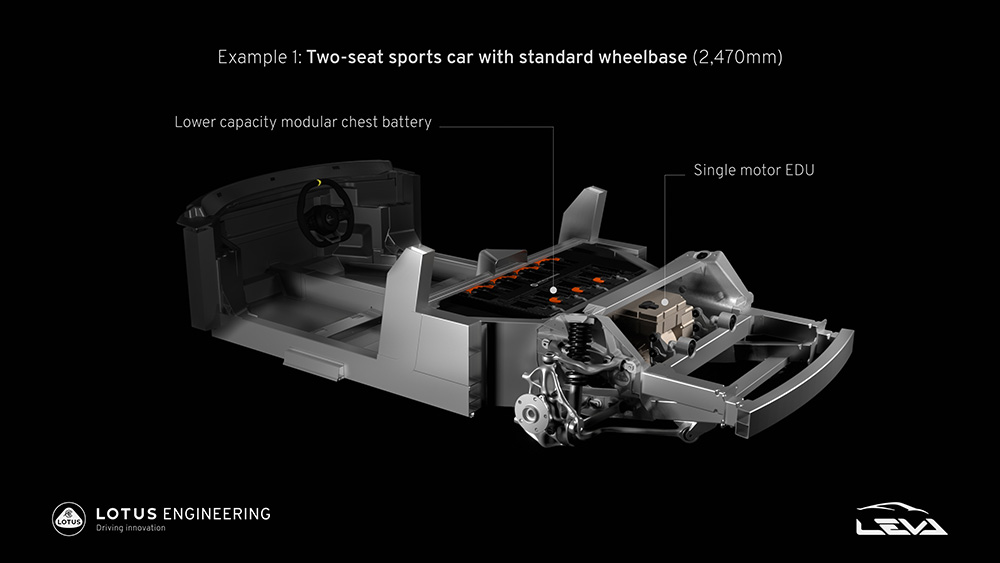 Just weeks after Lotus confirmed it will be launching a new family of EV performance cars, it has given a world premiere to the innovative new lightweight chassis technology that will underpin the electric sports car in the range.

Today Lotus can reveal it’s this structure developed through Project LEVA which will be integrated into the company’s new architecture for electric sports cars. Thanks to the innovation of Lotus and the Project LEVA partners, the rear structure is 37% lighter than it is on the Lotus Emira V6. It means Lotus now has the ‘blueprint’ for the next generation of electric sports cars, for future Lotus products and for the Lotus Engineering consultancy to commercialise.

The Project LEVA lightweight chassis technology is being shown at the Low Carbon Vehicle event staged by Cenex, the UK’s Low Carbon and Fuel Cells Centre of Excellence, at Millbrook Proving Ground, Bedfordshire, UK, on 22/23 September.

This unique degree of flexibility and modularity in wheelbase and propulsion solutions will be the genesis for a wide variety of electric vehicle applications. These could be for the eagerly anticipated Lotus electric sports car – scheduled for launch in 2026 – as well as for third-party clients through Lotus Engineering.

Funding for the project came in part from the Advanced Route to Market Demonstrator programme (ARMD). Awarded by the UK Government’s Department for Business, Energy and Industrial Strategy (BEIS), the programme is delivered on behalf of the Advanced Propulsion Centre (APC) by Cenex.

Richard Moore, Executive Director, Engineering, Lotus Cars, commented: “Project LEVA and the electric sports car architecture are perfect illustrations of the innovation which continues to be at the heart of everything Lotus does. Today’s EVs are heavy in comparison to their ICE equivalents, so the ARMD funding has helped Lotus to innovate earlier in the product cycle and develop a new vehicle architecture that targets lightweight and performance density from conception. Rather than developing a single vehicle, it means Lotus now has the ‘blueprint’ for the next generation of electric sports cars, for future Lotus products and for the Lotus Engineering consultancy to commercialise.”

Project LEVA has been led by engineer Richard Rackham, Head of Vehicle Concepts, Lotus. Richard is best known for his revolutionary work on development of the extruded aluminium Lotus Elise architecture 25 years ago. Richard commented: “Project LEVA is as revolutionary now as the Elise architecture was in 1996. In true Lotus spirit, significant weight savings have been achieved throughout, with a focus on ultimate performance, efficiency and safety being engineered into the structure from the outset – for example, by utilising the vehicle structure as the battery enclosure, having an integrated EDU, eliminating bolt-on subframes and optimising the multi-link suspension components.”

On Project LEVA, Lotus has collaborated with supply chain partner Sarginsons Industries and leading academics from Brunel University London to harness the full ‘light-weighting’ potential of the vehicle architecture.

The next stage of the project is for Lotus to continue development of the all-electric vehicles which will be built on this innovative and market leading new architecture.

Also on the Lotus stand at Cenex is the Lotus Evija, the world’s first pure-electric British hypercar. The car, an engineering prototype, will be ‘naked’ with several body panels removed to allow visitors to see key components and systems.

Munro – the World’s Most Capable All-Electric 4×4