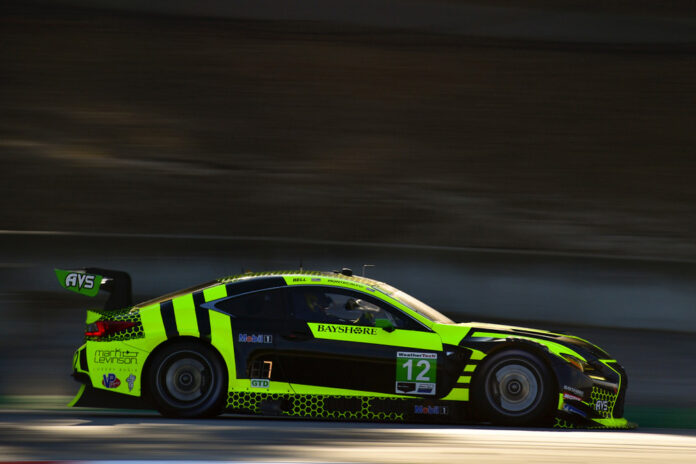 Townsend Bell and Frankie Montecalvo finished third in the Sprint Cup standings following an eighth-place result at Laguna Seca on Sunday. Hawksworth and Telitz also had a hard-fought battle at the 2.238-mile California road course and finished 11th on Sunday.

Heading into the final IMSA race of the season, Lexus ranks second in the overall Manufacturer Championship, two points behind the leader, while the No. 14 RC F GT3 is currently in third place in the team standings. The No. 12 Lexus also ranks in the top-five in the point standings, sitting fifth in points heading into the season-finale at Sebring.

Lexus and AIM VASSER SULLIVAN compete in the season-finale Twelve Hours of Sebring on Saturday, November 14 at Florida’s historic Sebring International Raceway. For all of the racing action, follow Lexus Racing on Facebook, Instagram and Twitter by using #LexusRCF GT3, #LexusPerformance and #LexusRacing.

JACK HAWKSWORTH, No. 14 Lexus RC F GT3
How was your race?
“We just really struggled for speed all weekend. We tried some stuff for the race, we didn’t give up, but it just didn’t work. We were just slow today so unfortunately we didn’t have the speed to compete, but we got to the end of the race.”

AARON TELITZ, No. 14 Lexus RC F GT3
How was your race?
“It was pretty rough out there. Obviously, the puncture of our right rear tire in qualifying didn’t help us and we started toward the back of the field. Then, with having to conserve tires so much it was tough to make moves earlier in the race to move us up track position which we probably would’ve lost anyways when our tires fell out. Just a tough day with tire degradation and not having track position at the beginning of the race. But, we’re still in the title fight and there’s another race left so we’ll head back into battle one more time in 2020.”

TOWNSEND BELL, No. 12 Lexus RC F GT3
How was your race?
“We didn’t expect much today, but I’m pleased that we drove well for what we had and made the most of what we had. As a team, this is probably one of our strongest weekends of the year. I know that sounds weird being off the pace and coming home eighth, but in terms of setup. Frankie (Montecalvo) did an awesome job in qualifying, the decision making in terms of setup and how to manage the tires and how to approach the race, so as a team we should be happy that we worked well together. I’m proud of my guys. Think about where we were at the last race two weeks ago with our car damaged after the late race incident. They had to build a totally new Lexus for me, and we came here, and everything ran great, so I’m really proud of the guys.”

FRANKIE MONTECALVO, No. 12 Lexus RC F GT3
How would you assess today’s race?
“We knew this isn’t a strong track for us, but the AIM VASSER SULLIVAN team did a phenomenal job doing everything they could to get our pace up. I think if you look at last year where we kind of finished up our qualifying was much stronger this year and our finish was a top-10. All of the guys did a great job with pit stops and things like that. Townsend (Bell) was fighting there at the end with no tires left. We kept it clean and we brought home some good points for the manufacturer’s championship.”

Bentley Continental GT3 Pikes Peak Racer to be the Most Dyna...

Lexus Reveals Gamers’ IS – First Vehicle Designed by and for the Twitch Co...