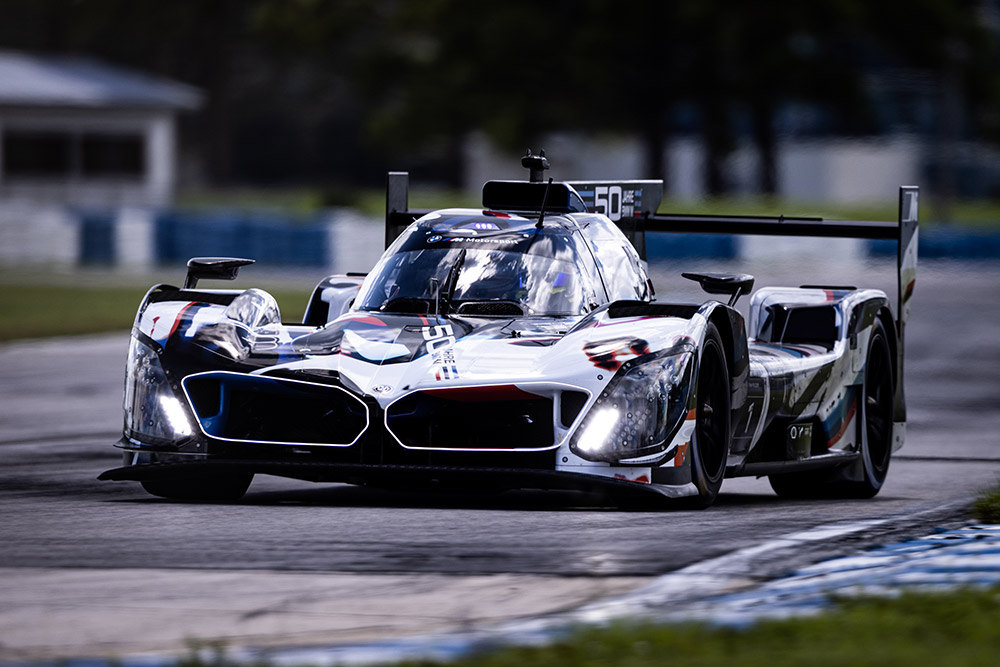 The BMW M Hybrid V8 has arrived in North America and was presented to the public in its racing colors for the first time at a launch event at the Petersen Museum in Los Angeles (USA). The first prototype developed by BMW M Motorsport in 25 years, will sport an avant-garde livery which leverages the iconic BMW M colors when it competes in the GTP class of the IMSA WeatherTech SportsCar Championship in 2023. The four core drivers who will take their place at the wheel of the two BMW M Team RLL cars were also announced at the Petersen Museum. They are BMW M works drivers Connor De Phillippi (USA), Philipp Eng (AUT), Augusto Farfus (BRA) and Nick Yelloly (GBR). When the car makes its race debut at the 61st running of the Rolex 24 At Daytona (USA) on January 28-29, they will receive big-name support from the IndyCar series driver Colton Herta (USA).

Franciscus van Meel said: “We are proud that, parallel to the 50th birthday of BMW M, we are returning to the big motorsport stage with the BMW M Hybrid V8. We are delighted that this adventure begins in North America, the most important international market for BMW M GmbH. After all, the BMW M Hybrid V8 is more than just a race car, it is paving the way for an electric future for BMW M, by emphatically demonstrating how dynamic and emotional electrified M Power can be.”

Andreas Roos: “Being back in the top class of motorsport and battling for overall victories at such legendary races as Daytona, Sebring and Road Atlanta in 2023 is both a major challenge and huge motivation for everyone at BMW M Motorsport. We have worked very hard in recent months to get the BMW M Hybrid V8 ready for racing in a short time. Thank you to all our partners at Dallara, BMW M Team RLL, our development team RMG, and BMW Group Designworks for the fantastic support with assembling, developing and testing the car. The BMW M Hybrid V8 is a beautiful race car. It is now our job to make it fast. We are working towards achieving this goal day by day and are confident that we will be ready in January when we really get down to business for the first time at Daytona.”

BMW M Team RLL Principal Bobby Rahal said: “There is no doubt that we understand and appreciate the level of commitment and dedication it will take on the part of RLL to be successful in this new venture. BMW M Motorsport is providing us with a great car, great engine and great driver lineup, of which we are very pleased. We understand the scope of the challenge in front of us and look forward to meeting it head on. As has been the case before, the level of cooperation and teamwork has been tremendous. Being in on the ground floor certainly gives our personnel good insight into the car from the beginning. I’ve learned long ago that you temper your expectations. Yes, you have hopes and you know you will be ultimately successful, but, as with any new car program, there are unforeseen circumstances that can work in your favor or work against you. For RLL, it’s a matter of being prepared for either.”

The BMW M Hybrid V8 has begun its extensive testing schedule in the U.S.A. earlier this week with a test at Sebring International Raceway. The test car will also be on public display at the upcoming Petit Le Mans IMSA season finale.

Two topics were in the spotlight at the Petersen Museum reveal: The world premiere of the design and racing livery of the BMW M Hybrid V8 and the presentation of the four core drivers and one of the additional drivers for the endurance races.

The four core drivers for the 2023 IMSA Season are Connor De Phillippi, Philipp Eng, Augusto Farfus and Nick Yelloly. They will drive the two BMW M Hybrid V8s, with start numbers 24 and 25, at all of the season’s races. De Phillippi and Yelloly will form one pairing, with Eng and Farfus teaming up in the other. They will receive support at the four IMSA endurance races at Daytona, Sebring, Watkins Glen and Road Atlanta (all USA). One man who will be involved in the 24 Hours of Daytona is IndyCar driver Colton Herta. He is one of the stars of the American racing scene and celebrated victory at Daytona together with BMW M Team RLL in 2019 – with the BMW M8 GTE in the GTLM class. The remaining endurance drivers will be announced at a later date.

De Phillippi: “Since the GTP project was announced, it has been a dream of mine to be part of the program. I know we are all eager to deliver championship results for BMW at the top level of IMSA competition.”

Eng: “It is an honour for me to have been given this unique opportunity. I am really looking forward to the challenge and am grateful to BMW M Motorsport for the trust they have put in me. I will never forget my first laps in the BMW M Hybrid V8. It is a thoroughbred race car with a huge amount of performance and power. It reminds me of the Class 1 cars in the DTM. It will be great fun to drive it at the IMSA racetracks.”

Yelloly: “After my first outings at Daytona and Sebring, it is fantastic to now contest the full season in North America – and in this awesome car. For me, it is a return to my roots with high-downforce race cars. I am really looking forward to it.”

Farfus: “To represent BMW M Motorsport again at the top level, and to be involved in the start of this new era of motorsport, is a unique opportunity and a great honour for me. This exciting project is one of the highlights of my career. The opposition is very strong and we will learn a lot in our first year. However, I think we have everything in place to achieve good results from the start. We are definitely working hard to make that possible.”