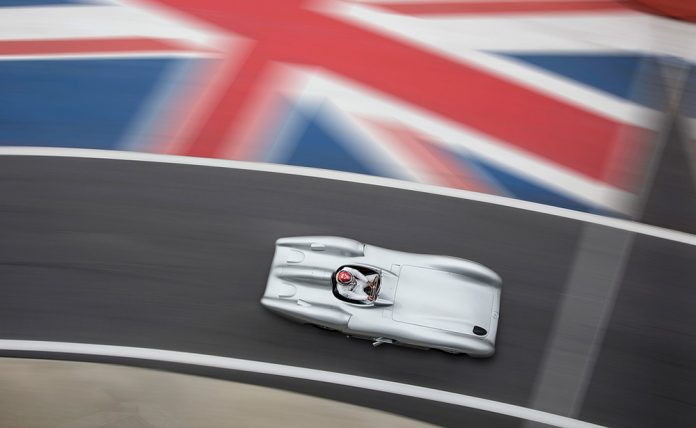 Two Silver Arrows from the Mercedes-Benz Classic collection will be showcased at the Goodwood Revival in honour of British racing driver Sir Stirling Moss, who passed away in April 2020. The 300 SLR (W 196 S) is the Brit’s most famous racing car. Boasting starting number “722”, the team consisting of Stirling Moss and Denis Jenkinson won the Mille Miglia in May 1955 in this vehicle, setting a record for eternity with an astonishing average speed of 157.65 km/h over the 1,600-kilometre race. At the wheel of the Mercedes-Benz W 196 R, Moss finished as the runner-up in the 1955 Formula One World Championship, only beaten by his teammate Juan Manuel Fangio.

The Goodwood Revival uses the traditional circuit for presentation runs and races with historic racing cars. Numerous spectacular sports car and Formula One as well as motorcycling races were held on the 3.8-kilometre (2.37-mile) Goodwood Circuit between 1948 and 1966. Goodwood’s global reputation within motorsport has been built on plenty of tradition and is based on these events. Amongst other things, the 2021 Goodwood Revival is dedicated to Sir Stirling Moss: for this reason, it may potentially bring together the largest number of racing cars driven by the famous motorist. The Stirling Moss Memorial Trophy will also become one of the event’s permanent features as of this year.

“Mercedes-Benz Classic has already showcased the ‘722’ at several events in the UK over the past months in honour of the great person and racing driver that Sir Stirling Moss was,” Christian Boucke explains as the Head of Mercedes-Benz Classic. “The Goodwood Revival constitutes both the pinnacle as well as the final stop of this special tour. In addition to this racing car, we will be showcasing the 1955 Formula One racing car at the event.” The two Silver Arrows with their distinctive sound are each driven by an eight-cylinder in-line engine. Key data of the Grand Prix racing car: 2.5 litres of displacement and 213 kW (290 hp). The racing sports car boasts three litres of displacement and 228 kW (310 hp).

One of the most famous racing drivers of all time

Stirling Moss is amongst motorsport’s greatest racing drivers even though he never claimed a world title. However, as a four-time runner-up in the 1955, 1956, 1957 and 1958 Formula One seasons and finishing in third place three times in the 1959, 1960 and 1961 seasons underline his consistency and class. In 1955, Moss started as a Mercedes-Benz works driver in Formula One with the W 196 R as well as in the Sports Car World Championship at the wheel of the 300 SLR (W 196 S). Moss’s endurance race victories at the Mille Miglia, RAC Tourist Trophy in Northern Ireland and at the Targa Florio in Sicily made a vital contribution to Mercedes-Benz claiming this trophy ahead of Ferrari. In Formula One, the highly talented Brit claimed the victory in Aintree at the wheel of the Silver Arrow on 16 July 1955 – his first of a total of 16 Grand Prix victories. Moss continued his successful racing career following Mercedes-Benz’s withdrawal from motorsport at the end of the 1955 season. He retired from racing at the age of 32 after an accident in Goodwood on 30 April 1962. As a Mercedes-Benz Brand Ambassador, he continued at the wheel of “his very own” Silver Arrows, demonstrating outstanding driving skills even at an advanced age. Moss passed away in London on 12 April 2020 at the age of 90.

Races at the stately Goodwood Park go back to an initiative launched by the grandfather of the current Duke of Richmond. “My fondest childhood memories are of being with my grandfather at the Goodwood Race Circuit,” he says looking back. From 1992 onwards – back then still as the Earl of March and Kinrara – when he took over the country estate, he immediately prepared a comeback of racing activities. The Duke already organised the first Goodwood Festival of Speed in 1993, which he himself dubbed a big garden party with now around 180,000 visitors over a single weekend. The circuit is a 1.86-kilometre (1.16-mile) hill-climbing course around the Goodwood House estate. For a long time now, more or less all major racing teams and automotive manufacturers have been accepting the Duke of Richmond’s invitation to the event. Mercedes-Benz regularly attends with historic and contemporary Silver Arrows including famous drivers, such as Lewis Hamilton and Jochen Mass. The Goodwood Revival has become an established event in addition to the Festival of Speed. 1998 marked the first time after 1966 that racing resumed at the Goodwood Circuit. It’s a festival with a special flair: almost all spectators, teams and other attendees dress in styles from 1948 to 1966. “We asked that attendees wear period clothing and the idea has been received very well,” the Duke of Richmond explains. “As a result, every spectator feels like they are part of the event.”