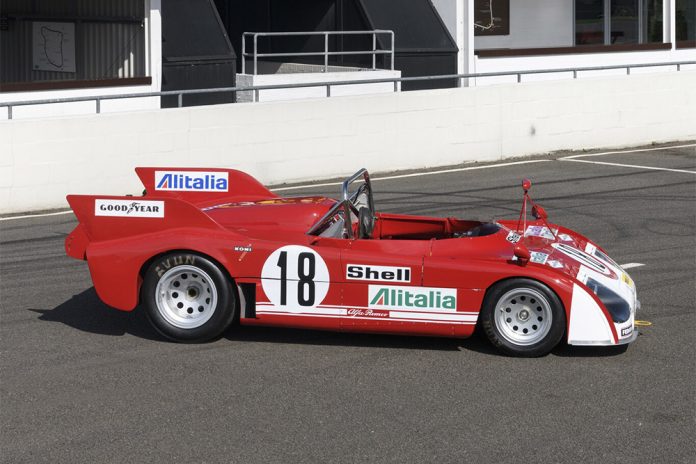 The last Alfa Romeo to campaign the world’s most famous road race, the Le Mans 24 Hours, will pit at the Bonhams saleroom at Goodwood next month, leading a field of historic racing cars and ‘Gentlemen’s Expresses’ at the Festival of Speed Sale on Friday 9 July.

The Alfa duo in car number 18 overcame various incidents over the 307 laps, including a clutch issue and a spin which required the fitting of a new nose cone. Although Alfa Romeo retired from Le Mans, this car campaigned selected events with subsequent private owners, who included Steven O’Rourke, manager of British rock band Pink Floyd, himself a Le Mans racer, and three important Japanese collections: Hayashi Collection, Yamaguchi and finally Takeshi Fujita.

Continually maintained and restored by Tipo 33/3 specialists, this Tipo is eligible for the world’s greatest historic races and concours events, including the Le Mans Classic race which it last contested in 2018.

This example’s bright red livery and 150bhp performance is matched by its exotic provenance. It was the first Maserati to be imported into Argentina by its first owner, rancher and weekend racing driver Juan Augusto (John) Malcolm, an Argentinian of Scottish descent, whose career overlapped with the great Juan Manuel Fangio.

Malcolm ordered ‘number 35’, while racing in Northern Italy, and the car was originally finished in blue and white – Scotland’s sporting colours – rather than the blue and yellow Argentine racing livery. Campaigned by Malcolm for the next decade, it was later converted for more comfortable road use and was kept by the family until the late 1980s.

The Festival of Speed Sale also presents an array of production high-performance sports cars and grand tourers, from the finest sporting marques such as Aston Martin, AC, Bentley and, of course, Ferrari, including the ex-Peter Sellers, The Earl of Snowdon/HRH Princess Margaret, Viscount Linley 1964 Aston Martin DB5 convertible, estimate £1,300,000 – 1,700,000.

1990 Ferrari F40 Berlinetta, estimate £800,000 – 1,200,000. Ferrari’s 40thbirthday gift to itself was the last motor car to be personally approved by Enzo Ferrari and the first production passenger car with a top speed of more than 200mph. The Pininfarina penned mid-engined sportscar was also one of the last ‘analogue’ supercars, devoid of electronic aids such as paddle-shift automatic transmission. This example was first owned by gentleman racer Sir Paul Vestey, who travelled to Italy to collect it.

1966 Aston Martin DB5 Sports Saloon, estimate £500,000 – 600,000. The ultimate Aston Martin and ‘Gentleman’s Express’, as driven by the cinematic James Bond. This example left the factory after the last car had been produced, one of fewer than 900 coupés made. Restored in the 1980s, this Autumn Gold DB5 has merely covered 6,700 miles since and has been in the ownership of the vendor’s family since 1995.

1958 Ferrari 250 GT Berlinetta, coachwork by Carrozzeria Ellena, estimate £700,000 – 900,000. The 250 GT represented a new benchmark for Ferrari as the first refined high-performance tourer offering a quieter, more luxurious interior with a softer ride and light steering. Only 50 examples were built by Carrozzeria Ellena, driven by the likes of Golden Boy Mike Hawthorn, Formula 1 World Champion for Ferrari in 1958. This Ferrari Classiche-certified example, formerly part of the Tunick Collection in the USA, was imported to the UK and treated to a three-year ‘body off’ restoration in the late Noughties.

The Bonhams Festival of Speed Sale will be a traditional live auction on Friday 9 July, with bids accepted from clients in the room (respecting social distancing and all local COVID-related guidelines)and will be livestreamed via bonhams.com and goodwood.com.

The sale will also be available on the Bonhams App, which provides registered bidders the opportunity to bid in real time online via Bonhams.com while watching the auctioneer and videos of cars on offer. Absentee and telephone bids are also encouraged.