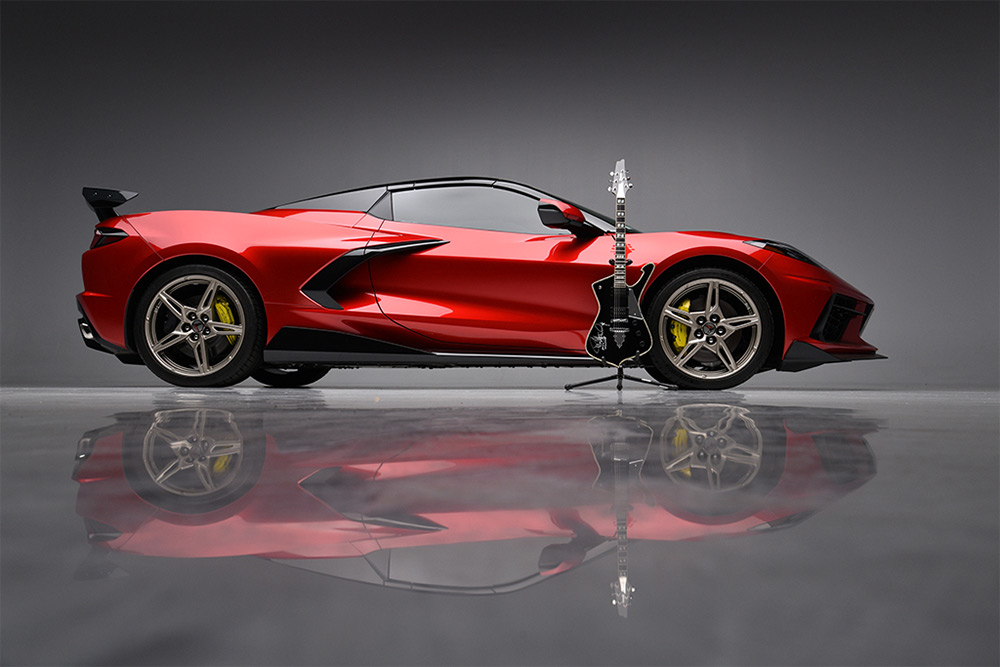 “Offering vehicles with celebrity provenance is something Barrett-Jackson is well known for, and especially during our annual Las Vegas Auction,” said Craig Jackson, chairman and CEO of Barrett-Jackson. “Last year we auctioned several cars owned by major celebrities such as Wayne Newton and the Siegfried & Roy estate, as well as vehicles previously owned by Frank Sinatra and world-renowned music producer Deadmau5. We’re thrilled to return to the entertainment capital of the world with an iconic C8 Corvette owned by one of the most famous names in rock and roll history.”

Offered with No Reserve, this VIN 001 factory customized 2022 Chevrolet Corvette convertible is powered by a 6.2-liter V8 paired to an 8-speed automatic transmission. Finished in a custom Metallic Red Tint Coat with Saddle interior and pewter wheels, this one of one Corvette features less than 800 actual miles. Also offered with the sale of the car is an autographed Ibanez PS120 Paul Stanley Signature guitar.

“The guitar is another part of my life, another aspect of who I am,” said Stanley. “So, I thought that whoever acquired the car should have another piece of who I am. I want somebody to take this car and do whatever makes them happy with it, to enjoy it. That’s really the keyword for any collector of anything – joy. And for me, my life has always been about the joy I can bring to other people.”

Barrett-Jackson returns to Las Vegas following multiple record-breaking auctions in 2022. January’s flagship Scottsdale Auction was Barrett-Jackson’s most successful auction in its 50-year history, surpassing $203 million in sales. Riding this wave of excitement and pent-up demand in the collector car industry, April’s auction in Palm Beach was the company’s most successful Palm Beach event in its history, surpassing $60 million in sales.

“It seems like just yesterday we were hosting the first ever public event in the new West Hall of the Las Vegas Convention Center last year,” said Steve Davis, president of Barrett-Jackson. “It was an honor to do so, and it turned out to be our most successful Las Vegas auction in Barrett-Jackson history. We followed that with a pair of historic events already in 2022 and now looking ahead, I cannot wait to see this incredible docket take shape for our return to Vegas in June.”