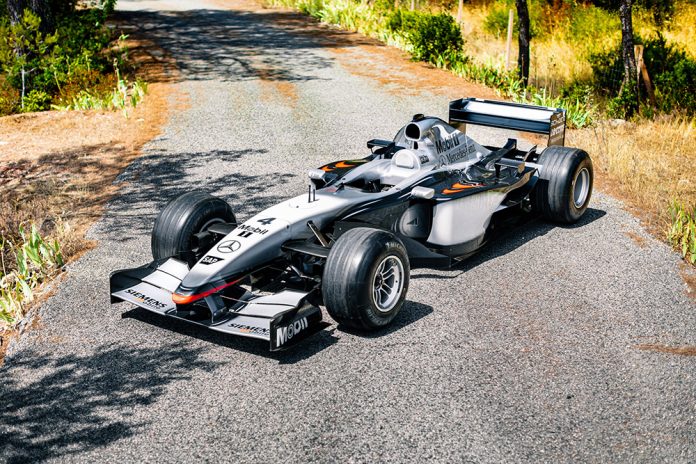 The McLaren MP4-17 was introduced for the 2002 Formula 1 season, featuring a chassis designed by the experienced team of Adrian Newey, Mike Coughlan, Neil Oatley, and Peter Prodromou. The race team turned to Mario Illien of Ilmore Engineering to create a bespoke and honed version of the newly launched 3.0-litre Mercedes-Benz FO110M V-10 engine. This engine was first run on the dyno on 21 November 2001, and it produced an eye-watering 845 horsepower at 18,500 rpm.

The aerodynamics of the car were developed at McLaren’s new, state-of-the-art wind tunnel facility that had recently been completed in Woking, England. Newey altered the front wing on the MP4-17, making it thinner on the downside to draw air under the monocoque. The esteemed David Coulthard set time records in test runs at Barcelona, giving the team hope of victory for the 2002 season. The MP4-17 was the sixth McLaren to appear in the distinctive West McLaren Mercedes livery, which was introduced at the 1997 Australian Grand Prix.

Mated to the Mercedes-Benz engine was a McLaren-designed seven-speed longitudinal automatic sequential gearbox, and the MP4-17’s electronics were produced by TAG Electronic Systems. The front and rear suspension was fitted with double wishbones and an inboard torsion bar and damper system, which was pushrod- and bell crank-activated. The dampers were manufactured jointly by McLaren and Penske, while the car wore Enkei wheels clad in Michelin tyres. Stopping power was provided by Hitco brake discs and AP Racing brake callipers.

For the 2002 Formula 1 World Championship, McLaren’s selection of MP4-17 cars made 17 appearances overall, securing 10 podium finishes, including one 1st place finish at the Monaco Grand Prix. McLaren placed 3rd in the Constructors’ Championship that year behind Ferrari and Williams-BMW. For the 2003 season, the chassis was lightly adapted, culminating in the MP4-17D. Enhanced as a result of learnings from the previous season, the cars earned 13 podium finishes and two victories. McLaren again placed 3rd in the Constructors’ Championship in 2003, narrowly missing out on 2nd place to Williams by a mere two points.

This MP4-17, chassis number MP4-17A-06, raced seven times in the 2002 season (having been used as a spare car for the first three races of the season). Its debut race was the Grand Prix of Europe from 21 to 23 June 2002 at the Nürburgring in Germany. Kimi Räikkönen drove chassis number MP4-17A-06 on its first outing, qualifying 6th and finishing in 3rd place behind Michael Schumacher and Rubens Barrichello. The car would race at the British Grand Prix but failed to finish due to engine trouble.

The third outing for chassis number MP4-17A-06 would be the car’s most successful—not just for this car, but for the McLaren team that season. Driven again by Räikkönen, the Finnish driver would secure 2nd place and David Coulthard in chassis MP4-17-08 would take 3rd on 21 July 2002 at the Grand Prix de France on Circuit de Nevers Magny-Cours.

Chassis number MP4-17A-06 failed to finish at the German Grand Prix due to a puncture Räikkönen suffered on lap 59 while in 3rd place, causing him to spin off and leaving the car with underbody damage. Returning for the Malaysian Grand Prix, Räikkönen missed out on a podium finish, passing the chequered flag in 4th place. MP4-17A-06 did not race at the Belgian Grand Prix, but Coulthard would drive it to 3rd at the subsequent United States Grand Prix. It ended the season with a DNF at the Japanese Grand Prix at Suzuka.

For 2003, the West McLaren team drivers were Räikkönen and Coulthard. Chassis number MP4-17A-06 was upgraded to MP4-17D specification. It ultimately raced five times and was used as a test car on five occasions, with these refinements helping secure improved results. At the debut race that year, the car was driven to 1st place by Coulthard at the Australian Grand Prix on the Albert Park Circuit in Melbourne—an immediate reflection of the improvements McLaren had made to the car, and a foreshadowing of the results for the remainder of the season.

Chassis number MP4-17A-06 next served as a test car at both the Malaysian and Brazilian Grands Prix. Räikkönen subsequently drove MP4-17A-06 at the San Marino Grand Prix, finishing in 2nd place on the Imola circuit. For the Spanish Grand Prix at the Catalunya Circuit, Räikkönen failed to finish after colliding with Antonio Pizzonia’s Jaguar R4. With Coulthard driving, chassis number MP4-17A-06 would take 7th place at Monte Carlo. It was then used as the test car for the European, French, and German Grands Prix. For the car’s final competitive outing, Räikkönen was again behind the wheel, ending the 2003 season on a high note as he finished 2nd at Suzuka in Japan.

Overall, across the 2002 and 2003 Formula 1 Seasons, chassis number MP4-17A-06 raced 12 times and was used as a test car on eight occasions, with a 1st-place finish at the 2003 Australian Grand Prix, with a further three 2nd- and two 3rd-place finishes to its name. Presently configured in its 2002 MP4-17A configuration and wearing its original West livery, this Formula 1 car has an excellent race history at the hands of two storied drivers and highlights the competitive nature of McLaren’s engineering prowess.