The ninth of 10 examples built; ordered through, and personally delivered by, Carroll Shelby. 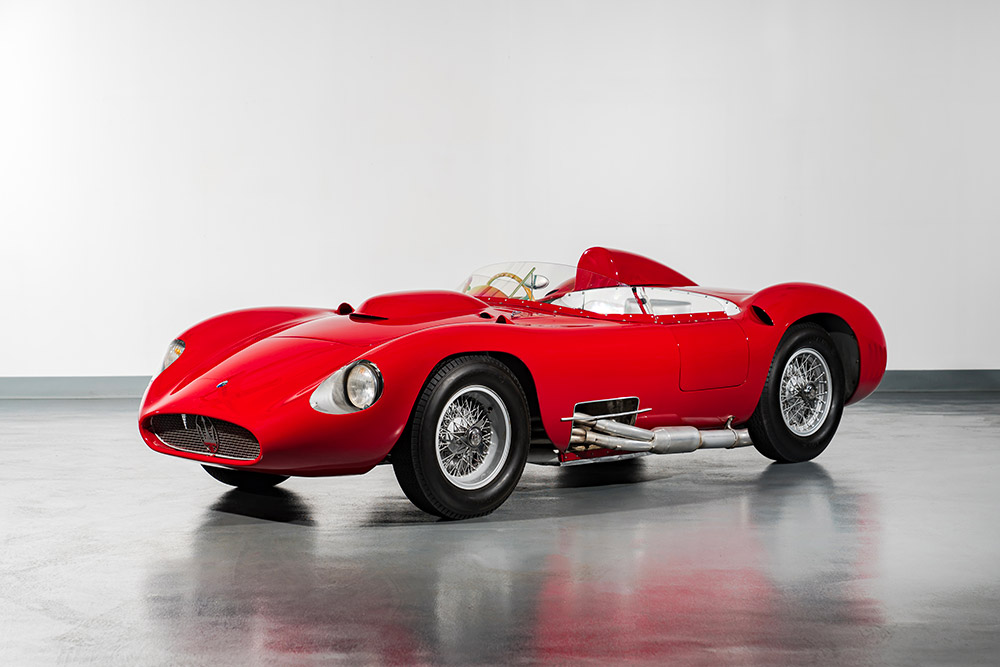 In the dozen years that followed the Second World War, perhaps no boutique manufacturer consistently built faster or more beautiful sports-racing machines than Maserati. The reconfigured Modena manufacturer, under the helm of new owner Adolfo Orsi, was a wellspring of sensational hand-built competition sports cars that dwarfed the company’s meager advances in production automobiles. From the A6GCS spiders and A6G/54 coupes through the mighty 200S and 300S racecars, Maserati consistently built powerful and aesthetically arresting models that convincingly vied for the Italian and World Sportscar Championships, all while the company bravely teetered on the brink of insolvency. This was one of those glorious storybook chapters that ignored financial necessity in the pursuit of a higher dream: the development of some of history’s most enchanting sports-racing designs.

In 1956, nearly a decade into this wondrous evolution, the American privateer team owner and preferred Maserati client Tony Parravano commissioned the factory to build him a pair of 4.2-liter V-8 engines that he intended to use at the Indianapolis 500, as well as a third 4.5-liter V-8 to be used for sports car racing. Welcoming the cash influx of such a significant order, Modena’s engineers also jumped at the chance to dust off a nascent V-8 design that had been shelved with the horsepower de-escalation that followed the disastrous accident at Le Mans in 1955.

With engineer Guido Taddeucci supervising development, the V-8 was completed during May 1956 and dropped into a 350S example, chassis number 3501, which was lengthened by 40 millimeters to accommodate the longer engine block. This prototype was tested during the practice session for the Swedish Grand Prix in July, but the engine was clearly too powerful for the rest of the car, stressing the chassis and getting the better of the standard 350S brakes. A purpose-built chassis and transaxle were then devised by Valerio Colloti, and the new car was clothed in lightweight spider coachwork by Medardo Fantuzzi, with a gaping front grille and curved haunches contributing to a striking design. The potential was undeniable during testing, as journalist Denis Jenkinson timed Jean Behra reaching a blazing speed of 181 mph. The breathtaking Maserati 450S had been born.

In late October 1956 chassis number 4502, the first 450S example completed for customer delivery, was shipped to Parravano. Maserati then prioritized building two cars for factory-based racing, chassis numbers 4501 and 4503, aiming to compete in the World Sportscar Championship. At the season-opening Buenos Aires 1000 KM in January 1957, Stirling Moss and Juan Manuel Fangio ran away from the competition as the car barely broke a sweat, and victory seemed assured until a broken clutch linkage caused the gearbox to fail, prompting an early retirement.

Two months later, with the issues ironed out, Jean Behra and Fangio romped to an overwhelming win at the 12 Hours of Sebring. American team bosses Jim Kimberly and John Edgar immediately wanted to get in on the act, quickly placing orders for cars of their own. These cars went on to perform quite well in competition, particularly Edgar’s chassis number 4506, which was driven by Carroll Shelby to numerous wins. The success of these cars prompted further orders, and by the beginning of 1958 the factory was building what would be the last two of just 10 cars completed.

By this point Maserati faced such overwhelming financial difficulties that it had no choice but to cancel its numerous racing endeavors and focus solely on the development of a marketable production road car. Representing the zenith of the A6G’s development in sports car racing during the 1950s, the 450S has evolved into one of Maserati’s most celebrated models, encompassing rarity, raw power, exquisite coachwork, and a bona fide competition pedigree. These beautiful spiders favorably compare with the finest racing models concurrently produced by Maranello or Stuttgart, making them giants at the peak of sports car racing’s pantheon, the crème-de-la-crème of the most exclusive and accomplished models.

Retaining its numbers-matching engine, this 450S benefits from a well-maintained 1990s restoration and in-depth history/research reports by two of the Maserati niche’s most respected historians, combining for one of the best-presented of the 10 examples. The penultimate example produced, chassis number 4509 was ordered new through Carroll Shelby’s Texas-based sports car business by Jesse “Ebb” Rose, a privateer racing driver and owner of the J.H. Rose Truck Line company of Houston, Texas. Rose already owned two Maserati 300S examples, and he employed a racing mechanic named Lloyd Ruby who would go on to be very successful in Indy car racing. Completed in late January 1958, the 450S was delivered in mid-April by Shelby himself to the Galveston airport, where it would participate in an SCCA Regional race called the Gran Carrera Lafitte. Following a warm-up/demonstration lap by Shelby, Ebb Rose took the wheel and finished 1st in both the seven-lap sprint and the 20-lap main event.

The victory made quite an impression on the local racing community, culminating in a sponsorship agreement with Micro-Lube, a manufacturer of oil and fuel additives based in Dallas. The rosso coachwork was then repainted in the company colors of blue and white, and decorative script was added to each side reading “Micro-Lube Special.” In this cosmetic livery Rose drove 4509 to victory at the Eagle Mountain SCCA Regional event at Fort Worth, again winning both races while convincingly besting future Chaparral principal Jim Hall, who was driving a Lister Chevrolet. The owner followed this with another victory in November at the Hammond, Louisiana, regional races, this time beating Ray Jones’ Ferrari Testa Rossa.

During late 1958 Ebb Rose had been fielding his other Maseratis in the inaugural season of the USAC Road Racing Championship for sports cars, and when the series was upgraded to a full calendar for 1959, he committed all his cars, including 4509. The 450S went on to face off against some of the world’s most accomplished drivers, including European stalwarts like Roy Salvadori, Ron Flockhart, and Maurice Trintignant, and American racers including Dan Gurney, Chuck Daigh, Bill Krause, and Shelby.

After two early retirements at Pomona and Daytona, 4509 began to find its stride with mechanic Lloyd Ruby at the wheel, particularly at the Meadowdale circuit north of Chicago, where it finished 2nd in May, 3rd in July, 1st in sprints in September, and 2nd again a day later. At the Los Angeles Times Grand Prix at Riverside, California in October 1959 the Maserati again finished 2nd, propelling Ruby to an impressive 2nd-place finish in the final USAC driver’s standings for 1959.

By early 1960 the Maserati was struggling to compete against newer designs, and the car made its last racing start at Riverside in April 1960, resulting in an early retirement. Ebb Rose and Lloyd Ruby now prioritized Indy racing above all else, with the latter making 18 consecutive starts at the Indy 500, and also becoming a key contributor to the development of the Ford GT40.

In September 1960 Rose sold the Micro-Lube Special to Frank Harrison of Chattanooga, Tennessee, and it joined two other 450S examples in his collection. Four years later the car was sold by his mechanic, California resident Jerry Eisart, to an unidentified buyer. By May 1965 the Maserati factory tracked ownership of the car to Richard Fellowes, a principal at a marque dealership in Slough, England, and the car was temporarily fitted with the engine from chassis number 4508.

Subsequently passing to British parliament member John Fellowes, the 450S underwent a full restoration by vintage racing specialist Trevor Stokes that was documented in the October 1974 issue of Motor Sport magazine. During this process the Maserati’s numbers-matching engine was sourced and re-installed, and five years later the car was acquired by Bob Sutherland of Colorado.

In 1986 the 450S was sold to Japanese collector Yoshiyuki Hayashi, by which time it had been repainted in the proper original rosso, as revealed by coverage in a 1986 issue of the French magazine Automobiles Classiques and a 1988 issue of the Japanese magazine Car Graphic. After passing through several U.K.-based dealers in mid-1995, the Maserati was purchased by German collector Peter Groh, and a year later he sold the car to Myron Schuster of Bedford, New York. Schuster soon commissioned a comprehensive restoration.

In 2002 the Maserati was acquired by fellow Bedford resident Scott Rosen, and he significantly enriched the car’s documentation by retaining marque expert and historian and author Willem Oosthoek to compile a full research report. The documentation was further bolstered a few years later after Oscar Davis acquired the car when he retained the well-known Maserati historian Adolfo Orsi (grandson of the marque’s onetime owner) to conduct a full inspection and historical analysis, including the sourcing of factory build sheet copies.

After conducting a meticulous inspection in 2007, Mr. Orsi authored a report in which he notes that the 450S retained much of its original mechanical equipment, including the engine heads and crankcase, the transaxle, the steering box, radiator, starter motor, the exhaust manifold, the Houdaille shock absorbers, the front and rear suspension components, and the rear De Dion tube. He notes the chassis frame’s tubing is of correct dimensions and appears to be authentic, while the engine bears the correct corresponding internal number stamping of number 6, as per the factory build sheets. This report concludes that the car retains an overwhelming degree of authenticity, with a large majority of the components being original or correct, as well as a continuous and well-documented history.

Presented in 2006 at the Palm Beach Concours d’Elegance and the Amelia Island Concours d’Elegance, this beautiful Maserati is a rare example of the marque’s most highly developed 1950s sports-racer that would be welcomed at major events worldwide. It is ideal for display at finer concours d’elegance, or it may also be enjoyed for its raw power at touring events or on private drives. Documented and authenticated by some of the Maserati niche’s most respected historians (including Adolfo Orsi himself), this striking 450S has been mechanically maintained as needed over the last 15 years by Leydon Restorations. It would crown most any collection of vintage Italian sports cars, offering an unparalleled opportunity to acquire a model that only rarely becomes available for public sale.