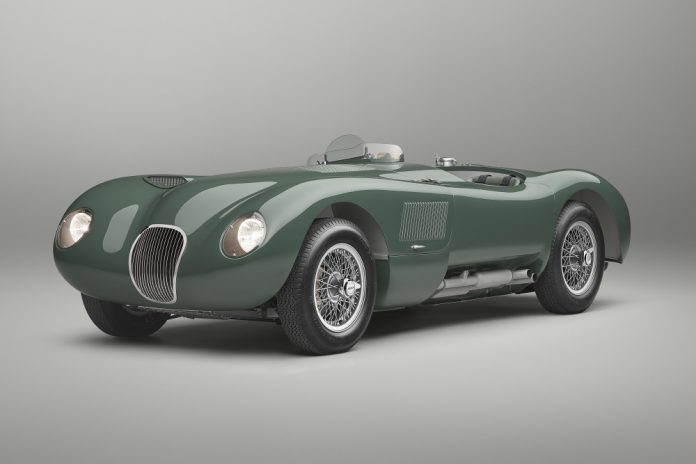 Jaguar Classic is bringing a strictly limited run of new C-type Continuations to life in celebration of the iconic model’s motorsport heritage, 70 years after it first raced to victory at the Le Mans 24 Hours. The landmark vehicle will make its public debut at the prestigious Concours of Elegance at Hampton Court Palace on Friday 3 September.

The C-type Continuation will be hand built at Jaguar Classic Works in Coventry, to the specification of the 1953 ‘works’ C-types that dominated that year’s Le Mans 24 Hours, scoring the C-type’s second Le Mans win and continuing a run of motorsport success for the company.

The team at Jaguar Classic has painstakingly researched the C-type’s history for the Continuation’s exacting specification, bringing Jaguar’s heritage to life through modern technology and engineering expertise.This includes the use of the same authentic techniques and build methods as in period.

Of the 53 Jaguar C-types built in the 1950s, 43 were sold to private owners, and production C-type specification was more like that of the 1951 Le Mans competing cars, limited to drum-braked cars with twin SU carburettors and 200bhp.

The first C-type Continuation cars will be built ahead of a racing-inspired celebration event for their owners in 2022. Each example will reflect the 1953 Le Mans-winning works team car specification, including its 3.4-litre straight-six engine with triple Weber 40DCO3 carburettors, producing 220bhp, and the groundbreaking disc brakes that contributed to the record-breaking triumph at the 1953 Le Mans 24 Hours.

The Jaguar Classic team with its myriad of documents and references will deliver another continuation vehicle with unparalleled attention to detail and craftsmanship.

For the 3.4-litre straight-six engine, each of which takes nine months to construct, the Weber carburettors are all meticulously refurbished to an exacting standard, while other details in the engine bay are in-period, such as the Plessey hydraulic pump on the gearbox that pumps hydraulic fluid into the brakes.

The attention to detail extends to elements such as the brake fluid reservoir, which on the original cars featured brackets that were designed for its application in another vehicle. For the C-type, they serve no purpose, however, all Continuation cars will retain this original anomaly.

Similarly, 1953-specification C-types featured a different Lucas fusebox cover to previous C-types from 1951 and 1952. All Continuation cars feature reconditioned original versions of the correct design that Jaguar Classic sourced, while the Lucas rear-view mirrors fitted to all C-type Continuations have also been sourced as part of an exhausting treasure hunt for authentic components. At the start of the process, just one was available, but Jaguar Classic sourced enough originals to ensure every Continuation features an in-period Lucas rear-view mirror, to complement the three-quarter Brooklands race screen and Smiths clocks in the cockpit.

The original-spec clocks and gauges are an illustration of the hours of craftsmanship that go into creating a C-type Continuation. Not only are they faithful to the originals, but the way in which they are integrated – including the surrounding switches – is an example of the fine and delicate attention to detail that Jaguar Classic engineers employ to create the perfect example.

The ignition switch on the C-type Continuation also embodies this approach. The precisely re-engineered component replicates the original’s start-up procedure, with reliable and high-quality components used to ensure operation is as it should be, every single time. The task of intricately reproducing the rev counter ahead of the driver including the way it revs counter-clockwise, has also been carried out with the emphasis on authenticity and originality.

For all C-type Continuations, materials have been sourced for the interior that respect and reference the original’s heritage, effortlessly and effectively blending old with new, to ensure authenticity while also providing a high quality and reliable finish for owners. Hardura trim is used for the cockpit, retrimmed to a new level that wasn’t found on the original C-type, but trimmed in silver to evoke the period item.

The Rexine finish on the dashboard and side panels of the Continuation cars, is from the last roll of this type of material available, providing as authentic an ambience as possible by delivering the same type of finish from 70 years ago.

The seats, finished in a choice of eight leather hues, are upholstered by Bridge of WeirTM, and are complemented with racing harnesses – fitted to a newly constructed component behind the rear bulkhead to comply with FIA regulations. A Bluemel steering wheel is true to the original with no roundel affixed to the centre – it was omitted from the original race cars to reduce glare and reflections – however customers can specify the iconic Jaguar badging if they desire.

All C-type Continuations are FIA-approved, with eligibility in participating historic race championships, including the Jaguar Classic Challenge, which races at Le Mans, Spa-Francorchamps and Silverstone. To comply with regulations, the C-type Continuations will be fitted with FIA-approved Harness Retention System and rollover protection, effectively integrated into the rear bulkhead, also reassuring for those customers just looking to enjoy on track or closed-road use.

Other FIA-required fitments include a fire extinguisher with engine and footwell extinguishers, neatly controlled by in-period additional toggle switches in the cockpit.

Owners have 12 exterior colours to pick from, including Suede Green, Cream, Pastel Blue and British Racing Green, and the opportunity to enhance the exterior to their own specification with door roundels finished in White or Old English White.