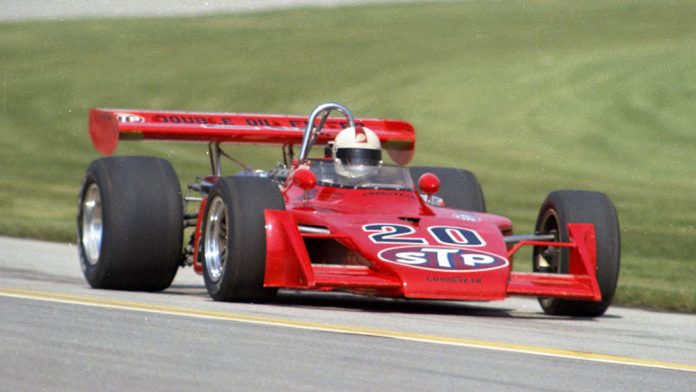 The Rolex Monterey Motorsports Reunion is recognized for featuring car groupings that span diverse eras of motorsports history with rarely seen cars revving back to life. And next week will be no exception.

For the first time, a dedicated historic Indy Car group – which originally competed between 1963 and 1978 – will be running in an exhibition all four days of the Aug. 12-15 annual Monterey gathering.

The introduction of rear-engine Indy Cars, starting in Indianapolis in 1963, changed the game. From 1965 on, there would not be another front engine winner of the Indianapolis 500.

Three-time Indy Car Champion Bobby Rahal knows a thing or two about Indy Cars. Rahal, who also won three consecutive Indy Car races at WeatherTech Raceway Laguna Seca beginning in 1985, and who has Rahal Straight at the track named for him, will debut his recently restored 1966 Eagle with a 255 4-cam Ford V-8 engine at the Rolex Reunion.

“The roar of authentic Indy Cars navigating the WeatherTech Raceway Laguna Seca circuit will be music to the ears of race fans. This exhibition will be something special that can’t be found anywhere else, which is a hallmark of what the Rolex Monterey Motorsports Reunion has come to represent.” – Barry Toepke, director of heritage events and public relations at WeatherTech Raceway

Three Indianapolis 500 winning cars will be at the track. The 1964 Indy winning Watson, driven to victory by A.J. Foyt; the 1970 Indy winning Colt, piloted by Al Unser; and the 1973 Indy winning Eagle which captured the checkered flag with Gordon Johncock at the controls (see above).

Another winner on display includes the 1964 Lotus Type 34, which Parnelli Jones drove to victory at Trenton in 1964 and A.J. Foyt in 1965 to a remarkable seven poles and three victories during the 1965 USAC Championship season.

Also making an appearance will be the 1975 McLaren M16E-001 which was raced at the three 500-mile superspeedway races by Johnny Rutherford as the #2 Gatorade entry with its best finish of second at the 1975 Indianapolis 500. Joining the McLaren will be a 1968 Eagle Mk IV, which started Team Penske’s Indy Car program 53 years ago.

Spectators will also be treated to seeing the 1978 Penske PC-6, which was driven by Tom Sneva in the 1978 USAC Championship season on track. Sneva posted six 2nd place finishes and 12 top five finishes to win the National Championship in 1978 without winning a single race.

“Fans will be treated to a quality collection of Indy Cars all under one tent,” said Ellen Bireley, who curated the historic Indy Car heritage display. “They will be able to view these historical jewels up close. I personally am grateful the owners agreed to share these treasures with the fans.”

The Rolex Monterey Motorsports Reunion features several new family fun activities. In addition to the incredible collection of race cars in the paddock and on track, there is a go-kart track in the Hagerty Marketplace where families can experience the thrill of sitting behind the wheel of their own kart, in addition to other engaging areas.

From individual day tickets to full VIP hospitality packages, there are myriad options available to experience the Rolex Monterey Motorsports Reunion. Complete information may be found at WeatherTechRaceway.com or by calling the Tickets and Accommodations specialists at 831-242-8200.