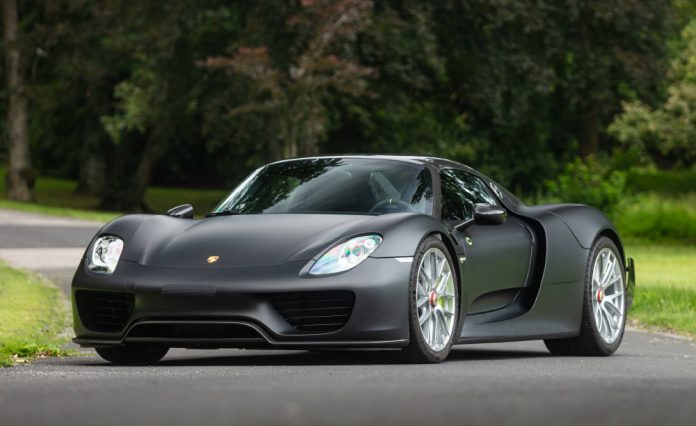 In the Porsche 918 Spyder, alongside contemporary rivals such as the Ferrari LaFerrari or McLaren P1, the motoring world witnessed the unveiling of three of the fastest and most accomplished road cars ever produced within a single, glorious 12-month period. 2013 will surely go down as a landmark year in terms of hypercar production, an indelible memory that marks the shift of the world’s most renowned automotive marques towards accepting the transition to carbon neutrality. With hindsight, we could even look back on 2013 as the year that internal combustion engine powered vehicles—and possibly even hybrids—began to approach the autumn of their lives.

Moreover, and again viewed alongside the LaFerrari or P1, the 918 is represents Porsche’s bid for one-upmanship within the hybrid hypercar generation. Ever since the birth of the automotive industry, manufacturers have sought to eclipse one another by producing ever-more-powerful and hence, ever-faster cars. Whether one considers the diminutive 1.5-horsepower Benz Velo of 1894, the 1910 Isotta Fraschini Tipo KM—widely accepted as the world’s first 100 horsepower road car—or the formidable 618-horsepower McLaren F1 of the early 1990s, all have to a greater or lesser degree contributed to motoring’s most enduring game of striving to improve on rival marques. As the 918 demonstrates, this spirited competition is to the benefit of driving enthusiasts worldwide.

A DISTINCTLY PORSCHE APPROACH TO THE FUTURE

Perhaps unsurprisingly, given their historical tendency to focus on chassis and suspension dynamics rather than out-and-out power, it was the Porsche which was the least powerful of the three hybrid hypercars of the era—although at 887 horsepower, the 918 Spyder was hardly deficient in this respect. Crucially, however, this output was generated from two separate-but-complementary power sources: a conventional naturally aspirated 4.6-litre V-8, derived from Porsche’s hugely successful RS Spyder Le Mans Prototype programme, and two electric motors working independently on both front and rear axles. Remarkably, the petrol engine alone exceeded the power output of the 918’s 603-horsepower predecessor, the Carrera GT, while the electric motors provided an additional 286 horsepower between them. The facility of both power sources operating in tandem also enabled the 918 to achieve standard-setting levels of both emissions and fuel economy as a result.

As if to underline the credentials of this remarkable technological tour de force, the 918 also featured a 6.8 kW/h liquid-cooled lithium-ion battery, permitting it to run purely on battery power alone for around 12 miles if required. Ingeniously, this battery pack could be recharged by a variety of means once exhausted: via the petrol engine itself, by regenerative power harvested whilst braking, or indeed by conventional mains electrical supply.

Inevitably, technology abounded in other areas of the car as well: a carbon fibre-reinforced plastic monocoque chassis featured active suspension, rear-wheel steering and an intelligent four-wheel drive system which automatically transitioned into two-wheel drive mode above speeds of 165 mph. The 918 also featured Porsche’s race-bred PDK dual-clutch system, which in effect allocated one clutch to odd numbered gears and another to even. This permitted one gear to be pre-selected whilst another was engaged, thereby greatly increasing gearshift times and avoiding interrupting the torque supply to the driven wheels.

Performance was, predictably, otherworldly. Porsche’s official factory figures suggested a 0 to 60 mph time of 2.5 seconds and top speed of 216 mph, although independent magazine tests subsequently proved these to be, if anything, conservative. Although the heaviest of the three hypercar contenders, the 918 could comfortably out-accelerate the other two from rest; the prodigious deployment of electrical energy at low revs contributed to a peak torque figure of some 944 pound-feet, almost 50 per cent more than both the P1 and La Ferrari could muster.

THE 918 SPYDER’S MOST PERFORMANCE-FOCUSED INCARNATION

For those considering the “standard” 918 Spyder to be insufficiently attention-grabbing, Porsche also made the car available with their Weissach performance package. While the fundamental mechanics of the car remained unaltered, it shed some 40 kilograms in weight—almost a third of which was saved by using Weissach-specific magnesium alloy wheels—as well as gaining numerous aerodynamic improvements, including an extended rear diffuser and drag-reducing rear winglets. A reduction in the amount of cabin sound-deadening material saved further vital weight, while the detachable targa-style roof panel and rear wing were both left unpainted both to illustrate their carbon fibre construction and to emphasise the car’s competition heritage.

It was in Weissach form that factory test driver—and 2016 Le Mans winner—Marc Lieb took a 918 Spyder around the Nurburgring Nordschliefe in a barely believable 6 minutes, 57 seconds in September 2013, in so doing recording the first ever sub-seven-minute lap for a series production car and reducing the existing record by no less than 14 seconds.

An original German-market—and hence European-specification—car, the example offered here departed the Zuffenhausen factory on 19 December 2014, complete with a distinctive black wrap finish on top of its black bodywork. The cabin was finished in black Alcantara with acid green piping, the latter complementing the similarly coloured brake callipers and external lettering. Other notable factory options fitted include a Carrera GT sound system with DAB Digital Radio, satellite navigation system, air conditioning, and Porsche’s vaunted (and practical) front end lifting system; the last of which can be deployed at the push of a button in situations where additional ground clearance is required.

Offered for sale directly from its original owner, chassis 0219 remains in immaculate, original condition, having covered just 3,697 kilometres from new at the time of cataloguing. Fastidiously attended to by Porsche Zentrum Stuttgart during this time, the car has covered fewer than than 850 kilometres since its most recent service in November 2019, and is accompanied by original factory documentation and accessories, 918 crystal model, electric charging accessories, and individually numbered artwork.

While cars of the future may well eclipse the 918 Spyder in performance terms, there is a strong likelihood that this will be achieved using single-source alternative power units, rather than hybrid systems or any form of conventional internal combustion engine. For this reason, the 918 Spyder may come to be seen as the beginning of the end of an era—adding a dimension of historical significance to a special automobile that already makes for an undeniably appealing, and thrilling, acquisition.