August 3, 1962: The Day on Which Dan Gurney Writes His Own Legend 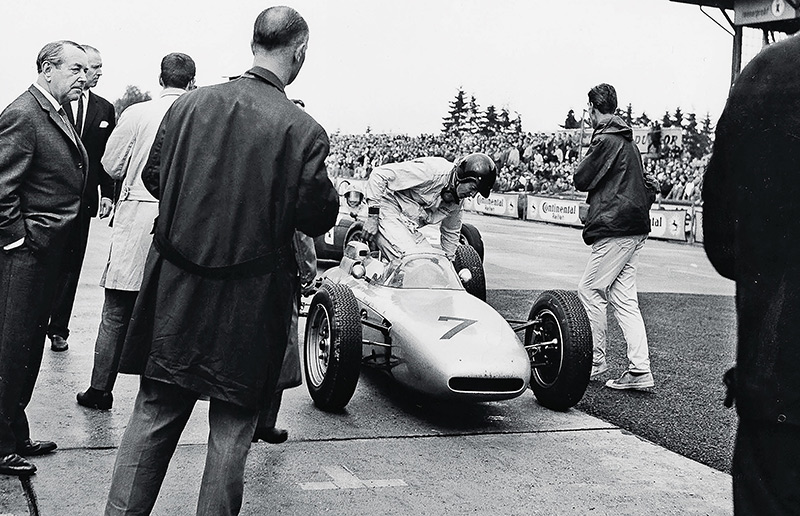 Nürburgring, qualifying for the German Grand Prix, August 3, 1962. The day on which Dan Gurney writes his own legend is a Friday.

Gurney’s pole-winning lap for the German Grand Prix—8:47.20—is an astonishing eight seconds faster than that of the previous year. A milestone, accomplished with his Porsche 804. And not the only one to his name, as Gurney is the catalyst of other changes as well. Whenever and wherever car races are held today, they culminate in a ritual that he invented fifty years ago: “When I won the classic race of all races at Le Mans in 1967, the atmosphere was so great that during the award ceremony I had the idea of spraying the champagne I’d won.” In that moment of joy, he invented the champagne shower.

Born on Long Island in 1931, Gurney won forty-eight of 303 races, including seven victories in Formula One cars. In 1962 he won the French Grand Prix in Rouen in an eight-cylinder Porsche 804—the only win by Porsche as the vehicle manufacturer in the Formula One World Championship. He drove for the team in 1961 and 1962 and owed a debt of gratitude to the squad: “It was with Porsche that I really learned how to drive—because they gave me cars that didn’t constantly break down and I could lay down the kilometers faster than ever before.”

Porsche also became an important fixture in Gurney’s personal life: he married the secretary of Porsche racing director Huschke von Hanstein. Gurney and wife Evi have been together for over fifty years. That’s more than half a century in which he has proven himself a brilliant race-car driver time and again. He invented the Gurney flap, a small, upward-pointing flap on the trailing edge of the rear wing that makes the car more aerodynamic. For over two decades he worked on an “alligator motorcycle,” with a one-cylinder engine and an exceedingly low-slung seat for the rider. Not to mention his wins in Le Mans and Sebring and appearances in multiple Hollywood films. Gurney also excelled as a team director and became the only American to win a Formula One race with his own creation at the 1967 Belgian Grand Prix in Spa. The variety of his victories in different series can only be compared with that of Mario Andretti. Victory eludes him in his 1962 campaign on the Nordschleife, notwithstanding his spectacular pole lap. His battery comes loose in its mount, forcing Gurney to hold it with his foot throughout the race. Nevertheless, he manages an impressive third.

Onboard Lap – Porsche Taycan Sets Record at the Nürburgring-Nordschleife