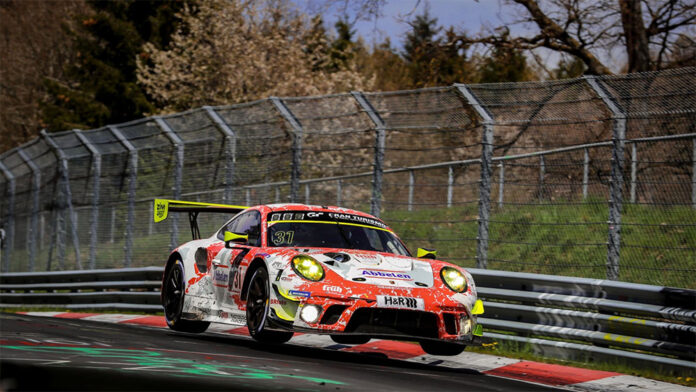 The sun has warmed the Eifel air to a pleasant 18 degrees Celsius. Today, the dry asphalt of the infamous Nürburgring-Nordschleife offers plenty of grip. Works driver Mathieu Jaminet has warmed the tyres of his Porsche 911 GT3 R up to the optimal temperature. His race engineer looks at the GPS data: the next lap promises to have little traffic and perfect conditions for a fast time in the “Green Hell”. He radios to the cockpit: “Push this lap!” Jaminet is only too happy to oblige. The Frenchman selects an engine mapping for maximum performance of the 500+hp four-litre flat-six at the rear of the GT3 racer. He checks the brake balance and traction control settings and he’s off. Awaiting him is 25.378 adrenaline-filled kilometres.

“When I hear those words come over the radio, I have to grin inside my helmet because every driver loves getting such a message. Then the time has come for complete concentration and to become one with the vehicle and the racetrack,” says Jaminet, describing how he feels as he goes into “max-attack mode”. The 26-year-old heads off on his flying lap with excitement, suspense and a healthy respect for the partly narrow and convoluted Nordschleife with its more than 70 corners. “Around Hatzenbach, we kerb-hop as much as possible, then comes a long passage that I really like: we take Hocheichen, Quiddelbacher Höhe and Flugplatz right through to Schwedenkreuz flat out – almost like flying in a trance. The section from Pflanzgarten 1 over Sprunghügel and Stefan Bellof S to Schwalbenschwanz is just as exhilarating. We drivers only experience such a feeling on the Nordschleife.”

Everything has to come together for the perfect lap

To turn a perfect lap on the 25.378-kilometre combination of the Grand Prix circuit and the Nordschleife, everything has to come together. Nearing the eight-minute mark is only possible if the setup basics have been done properly. The Eifel mission demands special solutions. The rear wing of the Porsche 911 GT3 R can measure only 1,800 millimetres in width – ten centimetres less than the conventional version for circuit racing. When the vehicle is stationary, ground clearance must be at least 70 millimetres at all times. A double flic at the front of the GT3 racer from Weissach helps to stabilise the aerodynamic balance.

“On conventional racetracks, the Porsche 911 GT3 R generates most of its downforce via the front splitter. However, the effect of this component greatly depends on the ground clearance – and that varies hugely on the Nordschleife with all its jumps and compressions,” explains Patrick Arkenau. The experienced engineer from the Manthey-Racing team sits in the so-called Porsche “Battle Room” during the Nürburgring 24-hour race. This is where the data from all of the customers’ 911 GT3 R racers is collated. Arkenau and his colleagues analyse the information and advise on how to optimise the performance or strategy.

The details in the search for performance

“The so-called double flic at the front flanks ensures a steadier aerodynamic balance because it generates downforce on its upper side and thus acts independently of the respective ground clearance,” he explains. For the drivers, an unfailingly predictable car is of utmost importance. On the Nordschleife, driveability takes precedence over maximum performance – at least most of the time.

“Of course we adapt the car for really fast laps, for example in the top qualifying. Changed spring rates, modified shock absorber characteristics, toe settings and anti-roll bar setup, optimising the wing angle and the rake of the car,” says Arkenau, listing the adjustments in the search for speed. It takes maximum downforce to reach the limit in the many fast and semi-fast corners for a perfect lap. “Because of the greater downforce and the subsequent higher drag, the driver loses a lot of time on the long straights such as Döttinger Höhe or Bergwerk to the so-called Mutkurve – the ‘courage curve’. They have to overcompensate for this in the corners with maximum downforce – for instance in Hatzenbach and around Hohe Acht, Wippermann, Brünnchen and Pflanzgarten. In several of these passages, drivers can cut over the kerbs more, but in many other places, the kerbs are a no-go zone – not even during a flying qualifying lap,” emphasises Arkenau. Jaminet adds: “Sometimes we’re really brutal over the kerbs. Everyone does it now. Today’s cars can withstand that without a problem. It saves a lot of time, and that’s what it’s all about.”

From Sebastian Golz’s perspective, two sections are decisive: “Look at the Bergwerk section, one of the track’s slowest corners,” explains the Porsche 911 GT3 R Project Manager. “The name of the game there is to straighten the car up very quickly and maintain a lot of traction. The driver has to hit the throttle very early because there’s a steep climb of around 210 metres to Karussell. If the driver doesn’t manage to accelerate out of Bergwerk well and early, the car will literally starve to death and be left in the dust on the way up. Those who can catch a draft up the hill can win critical metres over their competitors.” Lapping traffic plays a huge role in the race and in all sessions aside from the individual time trials.

“As soon as the car accelerates out of Schwalbenschwanz, getting a clear run to Galgenkopf is critical,” states Golz. “Highly efficient aerodynamics plays a very important role at this point because Galgenkopf leads onto the Döttinger Höhe. If you’re too close to the car in front in this corner, you’ll struggle with dirty air which affects the aerodynamics – and the car loses downforce. If the driver then has to slow down even slightly at Galgenkopf, the section from Döttinger Höhe to Tiergarten will be very tough. For about two kilometres it goes flat out, including a left-hand kink that is taken at almost 270 km/h,” says Golz. “On the long straight, you see very quickly whether a driver wins or loses ground.”

As strange as it may sound, it is often in precisely this section that cars from the less powerful classes come to the rescue: Thanks to their lower drag, they sometimes achieve higher top speeds along the Döttinger Höhe than the GT3 cars contesting the top SP9 class, even though their lap times are slower. “If several cars push the air aside, it can make a massive difference: the higher top speed can give an eight or nine-tenths of a second advantage on the Döttinger Höhe alone,” says Patrick Arkenau, estimating the effect of the slipstream on the Nordschleife’s longest straight.

The start-finish line is “the moment of truth”

Shortly after the Döttinger Höhe, the Antoniusbuche and Tiergarten passages comes the start-finish line – the line where the stopwatch shows the score. “The moment of truth,” Jaminet smiles. “But this moment always leaves you feeling strange. Was I quick? Was that really the limit? Often I don’t even know myself. It’s unique on the Nordschleife: as a driver, you never have the feeling you’ve managed a perfect lap. Personally, I’m empty after such a qualifying attack and I have the feeling I’ve somehow survived the Nordschleife, with its high risks and sometimes being on the verge of flying off the track. First, it all has to sink in. It always takes me a while for this to happen. I only come to my senses after a couple of minutes in the pits,” laughs the Frenchman.

“We engineers are always amazed at what the drivers can achieve when they know that everything is at stake. What these guys do with the car is incredible,” says Patrick Arkenau, in admiration of the work these top racers do at the wheel. Data provides him with a deep insight into their work. Do some drivers push too hard? Are the risks too high? Should the engineers sometimes protect the drivers from potential recklessness and overconfidence? “If you ask five people about these concerns, you’ll get five different answers,” Arkenau smiles. “In my opinion, there’s no doubt that the drivers are the only ones who can truly assess what’s going on. So let them do it. From the outside, we have no idea what’s happening and how the car feels in each situation. Only those at the wheel know where the limit is in that moment.”