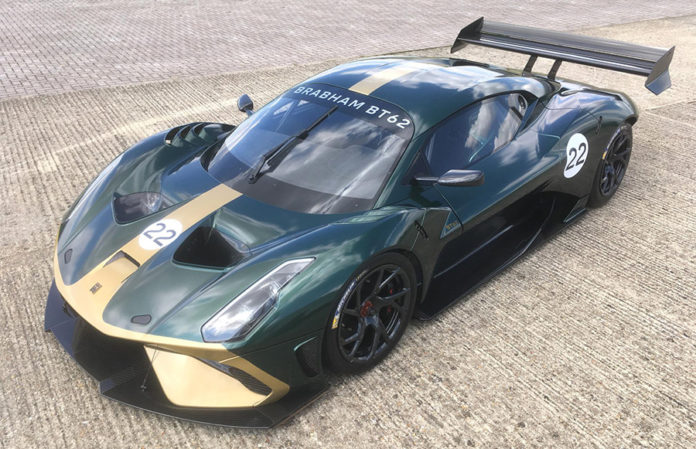 Celebrating one of the most important countries in its racing and family history, Brabham Automotive is teaming up with Michelin to debut the sensational Brabham BT62 in the United States, with a fitting tribute to American hero and ex-Brabham Formula 1 winner, Dan Gurney, at this year’s Monterey Car Week.

Fresh from its public dynamic launch in Europe at the Goodwood Festival of Speed, the Brabham BT62 is set to win the hearts and minds of the American public at a series of prestigious events on the Monterey Peninsula. Working in conjunction with technical partner Michelin, the car will be center stage on the tire manufacturer’s stand at Laguna Seca on Friday, August 24 and Sunday, August 26. Over the week the car will also appear McCall’s Motorworks Revival on Wednesday, August 22, and at the Exotics on Cannery Row on Saturday, August 25.

In an exclusive for Monterey Car Week, the BT62 will be proudly sporting a new tribute livery, in honor of Dan Gurney, the first ever driver to win a Formula 1 Grand Prix in a Brabham racing car. Finished in Brabham’s distinctive Green and Gold colors, it’s an homage to the Brabham BT7 that Gurney steered to victory at the French Grand Prix of 1964. A highly successful racing driver, race car constructor, and team owner in his own right, Gurney was the racer Sir Jack Brabham chose as his first team mate for his fledgling Brabham racing team back in 1963.

Heralding the start of an exciting new chapter for the iconic marque, the BT62 has been designed from the ground-up to feature a host of unique engineering details and draws on the project team’s vast experience to create a car without equal. Crafted from lightweight carbon fiber, the BT62’s exterior surface and aggressive aerodynamic package combine to strike the optimal balance between function and form. Pure-bred for the track, the car is powered by a Brabham naturally-aspirated 5.4 liter capacity V8 engine, boasting a power-to-weight ratio of 730ps per ton and a dry weight of just 972kg.

The launch of the Brabham BT62 in the United States coincides with the marque’s 70th anniversary – a period which has brought Brabham, the team and the family, great success around the world, and no more so than in North America. The scene of countless Brabham victories and firsts over many years, North America holds a special place in the family’s heart.

Proudly presenting the Brabham BT62, a car truly worthy of carrying the iconic Brabham name, triple 24 Hours of Le Mans winner, two time American Le Mans Series winner and Brabham Automotive founder David Brabham, will be at Monterey for the week of celebration of the next chapter in the evolving Brabham story.

Speaking ahead of the BT62’s Monterey Car Week debut, David Brabham said, “I’ve enjoyed great success in the United States over the course of my racing career, as did my father, Sir Jack, and brother Geoff Brabham, who is a member of the Motorsport Hall of Fame of America. As a country, the US holds great significance for the family, and continued importance for the Brabham racing dynasty, and we’re proud to be showcasing the car to the world’s most discerning motoring enthusiasts at Monterey Car Week.”