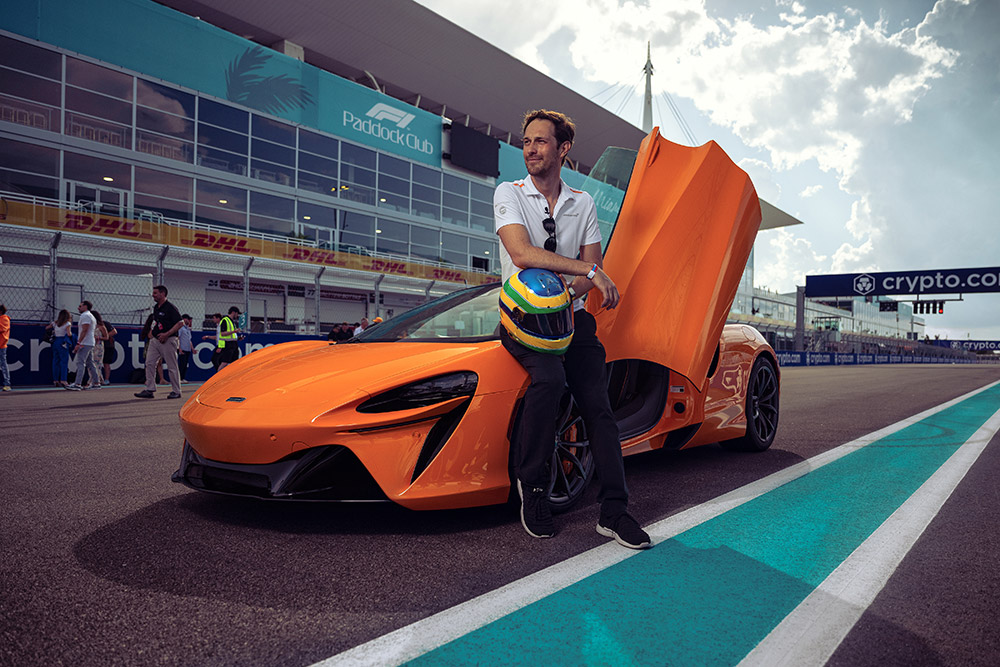 Twenty-one years ago, the legendary Ayrton Senna won his final US Grand Prix driving for McLaren at the Phoenix street circuit in Arizona. This week, his nephew Bruno Senna became one of the first drivers to lap the brand-new Miami GP circuit, at the wheel of the all-new McLaren Artura.

The laps around the new 5.41km (3.36-mile) purpose-built Miami International Autodrome, with the iconic Hard Rock Stadium at its heart, marked the dynamic debut of the McLaren Artura in North America, which is set to become the largest market for the High-Performance Hybrid (HPH) supercar when customer deliveries begin in July.

With its 19 corners and three straights including elevation changes over an exit ramp and under various flyovers, together with three DRS zones, the circuit provided Bruno with plenty of opportunities to fully exploit the handling and performance of the Artura which, as McLaren’s first ever series-production hybrid supercar, delivers both torque in-fill to maximise acceleration and full EV driving capability.

“It was truly amazing to be able to push the McLaren Artura around this dynamic and free-flowing new Grand Prix circuit in the heart of Miami. The Artura is a car that keeps on giving, especially on a track; it’s smooth and refined but with an aggressive edge that is just waiting to be discovered as you utilise the E-motor combined with the powerful V6 engine. It’s predictable and fun – the perfect ride for a Grand Prix weekend.” – Bruno Senna, McLaren Ambassador and race car driver

Built on the all-new McLaren Carbon Lightweight Architecture, which is uniquely optimised for HPH models and produced in-house at the McLaren Composites Technology Centre in the Sheffield region of the UK, the Artura features an all-new hybrid powertrain that comprises a twin-turbocharged 3.0 litre V6 engine, axial flux E-motor and energy-dense battery pack, which in combination with McLaren’s super-lightweight engineering philosophy delivers electrification without compromise.

With power and torque outputs of 680PS (671bhp) and 720Nm (531lb ft) respectively, the Artura can accelerate from 0-60mph in 3.0 seconds and has a maximum speed of 330km/h (205mph). An all-new lightweight eight-speed transmission combined with a new rear suspension design, uprated electro-hydraulic steering and Proactive Damping Control enhance the traditional agility, stability and dynamic performance for which McLaren road cars have become renowned.