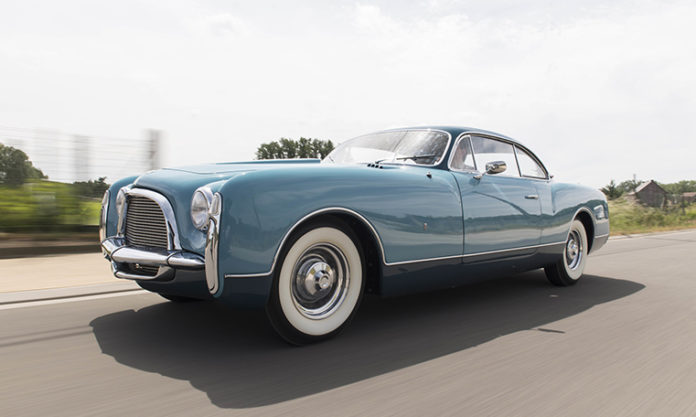 First is the legendary 1956 Maserati A6G/54 Gran Sport Spider by Frua. With a hat-tip to Alfieri (the leading force behind the founding Maserati brotherhood) and a reference to the straight 6-cylinder cast-iron (ghisa in Italian) engine block, the A6G was a shining jewel in the A6 line-up, which was considered by many to be one of the finest series of Maserati ever made. In sporty and highly desirable Spider configuration coachbuilt by Frua, this factory prototype example is exceedingly rare – just one of nine, and has been expertly restored under the supervision of Maserati maestro Adolfo Orsi. Testament to its authenticity and quality of workmanship, it was Class Winner at the prestigious Concorso d’Eleganza Villa d’Este and is without a doubt one of the best of its kind extant

Next is a 1957 BMW 503 Cabriolet by Bertone that is, amazingly, just one family from new. One of 13 examples delivered new to the US, this matching-numbers Cabriolet with an all-alloy body coachbuilt by Bertone is also the recipient of an outstanding restoration and has clinched a bevy of awards as confirmation: Best in Show at the Santa Fe Concorso, Class Winner at the Amelia Island Concours d’Elegance, Pinehurst Concours d’Elegance Award, Pebble Beach Concours d’Elegance entrant, and more.

The 1953 Chrysler Special by Ghia is the product of an extraordinary cross-Atlantic collaboration. Involving Virgil Exner from Chrysler and Mario Boano from Ghia, the resulting Special was unveiled at the 1952 Paris Motor Show to grand acclaim. The Chrysler importer to France decided to commission 18 cars, of which eight are known to survive today. This particular example was delivered new to industrialist Leon Coulibeuf, a gentleman driver who also raced at Le Mans alongside Jean Behra the same year he bought this car. The Special was shown in period at a prominent concours d’elegance by Coulibeuf’s wife and in later years has been shown at the Louis Vuitton Concours d’Elegance, the Concorso d’Eleganza Villa d’Este, and the Zoute Grand Prix.

These remarkable mid-century motorcars will be offered at the highly anticipated Bonhams Quail Lodge Auction scheduled for Friday, August 18th. This year marks the 20th anniversary of Bonhams’ collector car sale during the Pebble Beach/Monterey Car Week and is held in conjunction with the Quail Motorsports Gathering in Carmel, California.

By: Bonhams | Photos Courtesy of: Bonhams/Litwinski