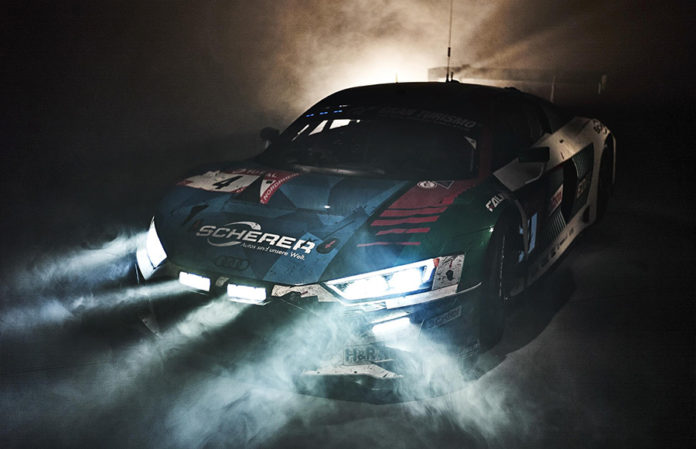 The race car in which Pierre Kaffer, Frank Stippler, Dries Vanthoor and Frédéric Vervisch won at the Nürburgring on June 23 was neither a new nor a one-year-old car, but a two-year-old one: almost exactly two years before its victory at the Nürburgring, the Audi R8 LMS with chassis number AS4SAFGT201700089 started its maiden race, round three of the Blancpain GT Series Endurance Cup. The 6-hour race was held at Le Castellet on June 24, 2017. At that time, Audi Sport Team ISR fielded Audi for drivers Jamie Green, Frank Stippler and Kelvin van der Linde. To date, the car has done three tests and completed twelve races with four different teams, including the 24 Hours of Spa twice, the 24 Hours of Nürburgring twice and the California 8 Hours at Laguna Seca twice. By the time the last checkered flag fell, this Audi R8 LMS had covered a total distance of 18,539 miles at qualifying and racing speed within the space of two years. 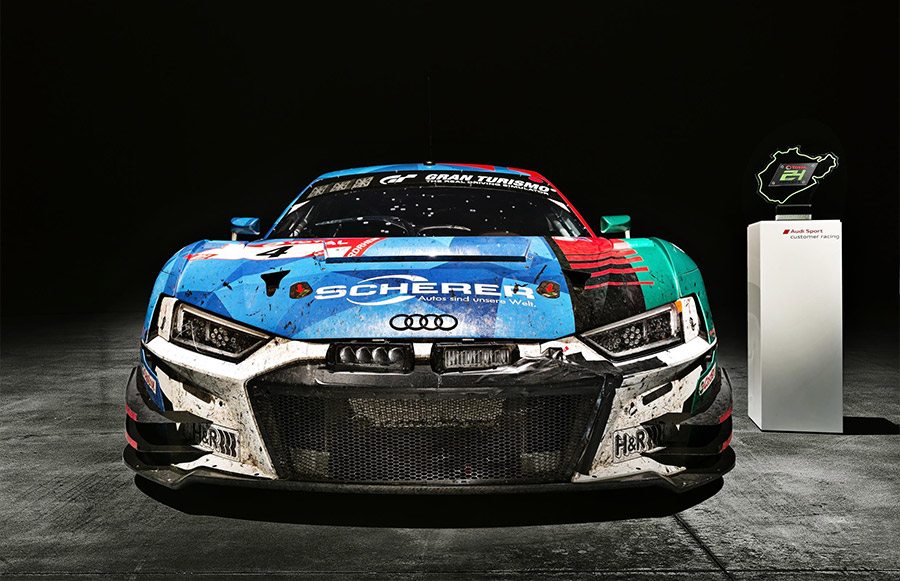 “This statistic is not only a nice success for Audi Sport customer racing, but also sends a message to our customers,” says Chris Reinke, Head of Audi Sport customer racing. “In our strategic commitments, we definitely rely on ‘used cars’ and demonstrate the success that can be achieved with them. However, the greatest benefit to our worldwide customers is the durability of our engineering design.” The production-based GT3 race car shares 50 percent of its components with the production model. The ASF multi-material chassis of aluminum and CFRP is produced at the same manufacturing facility as the production model, at Böllinger Höfe of Audi’s Neckarsulm site. The quality of the lightweight design is excellent as well: the race car tips the scales at merely 2,722 lbs, but has to weigh 2,888 lbs in the Nürburgring 24 Hours due to the regulations. 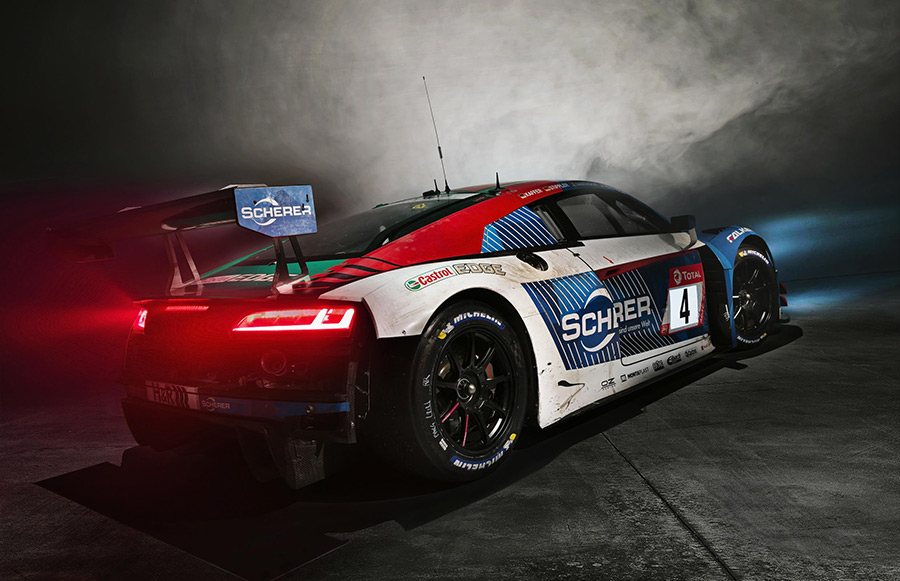 The V10 engine is almost completely production-based. With service intervals of 6,213 miles and rebuild intervals of 12,427 miles, the customer racing car makes particularly economical operation possible for the teams. The powertrain in the winning car had already run for 3,106 miles before the event at the Nürburgring began. The rating of the race car, which serves to put all competitors on a similar lap time level, results in a variation: on the roller dynamometer, the V10 engine produces merely 487 horsepower at the Nürburgring on account of the mandatory air restrictor, while the production model delivers 27 percent more output, that is 620 horsepower. Thus, in the engine output ranking in the SP9 class, the Audi R8 LMS was in the second to last spot at the Nürburgring. In other words: the GT3 race car, that was the second-weakest in the field due to the regulations, won the race thanks to its above-average concept. 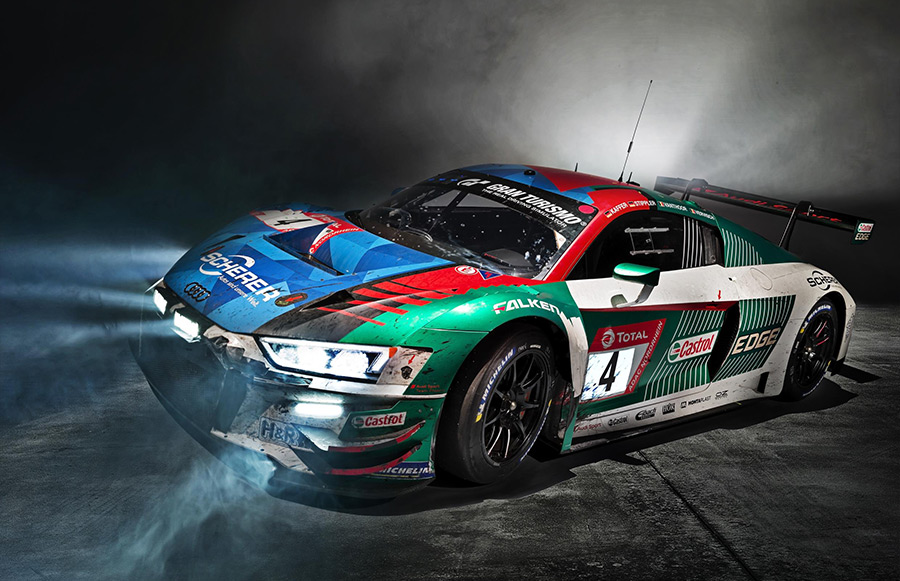 The Nordschleife of the Nürburgring is a 15.769-mile roller coaster track that is respected by drivers from all over the world and keeps proving its “Green Hell” character. In spite of these tough conditions, Audi – unlike other manufacturers – made only minor modifications to adapt the race car to the Nordschleife. The prescribed ground clearance of 70 millimeters means that the GT3 sports car lies about one centimeter higher above the tarmac than on other race tracks. As a result, as well as due to the 100 millimeter slimmer rear wing prescribed by the regulations, aerodynamic downforce is reduced. Even so, the sports car remains easy to drive. The entire team of race engineers and drivers delivered an impeccable performance at the event. 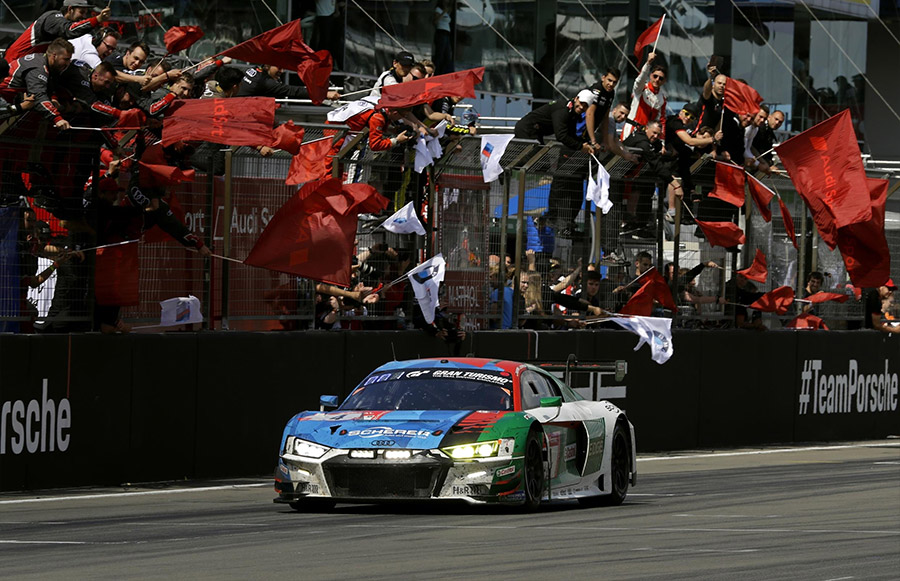 Other Audi race cars were successful in the iconic 24-hour race as well: Third place went to Audi Sport Team Car Collection of Marcel Fässler/Christopher Haase/René Rast/Markus Winkelhock. The cockpit of the second Audi from Phoenix Racing was filled by two amateur drivers – Kim-Luis Schramm and Vincent Kolb – who together with two other drivers clinched a remarkable seventh place overall thanks to the car’s good drivability. Four gentleman drivers from Team Car Collection Motorsport, who only occasionally contest races, clinched the 15th position in the field of 155 entrants, demonstrating the qualities of the Audi R8 LMS. Like all other customers, they benefited from the most recent evolution: Since 2019, a new aero package has enhanced handling stability once more. In addition, improvements have been made to increase the race car’s durability and consistency even further. 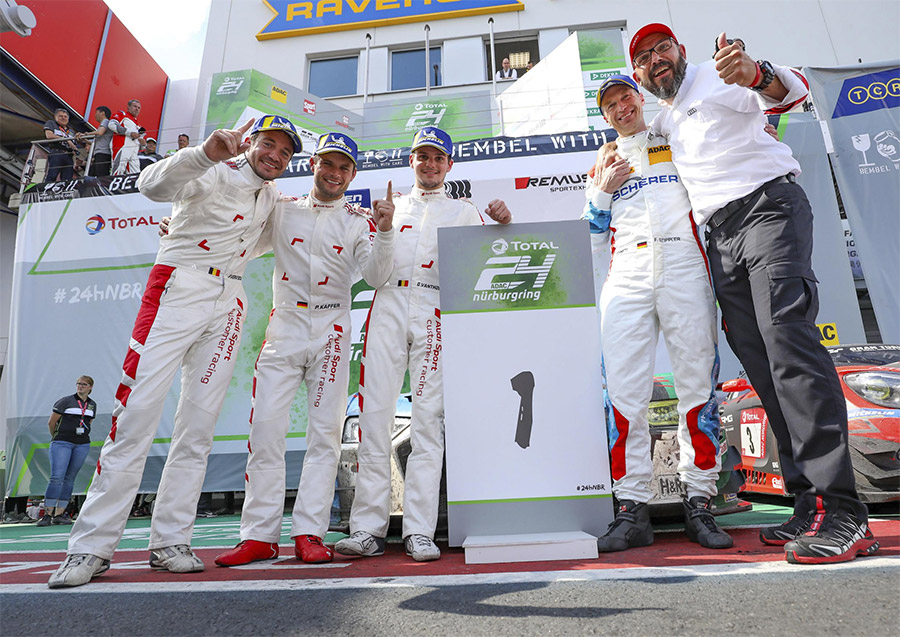 So, what will happen to the race car of the winners now? Audi Sport customer racing proves its close ties to customers and sponsors in this respect, too: Audi Sport will sell the original winning car to an interested partner, just like the brand did when victory was clinched two years ago.

With its second 24-hour race victory within the space of just six months following its successful debut in Dubai in January and 13th overall victory in a 24-hour event, the Audi R8 LMS ranks among the best models worldwide. More than a dozen manufacturers offer GT3 cars for customer racing. Another competition is coming up soon. Just five weeks after the Nürburgring, the next major 24-hour race – at Spa – is on the calendar. Audi has won the iconic event in the Ardennes four times since 2011.

Petrolheads Have Rare Opportunity to Drive a Genuine Jordan ...