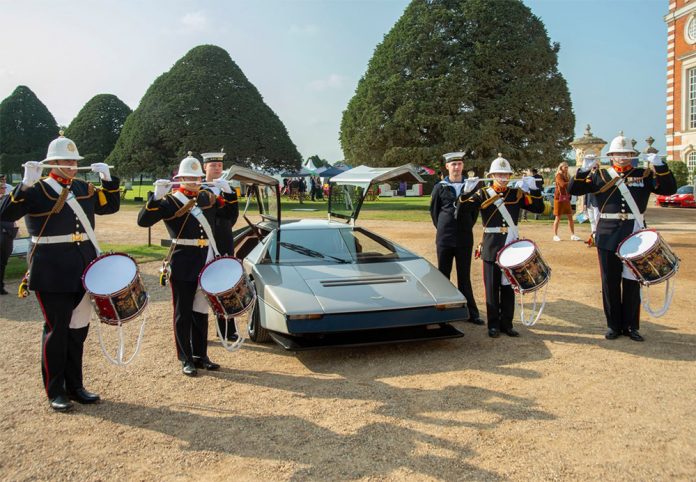 Two Royal Naval apprentices today unveiled the fully restored 1980’s Aston Martin Bulldog super car, which is planned to run at 200mph, a feat that it never had the chance to achieve in period.

Following an 18-month total nut and bolt restoration which saw technicians at Classic Motor Cars in Bridgnorth, Shropshire, spend more than 6,000 hours working on the car, which caught the headlines of the world’s media in 1980, and then disappeared.

Aston Martin planned that the car would become the fastest production car ever, running at 200mph. But it fell short at just 191mph and due to financial constraints, the project was axed.

“It became something of a mythical beast,” said project leader Richard Gauntlett, whose father Victor Gauntlett, was Managing Director at Aston Martin when Bulldog was axed in the 1980’s.

He added: “It disappeared from view when it was purchased from Aston Martin by a Middle Eastern buyer. Over the years Bulldog was ‘sighted’ in various locations around the world before turning up in the United States where it was bought by Phillip Sarofim, who has flown to the UK for the unveiling of the car.”

the Royal Naval Air Station at Yeovilton, unveiled the car after the world-famous Corps of Drums from the Band of Her Majesty’s Royal Marines, Portsmouth (The Royal Band), carried out a “Mess Beatings” to announce its presence.

The apprentices were accompanied by Warrant Officer Baz Firth MBE who said, “it was an easy choice to select these two AETs to help unveil the Bulldog as it was an excellent opportunity to recognise and reward their good efforts and for them to see the engineering involved in such a special restoration.”

David Barzilay, who looks after PR and Marketing for CMC said: “It seemed fitting to involve the Royal Navy. CMC is an employee-owned Trust which over the years has run an Apprentice Programme, as have the Royal Navy. Our engagement with the Senior Service will see apprentices from Yeovilton, where testing of the car takes place being involved. CMC apprentices will be involved when Bulldog visits a Royal Naval warship.”

He added: “It will mean that old technology will meet the Royal Navy’s latest technology. Two UK icons coming together in a unique picture shoot to be announced shortly.”

Nigel Woodward who has masterminded the restoration of the famous car said: “We have had a team of 11 people working on the car for the last 18 months. When we received the car, it didn’t look too bad. But closer inspection revealed that there was a great deal to do. It was decided to carry out a full nut and bolt restoration.”

He added: “The car had received damage by being lifted at some point, by a forklift truck. It had not been run for years, and immediately became apparent that many parts would have to be rebuilt if it were to run at 200 mph”.

Nigel said: “We have tried to be as faithful as possible to the original design and concept by not only returning the car to its paint and trim scheme, but also engineering the car in such a way that major mechanical components are now located as the designers originally intended. This, and future proofing the car so that it remains drivable now for ever, has been achieved by incorporating state of the art engine management systems and modern components such as liquid cooled turbochargers which will ensure that Bulldog is preserved for future generations.”

He added: “We were fortunate in having a great team and being able to work with two of the original engineers Keith Martin and David Morgan, as well Lizzie Carris the wife of the designer of the car, William Towns. This gave us a huge head start on the project and there help was invaluable to the completion of the car.”

Phillip Sarofim the owner of the car who entrusted the project to Richard Gauntlett and to the team at CMC said: “Richard and the team at CMC have done a great job. The car looks truly amazing.  Now we must work on the tests which will be carried out by Aston Martin racing driver Darren Turner to make sure that it reaches the 200mph, I have every confidence we will achieve it.”

He added: “I am proud to be the custodian of Bulldog which is a true British icon and delighted that young people are involved in and will be inspired by this project both from a Royal Navy and CMC perspective.”