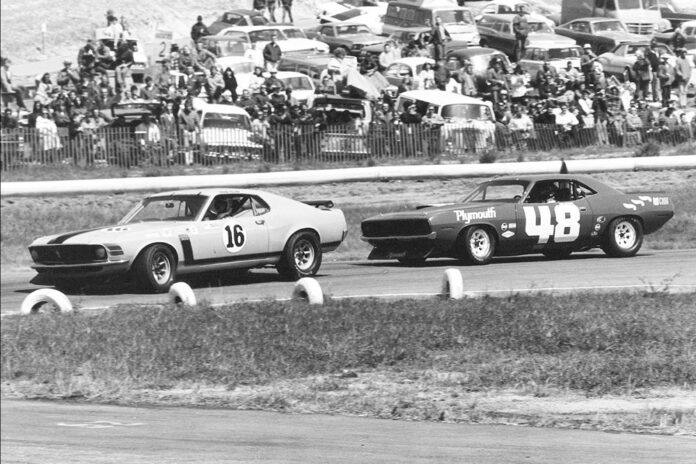 As WeatherTech Raceway Laguna Seca celebrates its 65th racing season, we take a look back at some of the legendary characters who helped mold the mystique of the now world-renowned race track. The 1970s saw an explosion of horsepower burst onto the Laguna Seca circuit. The decade saw many big-time races take place at the track, and one of the men at the forefront of any race he competed in was George Follmer. Follmer competed in nearly every racing organization, including Formula One, NASCAR, INDYCAR, 24 Hours of Le Mans, Trans-Am, IMSA and Can-Am. In 1972, Follmer became the first and only driver ever to win both the Trans-Am and Can-Am championships in the same year. His first Can-Am race that year came about when Mark Donohue was injured, and Roger Penske called upon Follmer as a temporary replacement to drive Penske’s Porsche 917/10. He went on to dominate the 1972 season by winning nine of 14 races. Follmer clinched the Can-Am Series championship at the Monterey Grand Prix at Laguna Seca on Oct. 15, 1972 at an impressive average speed of 108.79 mph on the tight 1.9-mile circuit. “I loved driving at Laguna Seca, and clinching the Can-Am championship there made me love it even more,” Follmer recalled later in his career. “That was a very significant moment in my racing career, especially when I started the season without a ride.” Follmer continued his decade of dominance when he won the 1978 Monterey Triple Crown race of the IMSA GT Championship series. Behind the wheel of a Porsche 935, Follmer proved that regardless of the ride, he was a Laguna Seca legend. “I liked the old track layout best because it was a true test of a driver to be able to hold your foot down around there,” Follmer said in reference to the original 9-turn configuration that had a high-speed sweeper that extended from present-day turn 2 to turn 5. “It was a real challenge to go fast there and not everyone could do it. I won Can-Am, Trans-Am and IMSA races there and that place will always be one of my favorites.” Everything came full circle for Follmer at WeatherTech Raceway Laguna Seca in 2021, when he and friend/racing rival Parnelli Jones were honored as the grand marshals for the Rolex Monterey Motorsports Reunion that was featuring the 55th anniversary of Ford in Trans-Am.

As Follmer was making his mark on four wheels at Laguna Seca in the 1970s, “King” Kenny Roberts was doing the same on two wheels. Roberts, a native of Modesto, Calif., made himself right at home in Monterey. He won the 1974 and 1975 Monterey Superbike International races at Laguna Seca, with the 1975 victory helping to propel him to his second consecutive AMA Grand National championship. Known for his fearless style, Roberts became a fan favorite – not just in the United States, but around the world. By the time Roberts took the final checkered flag of his career – in 1984 at Laguna Seca – he had amassed an incredible résumé that included seven wins at Laguna Seca, three world championships, two national championships, 32 AMA National wins and 24 Grand Prix wins. He is a member of the Motorsports Hall of Fame of America, the International Motorsports Hall of Fame and the AMA Motorcycle Hall of Fame.

While Roberts was just getting his legendary career started in the mid 1970s, there was another event at Laguna Seca debuting – one that would become a legendary, world-renowned gathering. You know it now as the Rolex Monterey Motorsports Reunion, but in 1974 when Steve Earle organized the first version, it was called the Monterey Historic Automobile Races. While the modern Reunion typically features 400-500 cars, the first gathering in 1974 attracted just 66 entrants. However, AutoWeek gave the event enough pre-event publicity to legitimize it and draw a respectable crowd. It was then that Earle decided to return in 1975 – and the rest is history. In 2017, the Rolex Monterey Motorsports Reunion won the FIA Founding Members’ Heritage Cup for Motorsport Event of the Year, the first event at an American venue to receive the prestigious award. This August, the Rolex Reunion will kick-off a yearlong celebration leading to the 2023 centennial of the 24 Hours of Le Mans, the world’s most prestigious endurance race. As part of the tribute, visitors will be treated to the largest gathering of authentic Le Mans-winning and raced cars ever assembled in America.