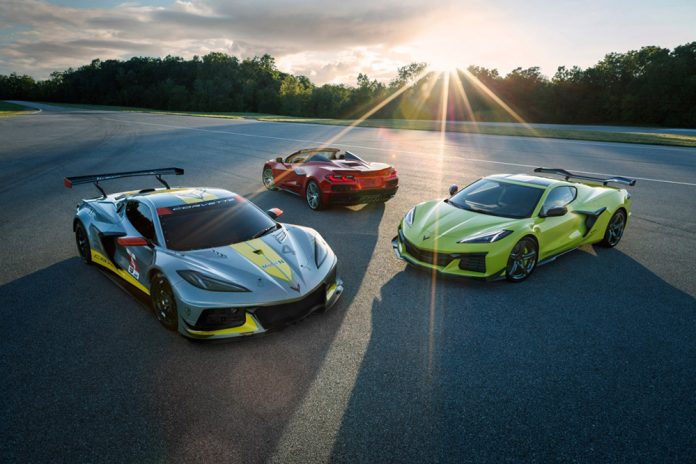 The 2023 Corvette Z06 is about to share that secret code with the world.

Based on the mid-engine C8 platform introduced for the 2021 model year and developed in conjunction with the Corvette C8.R racing car that is on the brink of clinching a second consecutive GT Le Mans class title in the IMSA WeatherTech SportsCar Championship, the C8-generation Z06 is the most capable and track-focused Corvette ever.

The new Z06 features a 5.5-liter, flat-plane crankshaft “LT6” V-8 that produces 670 horsepower and revs to an astounding 8,600 rpm, driving through an eight-speed, dual-clutch automatic transmission. The LT6 engine is hand-assembled at the Performance Build Center within the Corvette’s Bowling Green Assembly Plant in Kentucky.

The Z06 also includes upgraded brakes, a 3.6-inch wider track, the latest version of General Motors’ magnetic ride control, and aerodynamic and styling elements shared with the Corvette C8.R that races in IMSA.

Calling the Z06 the most capable Corvette ever is saying a lot. Since Chevrolet got serious about positioning “America’s Sports Car” to compete both on and off the track on a worldwide basis starting with the C5 generation in the 1990s, the Corvette has been honed into a very capable performance machine. Corvette Racing is an increasingly important part of that process.

“It’s difficult to imagine what the Corvette brand would look like without the Corvette Racing program,” said Tadge Juechter, Corvette Executive Chief Engineer. “For more than 20 years we have been working toward total integration of the race and street-car teams.

“Endurance racing provides us with a treasure trove of information in any number of areas – aerodynamics, engine performance and chassis, to name a few. That kind of real-world data is highly valuable to production engineers and designers, and we have made great use of those lessons from the racetrack. It really improves our products and resonates with our fan base and Corvette owners.”

While the C6 and C7 generations of the Corvettes incrementally refined the successful front-engine C5 platform, the switch to mid-engine architecture with the C8 opened a new world of performance possibilities both on and off the track. Corvette Racing was integrated into the development of the street version of the C8 from the start of the project.

Internally, the C8.R has been referred to as “the Z06 hiding in plain sight.” The racing car shares its chassis with the Z06, and it also served as a development tool for the LT6 engine. It’s no surprise that the Z06 features a howling exhaust note similar to the C8.R.

“Racing was the reason the Z06 was developed in 1963, and it continues to support the development of the road models that make them better on the street and the track,” Juechter said. “It also means we have tested the Z06 on the best tracks around the world, from Circuit of The Americas here in the United States to the Nurburgring in Germany.

“Virtually every component that distinguishes the Z06 was designed to enhance its capability,” he added. “By leveraging the mid-engine architecture’s inherent advantages, we are able to achieve 6 percent more downforce than a seventh-generation ZR1 at 8 percent lower drag.”

A key figure in developing both the C8.R and the Z06 was longtime Corvette Racing driver Oliver Gavin. The 49-year-old Englishman, who retired from the cockpit earlier this year, amassed 204 racing starts in Corvettes from 2002-2021, winning seven IMSA championships and 51 races, including five class victories at the 24 Hours of Le Mans, six at the Mobil 1 Twelve Hours of Sebring and one Rolex 24 At Daytona.

Gavin frequently joined test drivers and engineers from GM in assessing the C8 Z06 in a racetrack environment, including the legendary Nurburgring Nordschleife. The 12.9-mile track winding through the Eifel Mountains hosted the Formula One German Grand Prix through 1976, and with more than 170 turns, is a favorite venue among car manufacturers worldwide for chassis development.

“It offers such a wide variety of corners, loading, and high-grip/low-grip situations,” observed Gavin. “It has banked corners, yet there are other low-grip corners where you’ve got to be really balanced with the way you load the car into the corner and apply the power. It’s bumpy in places and smooth in others.

“So it’s a one-stop shop. It’s almost an intimidating place that you try to conquer, and if a car performs well there, it adds value to the product.”

“My first couple miles were on the road, driving from the GM Engineering down to the actual track,” Gavin said. “Once I switched it into Track mode, everything about it – just the way it rolled down the road, the noise of the motor and my position in the car – it all had that race car feel, and in my head, all the memories were coming back.

“From the first turn, the way the front axle loaded and went through the corner and the way the rear axle was so set and stuck, it instantly builds confidence,” he added. “The ability to drive the Z06 on the limit, I think people are going to get so much from it.”

Gavin said the most amazing aspect of the Z06 is how it added to the already remarkable handling capabilities of the standard Corvette Stingray while in Track mode, while remaining equally drivable and docile on the street in Tour mode.

“It shows there was so much more headroom for performance with the Z06,” he noted. “They’re both using a common chassis, but the springs and roll bars are a significant step forward in terms of stiffness. But you don’t feel it because of the magnetic ride until you go to the track. In Track mode in the Z06, you really start to feel the racing beast emerge from the car and you can start carving corners with great accuracy. It’s like nothing I’ve ever experienced before.”

Gavin has maintained his role as a Corvette ambassador and will participate in the online launch of the Z06. He recently formed the Oliver Gavin Driving Academy operating from the Bosch Proving Ground near Boxberg, Germany, and will exclusively utilize Corvettes for training purposes.

The C8 is the first generation of Corvette that has been designed for worldwide sale, including right-hand drive versions for England, Australia and Japan. The enhanced capabilities of the Z06 will only enhance the brand’s international value and prestige.

“That’s a big commitment by Corvette to do that,” Gavin said. “I’m delighted because I’m finally going to be able to drive a Corvette at home in the U.K. on the appropriate side of the car!”