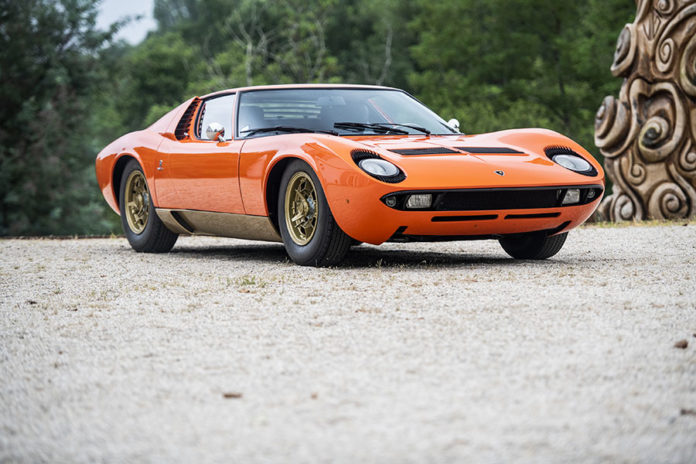 The mighty Lamborghini Miura has been beguiling admirers for over 50 years and remains just as striking today as when it debuted at the 1966 Geneva Salon. In his quest to compete with Maranello’s road cars, Ferruccio Lamborghini needed a distinctive design replete with power and beauty. When his team approached him with plans for a transversely positioned mid-rear engine architecture, he quickly approved development. 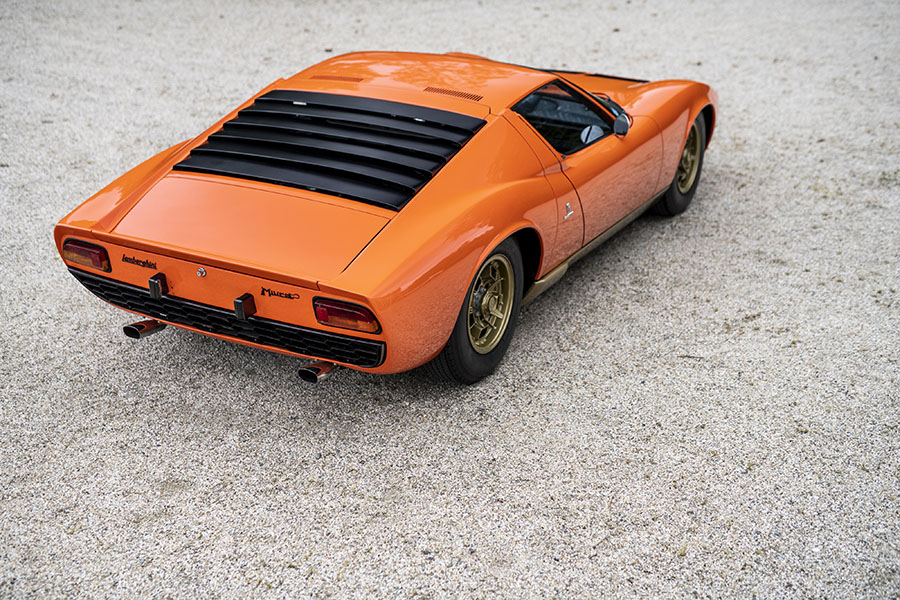 The Miura achieved such breathtaking heights through the genius of several noted luminary designers and engineers, with Gianpaolo Dallara’s chassis powered by a V-12 engineered by Giotto Bizzarrini, and clothed with coachwork penned by the great Marcelo Gandini of Bertone. Early prototypes were honed through extensive testing by development driver Bob Wallace, eventually allowing performance to match the car’s aesthetic brilliance. With such an all-star cast of creators, it’s no wonder the Miura was a smashing success, as it convincingly challenged Ferrari’s supremacy in the premium Italian market while forwarding the concept of the mid/rear-engine production sports car. 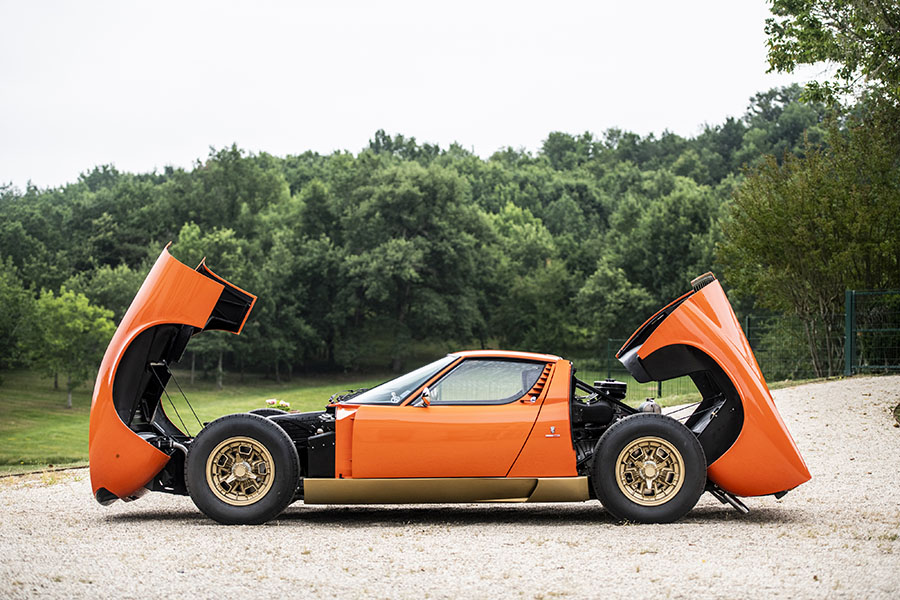 Benefitting from a series of restoration measures over the last 30 years, and retaining its original factory-equipped matching-numbers V-12 engine, this sensational Miura is one of the finest P400 examples to be offered in many years. According to the combined records of factory archives, the Lamborghini Registry, and Joe Sackey’sLamborghini Bible, chassis no. 3171 was fitted with engine no. 1415, becoming the 80th example completed. As the first 124 examples of the P400 utilized a thinner-gauge chassis frame than later cars, this early Miura is legitimately one of the rare lightweight examples that are often preferred by knowledgeable collectors. 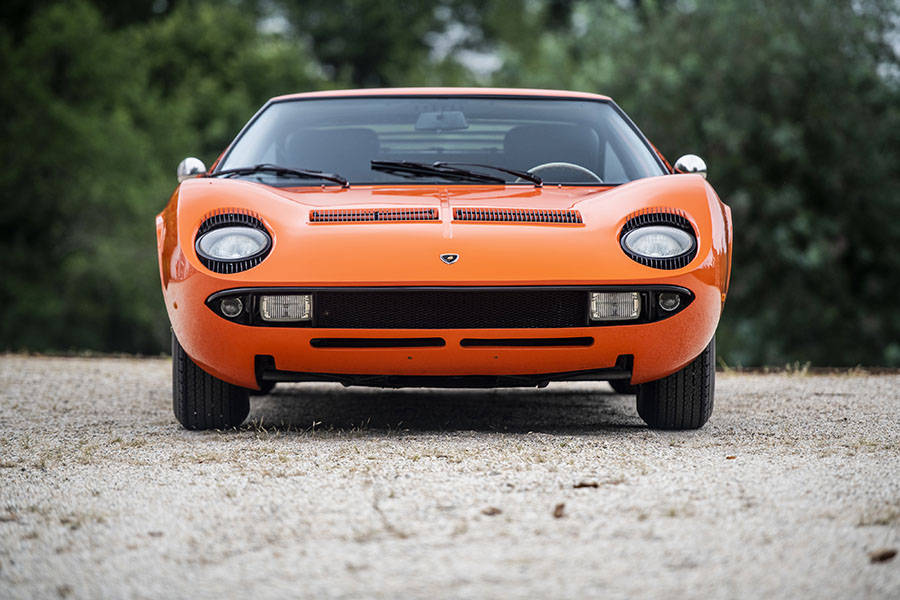 Originally finished in white paint over a black interior, this Lamborghini was completed in mid-October 1967 and distributed to Voitures Paris Monceau, a marque concessionaire in France. While the Miura’s midlife history is currently unknown, the car is believed to have remained in continental Europe until the 1980s, when it relocated to the United Kingdom. 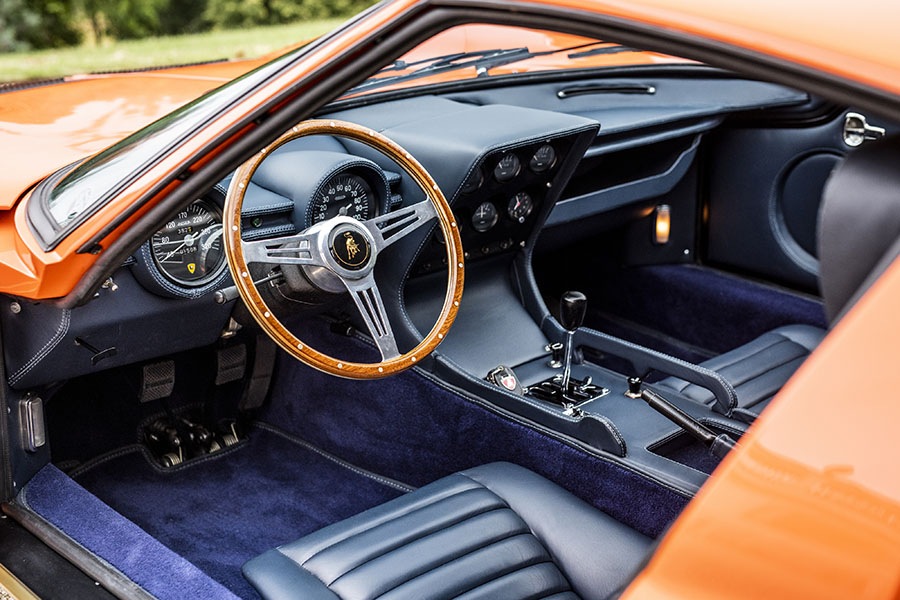 By 1989 the Lamborghini was purchased by John Britton of Birmingham while in a state of mid-restoration, and he spent most of his ownership sympathetically refurbishing the car. According to his own written account and a file of invoices, Britton installed a precisely fabricated bonnet (including work by Land Rover Works), while Alscot Garage stripped the body and primed the exterior for a deep coat of paint in Lamborghini orange applied by RS Panels. The interior was also reupholstered in French Blue leather by the respected Suffolk and Turley, making for a distinctive color combination straight out of the Swinging Sixties. The brash appearance was completed with gold sills and gold-finished Campagnolo alloy wheels. 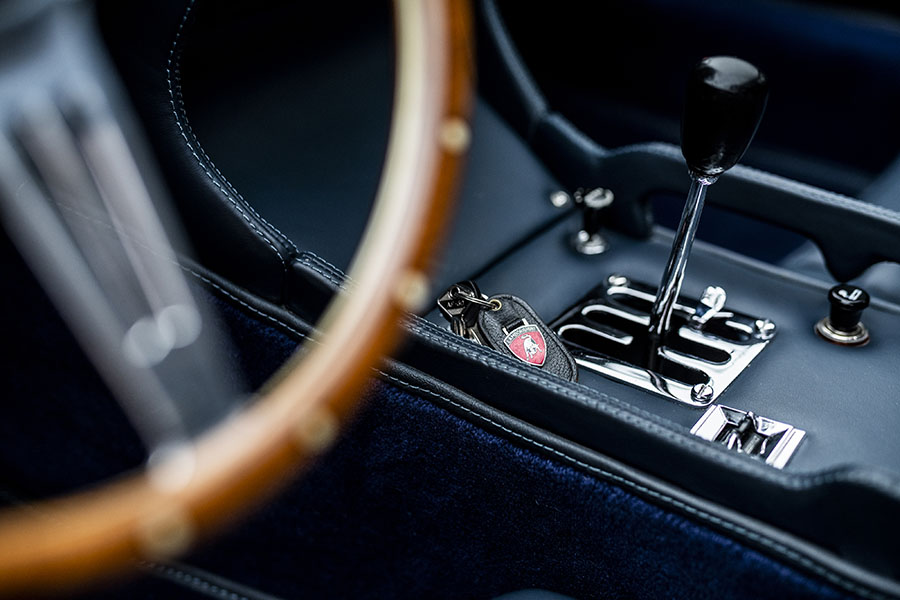 Nicol Transmissions rebuilt the engine and gearbox, including new valves, forged pistons, and Lamborghini liners. The heads were machined, and the crankshaft was crack tested. The Weber carburetors, brakes, and clutch were rebuilt, while a correct ANSA exhaust system was fitted. Miura specialist Colin Clarke was ultimately commissioned to dial in the engine using original Lamborghini diagnostic equipment. Mr. Britton then transferred the registration of his Ferrari 400 to the Miura, which continues to wear the serendipitous “400 NO” British tags to this day. 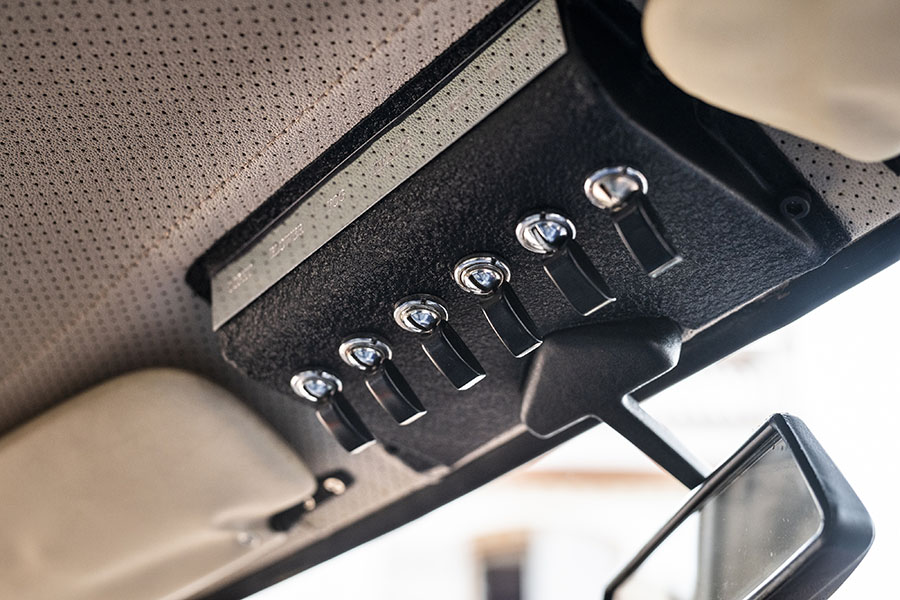 After enjoying 15 years of preservative care, the Miura was sold by Mr. Britton in 2004 to fellow countryman Mark Baxtrem of Cleveland. As confirmed by numerous invoices on file, Mr. Baxtrem continued to invest in the Lamborghini’s restoration, retaining Mr. Clarke to conduct a four-year refurbishment that was completed in September 2008. During this complete mechanical freshening, the opportunity was taken to tastefully upgrade the Miura to some of the specifications of the more highly developed P400S model, including a split sump for superior engine preservation and ventilated disc brakes for improved stopping power. 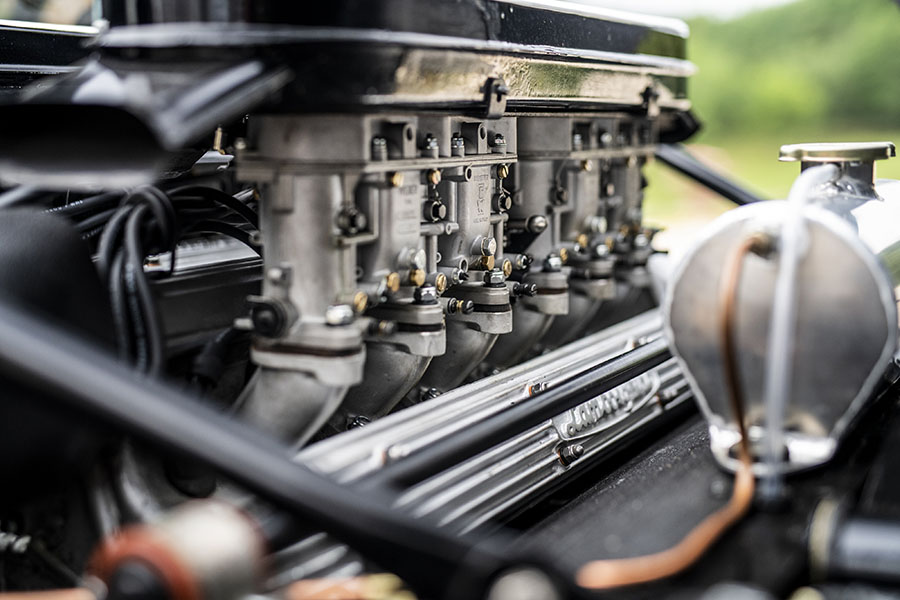 Mr. Baxtrem retained possession through at least late 2009 before selling the Miura to a Spanish collector, and in 2012 the Lamborghini was presented at the Auto Barcelona concours d’elegance, where Lili Bertone (Nuccio Bertone’s widow) was in attendance and was photographed with the car. 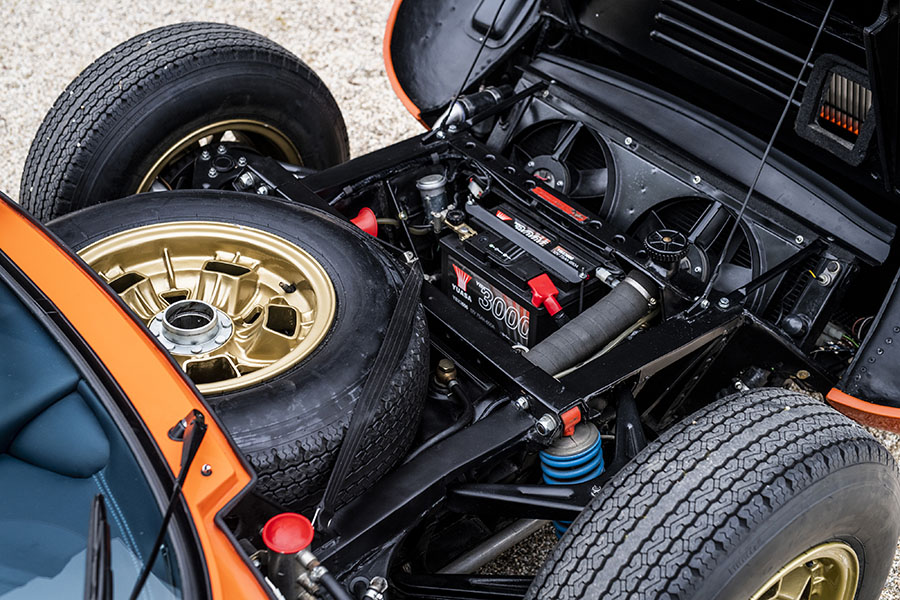 In 2017, the exquisite Miura was sold to the current owner, a respected collector based in France, and he quickly submitted the car to Auto Storica in Barcelona for attention to a few minor issues and a concours-level detailing. He has continued the Lamborghini’s fine record of care, conducting a series of appraisals in 2017 and in turn addressing any noted items or perceived deficiencies in presentation. On the back of these efforts, the Miura was again presented at Auto Barcelona in 2017. 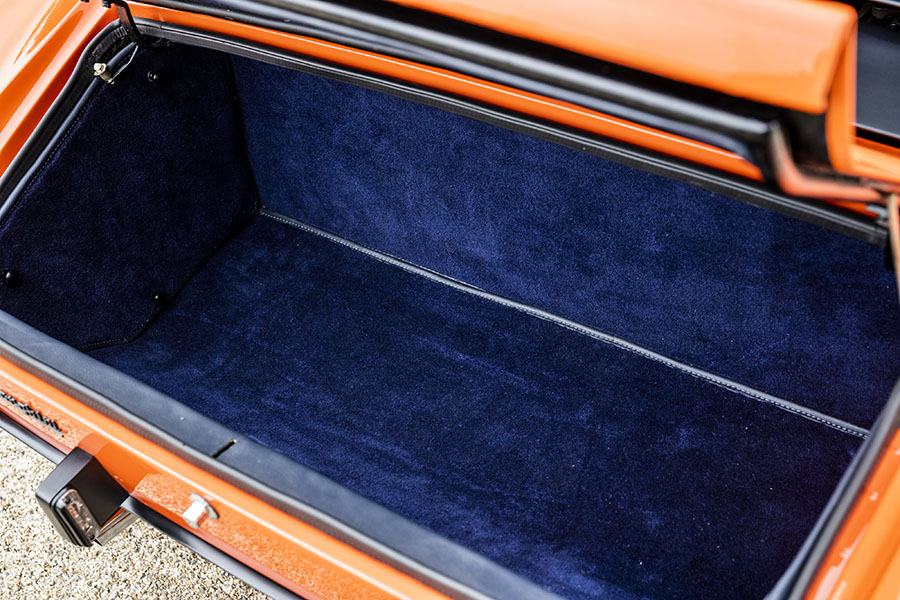 Still scintillating in its bright orange finish and complementary French Blue interior, this early Miura is ideal for further display at finer concours d’elegance, marque celebrations, and Italian car shows. Or the fantastic Lamborghini may be enjoyed on the open road, where the finely tuned V-12 will surely intoxicate the driver with its ferocious performance and distinctive exhaust note. Documented with restoration invoices, factory correspondence with former owners, British test certificates and registrations, and the 2017 French appraisal, this fabulously presented Miura would make a stunning addition to any collection, sure to strike the fancy of marque purists and enthusiasts of important supercars.