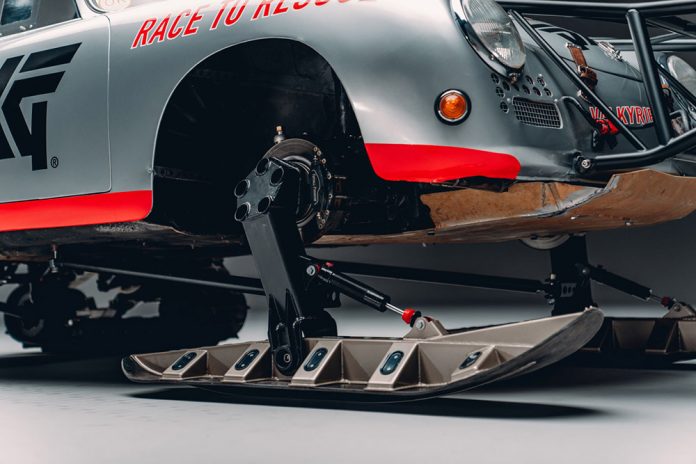 It takes much more than skis to traverse 356 miles of ice in Antarctica – especially if you are driving a 1956 Porsche 356A vintage car. Senior Chassis Design Engineer Kieron Bradley, a UK-based extreme explorer, has spent the past 18+ months re-engineering Valkyrie Racing’s classic vehicle mascot while ensuring the car itself remains both safe and carbon positive to complete the team’s long-awaited adventure. ‘Project 356 World Rally’ is both an expedition and a humanitarian effort, and the December 2021 challenge completes the ultimate endeavor by one woman, one car and one global mission to end child trafficking. (www.valkyrieracing.com)

Denver-based racer and philanthropist Renee Brinkerhoff is the incredibly tenacious woman behind-the-wheel and the anomaly behind a worldwide self-imposed competition that provides a visual means for her voice to support an end to human trafficking.

She chose to take on nearly 20,000 miles over all seven continents – primarily while partaking in globally recognized endurance rallies such as Peking-to-Paris and the East African Safari rally. The rallies additionally provide Renee global media exposure to discuss the problems and solutions for her cause and showcase her charitable foundation Valkyrie Gives. However, the frigid ice of Antarctica requires a different sort of preparation and mindset to conquer the extreme environmental and weather conditions.

While UK-based Tuthill Porsche has held a technical preparation role in nearly all of Brinkerhoff’s endurance rallies, Bradley’s own background as a polar explorer and three times world record holder provides the perfect synergy for the engineering aspects he can offer for this specific venture.

“Success for Renee and her car will come from the thoughtful balance of appropriate technology we’ve added, and the mass reduction implemented,” said Bradley. Because full days of 24 hours of sunlight can be anticipated across Antarctica during this time of year, mass from elements such as lights, framework, fire extinguishers and wheels could be removed, while an increase in mass to accommodate the surface condition of the snow allows for the addition of tracks, ski, and crevasse bars, along with a specialized brace and suspension system.

Bradley further explained that while the mass in the 356 overall has been increased, the mass per square inch (foot print) using the ski and track system, had been reduced to under 4 percent of the standard wheel displacement “The ski we’ve created must do 40 – 50 percent of the work, by compacting and prepping the snow for the track unit to follow over, with the underside blade guiding the direction – this ensures the tracks will not submarine under the light snow,” said Bradley.

LEARNING HOW TO SKI IN A 356
If a pair of skis are only attached at the hub points on the vehicle, the hubs and attaching suspension system would potentially be over stressed and compromised, even under light use. Therefore, Bradley’s solution attached the ski brace bar to the ski leg, transmitting the load away from the hub points and attaching the suspension system. Not only do the aesthetics of the skis look great, but they were also specifically designed to be supported by all the other components and to make less of an impact on the snow than a footprint.

Bradley discounted the use of any tire and proposed the skis and track combination, increasing the flotation by as much as 300 percent when compared to Antarctic 4×4 support vehicles on 42” tires – the 356 will be gliding and leading the tracks throughout the entire journey.

Other significant retrofits include:

Brinkerhoff’s navigator, Jason de Carteret, is a world-record holder in polar exploration and has led more than fifty expeditions including those to both the North and South Pole. De Carteret and Bradley together claimed two world records for the fastest overland journey to the South Pole traveling in the Thomson Reuters Polar Vehicle. Brinkerhoff and De Carteret will attempt to set a land speed record on a blue ice runway in Union Glacier following the 356-mile endeavor. The team’s lead sponsor is global golf research and development powerhouse PXG, based in Scottsdale, AZ.