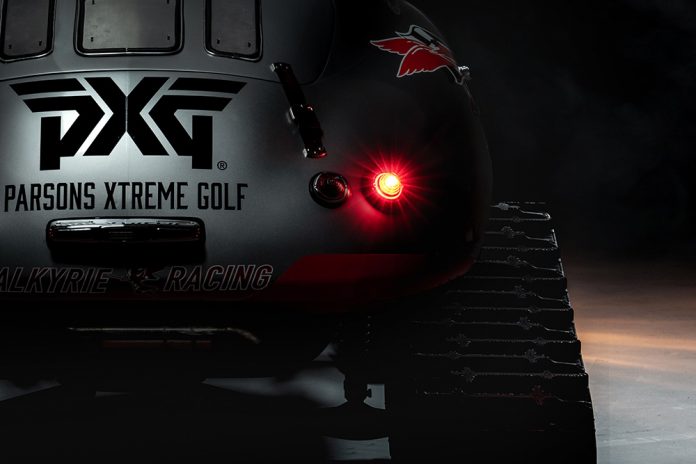 The combination of an adventurous spirit with a passion to support humanity has created an amazing success story for Renee Brinkerhoff, her race team Valkyrie Racing and her non-profit foundation Valkyrie Gives. In the final leg of what has already been an extreme journey, PXG has signed on to support the unique story of one woman, one car and one global mission to end child trafficking.

PXG, the global golf research and development powerhouse founded by American entrepreneur and philanthropist Bob Parsons, will be the lead sponsor for Valkyrie Racing’s Antarctica Ice Challenge taking place in December 2021. The Antarctica expedition is the final frontier of Valkyrie Racing’s ‘Project 356 World Rally Tour,’ an extreme endeavor that has sought to complete nearly 20,000 miles driving a vintage Porsche 356, across all seven continents.

Re-engineering her racecar for Antarctic conditions, Brinkerhoff and her navigator, Jason de Carteret (a world-record-holder in polar exploration), look to accomplish a never-before feat in a vintage car, or any car for that matter. The pair will cover 356 miles of unforgiving ice to raise awareness and funds to combat child trafficking. Additionally, the team will attempt to set a land-speed record on a blue ice runway at Union Glacier.

According to Parsons, who was introduced to Brinkerhoff and Valkyrie Racing through golf, PXG’s involvement underscores the company’s commitment to taking extreme measures in the name of performance and, more importantly, providing hope.

“The Antarctica Ice Challenge is the ultimate intersection of performance and philanthropy,” PXG Founder and CEO Bob Parsons shared. “It’s a true boots-on-the-ground approach to making a difference. With 100 percent of dollars raised going directly to the cause, there was no way PXG wasn’t going to get involved.”

Excited and humbled by the partnership, Brinkerhoff stated, “Bob’s commitment to helping those less fortunate has been a mainstay throughout his career, and his generosity in bringing PXG on board with us is significant in furthering our pursuit to help those who can’t help themselves. We are grateful for the enormous role PXG has undertaken and we look forward to making a global impact together.”

Brinkerhoff is well equipped for this challenging final mission. From off-roading at 16,000 feet in the Peruvian Andes to driving the Gobi Desert of Mongolia to tackling the rough terrain of East Africa, she has successfully logged miles and shattered boundaries around the world.

But her accomplishments go far beyond that of a typical race team. Entering remote villages to speak at orphanages and shelters, engaging hundreds of children, Brinkerhoff provides critical education to help keep high-risk children safe. She also delivers essential supplies and funds to the communities served.

Both Renee Brinkerhoff and her daughter, Christina, who oversees operations for Valkyrie Racing/Valkyrie Gives, have also been fully vetted by a non-government organization (NGO) to partake in worldwide undercover investigative missions that support foreign law enforcement anti-trafficking efforts. These missions contribute to the demise of trafficking rings in areas including Asia and South America.

Since 2017, Valkyrie Racing/Valkyrie Gives’ efforts have raised more than $450,000 with all donations received going directly to frontline organizations that are combatting child trafficking, including those visited in remote areas of China, Mongolia, Peru, and Kenya. The Colorado-based mother-daughter duo intend to grow their forces to support a multi-million-dollar campaign through Valkyrie Gives in the coming year.

THE 1956 PORSCHE 356A –VALKYRIE RACING/VALKYRIE GIVES’ RALLY CAR
Valkyrie Racing’s globally recognized Porsche 356A has been specially prepared and engineered for every endurance event during the ‘Project 356 World Rally’ at UK’s Tuthill Porsche, the world’s leading Porsche 911 rally workshop. To accommodate the delicate balance necessary to achieve a minimal carbon footprint while limiting the susceptibility of breaking through the ice in Antarctica, the car has required further modifications for its final journey. These were developed and successfully achieved by Senior Chassis Design Engineer Kieron Bradley.

Bradley is a UK-based extreme engineer and explorer who, together with De Carteret, set the world record for the fastest overland journey to the South Pole. For the upcoming 2021 Antarctica mission, Bradley created a full light-weight fitment on the vintage car, replaced the subframe, designed and assembled front skis, created unique tracks in the rear, and built a single crevasse bar placed in the front of the car for additional safety. The bar includes a double-sided solar panel to absorb light energy from both snow and sun.

JOIN VALKYRIE RACING IN ANTARCTICA
Valkyrie Racing/Valkyrie Gives has created the ability for a community of supporters worldwide to join them in Antarctica and be part of a ‘once-in-a-lifetime’ experience. The name of each donor who contributes a minimum of $356 will be inscribed inside the hood of the car, receive a photograph of their name, and an exclusive ‘Antarctica Ice Challenge 356’ hat to commemorate their involvement. Donations can be made directly to www.valkyrieracing.com/donate356.

Porsche 356 “No.1” in North America, on its Way to the Rennsport Reunion