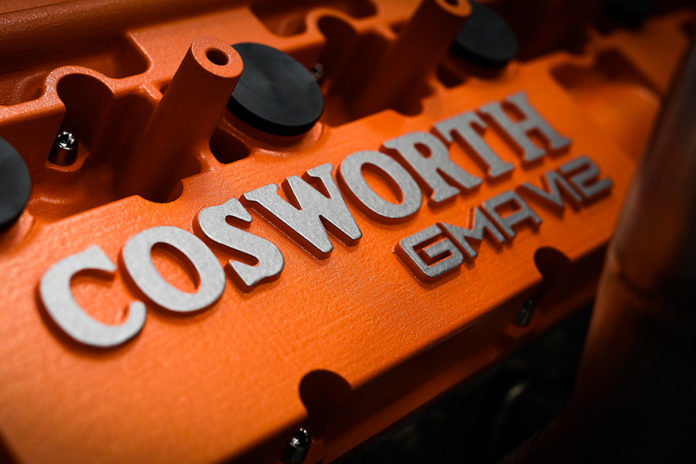 Ahead of the global premiere of the T.50 supercar on 4 August (17:00 BST), Gordon Murray Automotive has confirmed full details of the bespoke Cosworth GMA V12 engine that will power the new model.

The 3.9-litre powerplant will be the highest revving, fastest responding, most power dense, and lightest naturally aspirated V12 road car engine ever. Meticulously designed and engineered, the powerplant combines the immense experience of Cosworth and Murray to be the most engaging, characterful and driver-focused V12 engine ever produced.

T.50 Supercar: A Formula One engine for the road

Professor Gordon Murray CBE: “More than half of any truly great driving experience is delivered by the engine, so right from the start I set the highest possible benchmark – to create the world’s greatest naturally-aspirated V12.

“To be truly remarkable, an engine needs to have the right character; highly-responsive, an amazing sound, engaging torque delivery, free-revving, and it has to be naturally aspirated. For all those reasons, the engine in the T.50 was never going to be anything other than a V12.”

A key part of the brief was to keep the capacity of the T.50’s V12 as small as possible. The original inspiration for the engine stemmed from the 3.3-litre V12 powering the legendary Ferrari 250 GTO – small capacity, characterful and powerful. With a clear view on the required acceleration and torque, and the goal of a sub-1,000kg total vehicle weight, Cosworth proposed the capacity could be just 3.9-litres while still achieving supercar performance.

The highest-revving, most responsive naturally aspirated engine ever

The record for highest-revving engine was previously held by another of Gordon Murray’s creations – the 11,500rpm Light Car Company’s ‘Rocket’. This record will be beaten by the T.50 V12.

Beyond the record-setting and the totally-unique experience of driving a car that revs this high, the logic behind the 12,100rpm is to maximise driver engagement with, and appreciation of, the raw power available as revs increase.

The T.50 engine will deliver maximum power (663PS) at 11,500rpm. But driver enjoyment won’t kick in only at the far end of the rev range. This engine will also be the most responsive naturally aspirated road-car engine ever produced. Measured in revolutions gained per second, the T.50 will achieve mind-boggling responsiveness, picking up at 28,400 revs per second (the F1 engine’s equivalent is around 10,000 revs per second). To put the T.50 figure into context, this means that its V12 can rev from idle to its 12,100rpm redline in 0.3 of a second. Another figure that sets a new benchmark and is unlikely to ever be surpassed with a road car.

The most power-dense naturally aspirated engine ever

The T.50 engine produces the highest power density of any naturally aspirated road car engine ever made – 166PS-per-litre. This record, coupled with the lightness of the unit, places this engine right at the pinnacle of naturally-aspirated powertrain development.

The lightest road-going V12 ever

The T.50 V12 had to be light, to align with Murray’s ethos for the whole car. To achieve the lowest weight possible the block in the T.50 is made from a high-strength aluminium alloy, the crankshaft is made from steel and weighs only 13 kilograms, and the connecting rods and valves are made from titanium – as is the clutch housing. This all contributed to engine weight of just 178kg – yet another road-car record.

Murray: “Good design throughout kept engine weight low, while our refusal to cut corners in terms of quality, packaging, layout, and of course performance ensured we surpassed all of our goals.”

The best V12 sound ever

Delivering on a key element of the brief, the naturally-aspirated powerplant in the T.50 promises to be one of the best sounding road car engines ever made.

Part of the aural enjoyment will be created by the car’s screaming redline, but the team behind the T.50 have also found additional ways to ensure the sound of the engine delivers maximum driver enjoyment. The T.50 features Direct Path Induction Sound – a system pioneered on the McLaren F1 and refined on the T.50 to channel the sound of the raucous V12 into the cabin.

The cold-air ram induction intake sits immediately above the driver’s head, and is crafted – with varying thicknesses of carbon fibre in the roof that act as a loudspeaker – to amplify engine sound in the cabin. The beauty of the system is that it is actuated by throttle angle and not revs, this means the T.50 is quiet and refined on part throttle and grows louder as the driver pushes through half-throttle and beyond.

Murray: “You can never get a great sound from a turbocharged engine. The T.50 engine sound is going to be phenomenal. The intoxicating growl that drivers love is introduced as the throttle angle increases, the sound intensifies as the induction sound kicks in, then as you push towards the upper end of the rev range the V12 will sing like nothing else on the road.”

Just in Time for the Holidays – Bugatti Baby II Arrive...

Will rely on Franchitti’s racing experience to help with setting up of track events for T.50s customers
Read more
Feature Videos

Most advanced and effective aerodynamics ever seen on a road car.
Read more