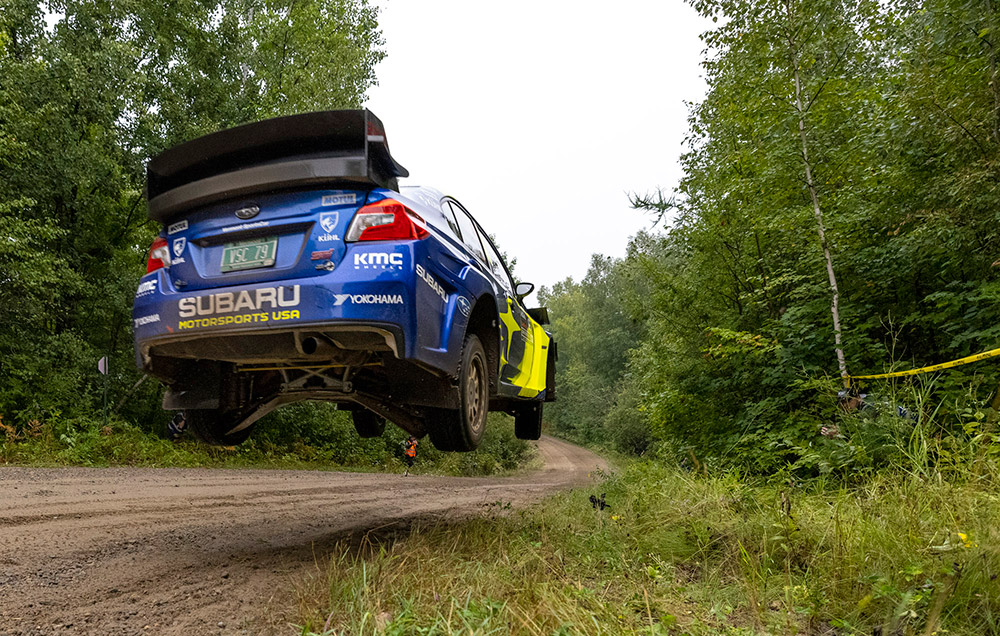 Subaru Motorsports USA driver Travis Pastrana and co-driver Rhianon Gelsomino won Minnesota’s Ojibwe Forests Rally, earning their fourth victory through six events of the 2021 American Rally Association (ARA) National Championship season and repeating their 2020 win at the Ojibwe event. Since teaming up for the first time at this rally last year, the crew of the #199 Subaru WRX STI have racked up five wins and eight podium finishes over nine events and have now earned enough points to provisionally secure the ARA overall driver’s and co-driver’s championships.

“It feels great, but it’s a relief!  The team did an amazing job getting our car back in one piece after our roll in New England last month. Rhi and I really went after it on Friday since those are statistically my best stages in the championship and managed to pick up a couple stage records in the process. Good battle with Ken on Saturday but we did what we had to do to bring it home!”

With 2020 ARA champion Barry McKenna of McKenna Motorsport sidelined due to other commitments and teammates Brandon Semenuk and John Hall retiring from the rally due to a roll in pre-event testing, Pastrana and Gelsomino found themselves in an ideal position to secure decisive championship points. However, longtime Pastrana rival Ken Block and Rhianon’s husband Alex Gelsomino had the opportunity to play spoiler in their #43 Hoonigan Racing Division WRX STI. Knowing that no less than a win on his favorite event would mathematically secure the title, Pastrana attacked on the first two stages, storming to a 20-second lead on SS1 and stretching it to nearly 40 seconds after SS2. The 2017 ARA champion left no doubt of his aggressive strategy or his raw pace on Friday’s sandy roads, winning the next six to complete a clean sweep of all eight of the first day’s stages.

Stormy conditions on Saturday threatened to put the result in doubt, as the rain left the stages dotted with slick and treacherous sections that produced a high level of attrition among the field. Running first on the slippery roads, Pastrana and Gelsomino adopted a more conservative strategy in the rain and ceded two stage wins to Block in the morning before winning back eight seconds of their lead on SS11. With nearly a minute in hand and only two full-length stages plus a pair of half-mile super specials remaining, the #199 crew navigated cautiously through the afternoon stages to bring home the victory by a margin of over 30 seconds.

Subaru Motorsports USA will be back in competition September 24-25 at Utah Motorsports Campus as the Nitro Rallycross series kicks off its five-round season. Pastrana and Gelsomino will return to the rally stages October 15-16 at Lake Superior Performance Rally in Michigan’s upper peninsula before wrapping up the ARA season at November’s Oregon Trail Rally.