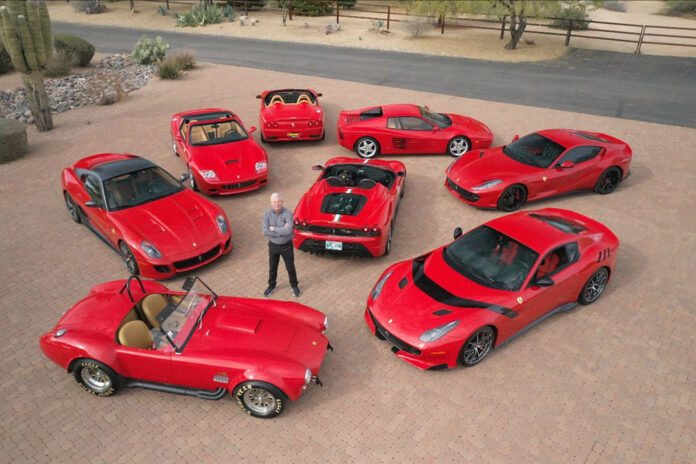 Mecum Auctions will host its third annual auction in Glendale, Arizona, at State Farm Stadium this March 18-20, and the anticipated 1,200-car lineup will be headlined by the awe-inspiring collection of Steve Todhunter, which comprises 20 vehicles ranging from seven pristine, low-mile Ferraris to a 1965 Shelby 427 Cobra FAM previously owned by late actor Paul Walker.

Not only is Todhunter a car collector, he is perhaps the quintessential example of such and a man with an eye for evolution. From the humble horsepower heavyweights of the golden era of muscle to the rarest of the Mopar machines and, ultimately, to Ferrari, Todhunter’s preference for powerful and impressive automobiles has followed a path of development focused on quality over quantity. Instead of continuously adding to and growing his collector car stables in numbers alone, Todhunter has poured his efforts into raising the bar in regards to the rarity and desirability of the collector cars within.

Not to be outdone on measures of rarity or exclusivity, the purpose-built 2006 Saleen S7 Twin Turbo (Lot S109) from Todhunter’s Glendale offering is one of just 14 produced, shows a mere 1,167 miles on its clock and stands as an absolute state-of-the-art American supercar. Other unique offerings from the Todhunter assemblage include the aforementioned 1965 Shelby 427 Cobra FAM (Lot S111.1), CSX1010, previously owned by Paul Walker, a 1969 Dodge Daytona (Lot S112), a pair of 1970 Ford Mustang Boss 429 Fastbacks, one wearing Grabber Blue (Lot S113) and one wearing Grabber Green (Lot S114), as well as a handful of modern, low-mileage muscle cars and a selection of Triumph and BSA-brand antique motorcycles.

Together, the selection that Steve Todhunter will bring to Glendale includes a wide range of vehicles that well demonstrate Todhunter’s metamorphic voyage as a collector of some of the world’s most celebrated and coveted automobiles.

Bidder registration for Mecum Glendale 2021 is available online in advance and on-site at the auction for $200, and it includes admission for two to all three auction days. For those unable to attend in person, enhanced remote bidding options are also available, with options for both online and telephone bidding. For more information on Mecum Glendale 2021 and all other scheduled 2021 auctions, visit Mecum.com. Mecum’s website is updated daily with the latest consignments and includes detailed descriptions and photographs of the vehicles to be offered. To view the list, to consign a vehicle or to register as a bidder for this and all Mecum events, visit Mecum.com, or call (262) 275-5050 for more information.