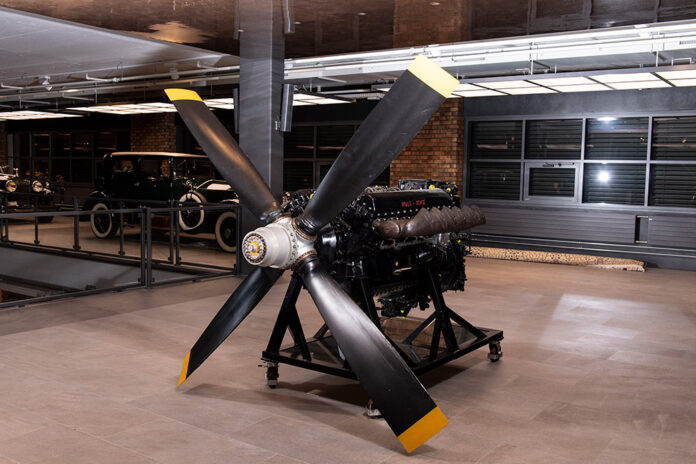 In the course of its long, rich history, Rolls-Royce has produced not only many finely engineered automobiles, but also numerous significant aero engines. Easily the most famous of these is the Merlin, a liquid-cooled V-12 initially developed in 1933 and introduced to production three years later. Well-timed, the engine eventually became one of the most successful of the Second World War, with variants powering such legendary aircraft as the Hawker Hurricane, Supermarine Spitfire, and Avro Lancaster. Some 150,000 Merlins were produced, and the beautiful detailing of their design, as well as their impressive reliability and durability, have ensured that they continue to be desirable both as powerplants and as garage showpieces.

The engine offered here is a Mk.113A model, dating from 1946, as was fitted to de Havilland Mosquito Mk. 32 high-altitude photo reconnaissance, Mk. 35 long-range fighter/bomber, and Mk. 36 night fighter aircraft. It was sold in 1994 by a British seller to the noted American Rolls-Royce specialist and restorer, the late Frank Cooke, and was noted at the time to be in good cosmetic condition and largely complete save for exhaust. The head was exchanged from another engine at some point and the camshaft was noted to have wear at one end. Thus, the engine was set up for display purposes, having been equipped with a propeller, exhaust system, ignition equipment, and other hardware to complete its presentation for the current collection.

A Merlin is the ideal companion to vintage Rolls-Royce motorcars, as a fitting demonstration that the company’s superb workmanship reached from the land to the air.