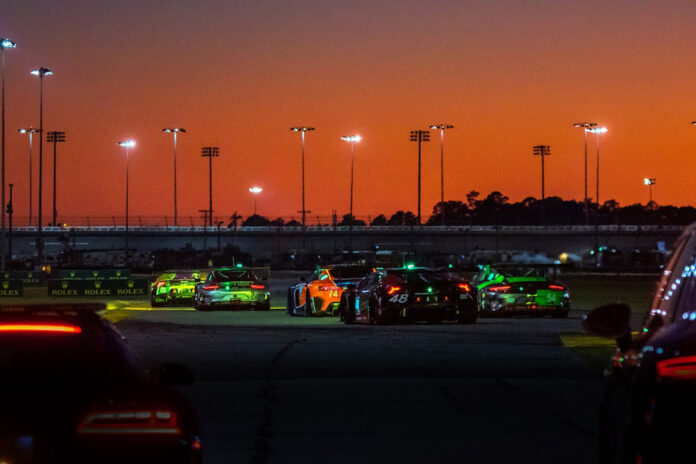 The 2021 Rolex 24 At DAYTONA will take place this weekend, from Saturday 30 to Sunday 31 January, at the revered Daytona International Speedway®. Rolex’s association with Daytona – the “birthplace of speed” – dates back almost a century to the 1930s, when motoring legend Sir Malcolm Campbell chose to wear a Rolex Oyster during his World Land Speed Record breaking feats.

First staged in 1962, the Rolex 24 At DAYTONA continues to push the boundaries of motor sport competition and has become synonymous with the height of endurance racing. This year, Rolex celebrates its 30th edition as Title Sponsor of this prestigious North American contest, having supported the race since its early days. Rolex Testimonee and three-time FIA Formula 1® Drivers’ World Champion Sir Jackie Stewart says:

“Few sports have ever been blessed with enduring relationships such as that of Rolex and motor racing. Rolex has always been a company that thinks long-term and fostered remarkable partnerships, and as such, has been part of tremendous moments in history. It is always with great excitement that the start of the motor sport season arrives with the Rolex 24, where attention to detail and the very highest standards of performance are fundamental to achieve success.”

An updated schedule for 2021 saw the Roar Before The Rolex 24 take place from Friday 22 to Sunday 24 January, providing drivers with an opportunity to familiarize themselves with the challenging 5.73-km (3.56-mile) circuit. For the first time, the preview event hosted qualifying for the Rolex 24 At DAYTONA, by way of a 100-minute race on Sunday featuring all five categories. In rain-affected conditions, the No. 31 Whelen Engineering Cadillac DPi V.R, driven by Felipe Nasr and Pipo Derani, clinched victory by 3.664 seconds and claimed the inaugural Motul Pole Award 100. The No. 31 will lead the 49-car field past the green flag on Saturday 30 January at 15:40 local time, marking the start of this year’s Rolex 24 At DAYTONA.

As has now become tradition, leading racing drivers from different motor sport disciplines took part in the Roar and are now preparing to take on the 2021 Rolex 24 At DAYTONA. Joining the Brazilian duo of Nasr and Derani in the No. 31 are 2019–2020 FIA World Endurance Champion Mike Conway and reigning NASCAR Cup Series champion Chase Elliott. They will be challenged for overall victory by the No. 48 Ally Cadillac DPi V.R, driven by NASCAR legend Jimmie Johnson, 2019 Indianapolis 500 winner Simon Pagenaud, and endurance racing specialists Kamui Kobayashi and Mike Rockenfeller. After a one-year absence from the IMSA WeatherTech SportsCar Championship, Chip Ganassi Racing also fields an exciting driver line-up in the Daytona Prototype international (DPi) class, comprising defending race winners Renger van der Zande and Scott Dixon, together with recent Formula 1® driver Kevin Magnussen. These experienced racers will combine their vast knowledge and expertise in pursuit of the ultimate, race-winning performance.

Success at the Rolex 24 At DAYTONA demands absolute precision; each team must find the perfect balance between speed and machine reliability. It requires astute skill and focus, combined with a clear race strategy, to ensure the car survives the intense twice-around-the-clock contest. The drivers who complete the greatest number of laps in the 24-hour period are presented with a specially engraved Rolex Oyster Perpetual Cosmograph Daytona in recognition of their achievements. Sir Jackie Stewart reflects on the prestige bestowed upon winning drivers when they receive one of the most sought-after trophies in motor sport:

“The Daytona is one of the most legendary Rolex timepieces – it is the ultimate racing driver’s watch, closely associated with speed and endurance. The watch is inextricably linked with this iconic race, making it the greatest and most fitting honour for those who have the privilege of visiting Victory Lane.”