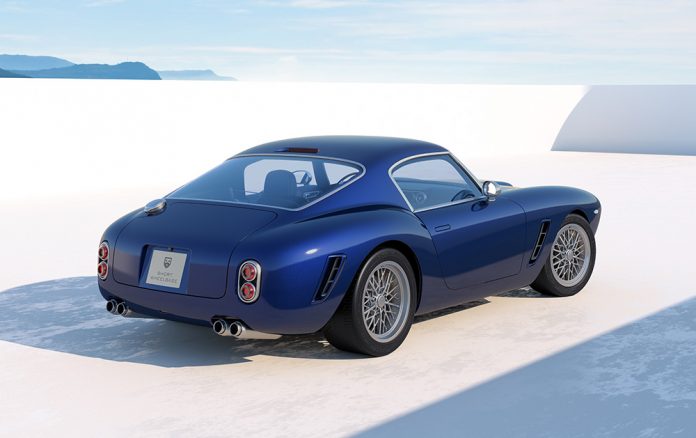 At the heart of RML’s new Short Wheelbase, which will make its first appearance this later this year, is one of the all-time great high-performance engines: the 5474cc, naturally aspirated, 65-degree Ferrari V12. Producing 485PS at 7,000rpm and 568Nm of torque at 5,000rpm, the unit is an engineering masterpiece, and one that will power the car from 0-60mph in 4.1 seconds and to over 185mph*.

However, integration of the powertrain called upon all of RML’s vast experience developing performance powertrains from scratch for OEMs. Adnan Rahman, Powertrain Engineer for the Short Wheelbase programme summed up some of the challenges.

“It was important for us to look at the V12’s application in the 550 model so that we could benchmark its intake and cooling characteristics accurately. We then worked closely with the car’s head of design, Jonathan Bowen, to make sure that ducting air into the engine not only met our requirements, but also didn’t make any aesthetic compromises.

“The difference in dimensions between the 550 (the platform from which underpins RML’s car) and the Short Wheelbase also meant that inlet, cooling and exhaust systems had to be designed from scratch so they would integrate with a more compact body, but still perform effectively in even more demanding driving environments. Imagine, for example, making full use of the car’s performance and then hitting a traffic jam in downtown Dubai in 50-degree heat – well, that’s what it’s designed to cope with.”

Adnan’s colleague, Matt Packham, was tasked with developing the Short Wheelbase’s oil and cooling systems, which again are bespoke. “The design and layout of the radiators and cooling system were a priority from the start, since where they sit in the engine bay determines how most other components are positioned. We started by seeing how effective the 550’s cooling pack was by testing it in a climatic wind tunnel chamber, and with that data, developed our own cooling test rig specifically for the Short Wheelbase.”

Matt’s team then re-designed the five radiators for the new application (water and engine oil radiators, gearbox and PAS coolers, and an HVAC condenser), as well as the oil tank for the engine’s dry-sump system, which could no longer be accommodated at the front of the engine bay and had to be relocated at the side of the engine. “We also wanted the under-bonnet area to have a more cohesive design,” said Matt. “So components like the oil tank and washer reservoir are positioned symmetrically and each has a neat carbon cover.”

Of course, a classic engine like the Ferrari V12 should not only be seen, but heard in all its glory, and the RML team had to develop an all-new exhaust system from the manifold to its quad tail-pipes (apart from the catalyst) to achieve this. Acoustically sonorous, but meeting all current noise regulations, the system also had to be free-flowing enough not to impede the engine’s original performance.

And that performance will be consistent from car to car, thanks to RML’s Powertrain Assurance Programme. Each V12 unit is first dynamometer-tested to establish its power credentials. It is then stripped and follows a strict measurement process to gauge cylinder bore wear and to check that all internal components fall within the manufacturer’s original scope of tolerance. Only when the unit is brought back to its original specification does it go through a final validation on the dyno before being installed in the Short Wheelbase.

But while RML’s new classic GT is bespoke in almost every way, use of OEM service parts mean that it can be maintained by any reputable specialist around the world, which given that around 70 per cent of cars will be exported, will be important to buyers. For those, though, who would rather have a more personal touch, RML offers its own ‘flying spanner’ service, where its technicians will carry out maintenance as required wherever the car is situated.