Porsche puts its faith in the brand-new 911 RSR (2019 model year) to defend the FIA World Endurance Championship (WEC) title. The race car complying with the FIA GTE regulations is a completely new development. The vehicle from Weissach has undergone i … 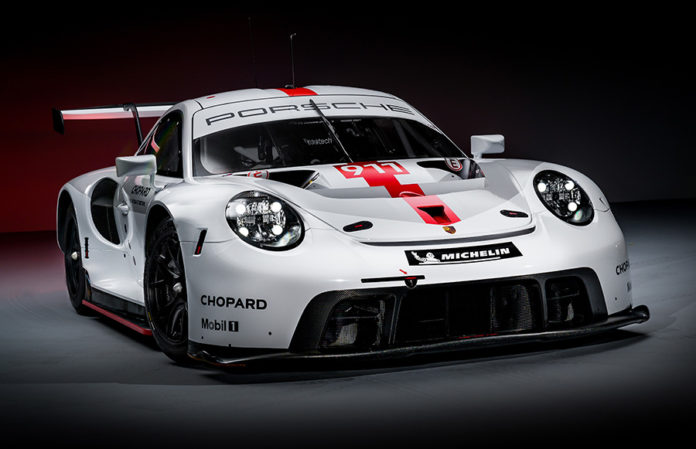 Porsche puts its faith in the brand-new 911 RSR (2019 model year) to defend the FIA World Endurance Championship (WEC) title. The race car complying with the FIA GTE regulations is a completely new development. 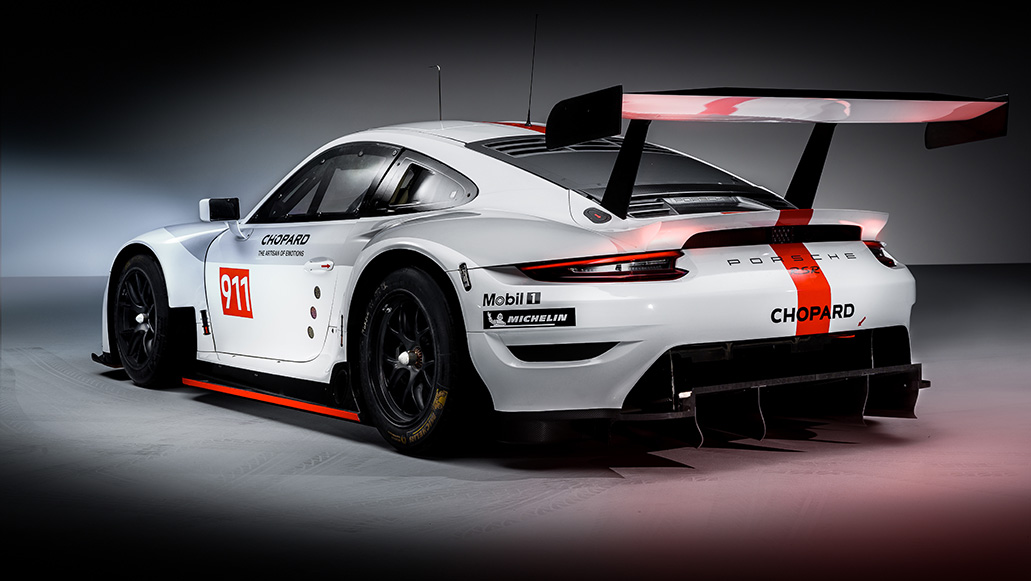 The vehicle from Weissach has undergone improvements in all areas and will replace the successful 911 RSR with which Porsche won the manufacturers’ and drivers’ world championship in the FIA WEC as well as the Le Mans endurance classic (France) and the IMSA races at Sebring and Road Atlanta (Petit Le Mans) amongst other events in 2019. 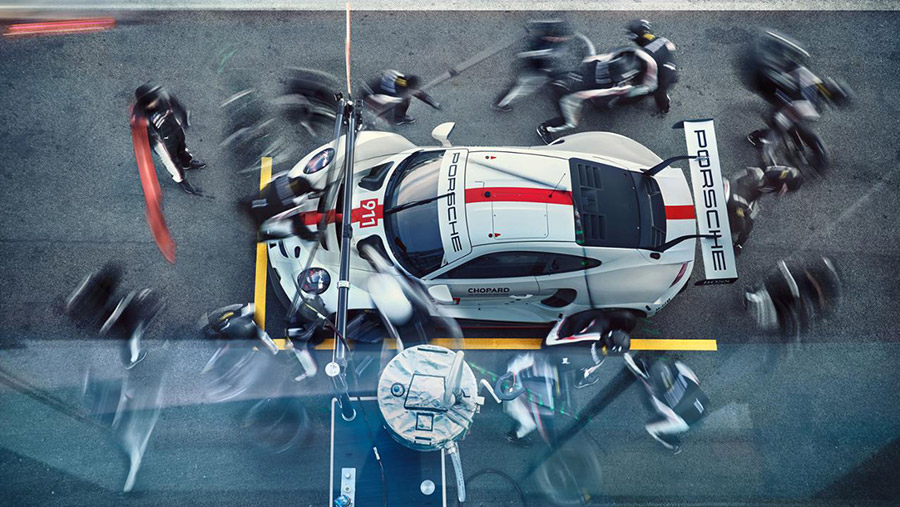 In developing the new Porsche 911 RSR, substantial insights were garnered and adopted from the extremely successful race outings of its predecessor. “Since 2017 the 911 RSR has yielded us more than 20 class wins in the world championship as well as at long-distance series in North America and Europe. Our job in the development was to make a very good car even better. The engineers at Weissach have perfectly implemented this in every aspect,” says Fritz Enzinger, Vice President Porsche Motorsport. 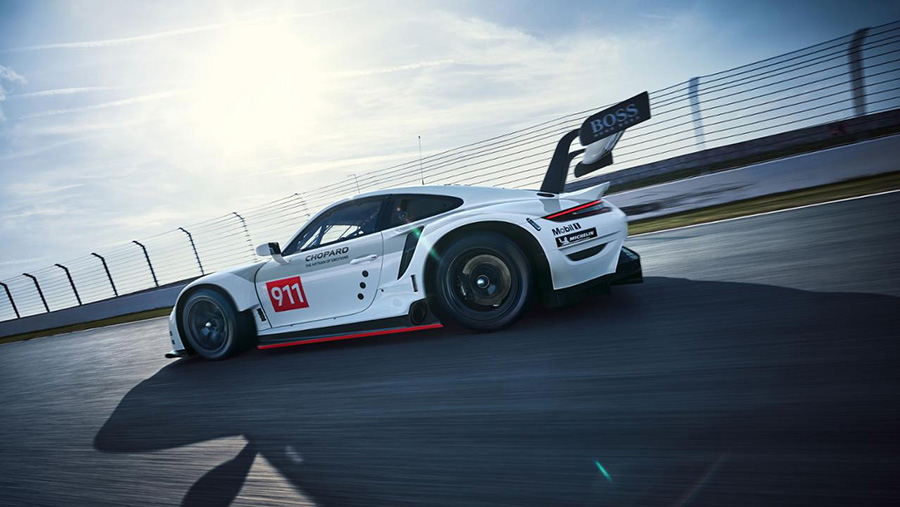 “We never rest on our laurels,” explains Pascal Zurlinden, Director GT Factory Motorsport. “We’ve extensively analysed all factory and customer campaigns with the Porsche 911 RSR. Our engineers noticed room for improvement in a number of areas. We have made significant progress in the development of our car for the next three-year homologation period, especially in the complex areas of driveability, efficiency, durability and serviceability. Ninety-five percent of the car is new. The only components that we’ve kept unchanged from the predecessor are the headlights, brake system, clutch, driver’s seat and parts of the suspension. Tests so far have run excellently. We’re already looking forward to the first races of the 2019/2020 FIA WEC season.” 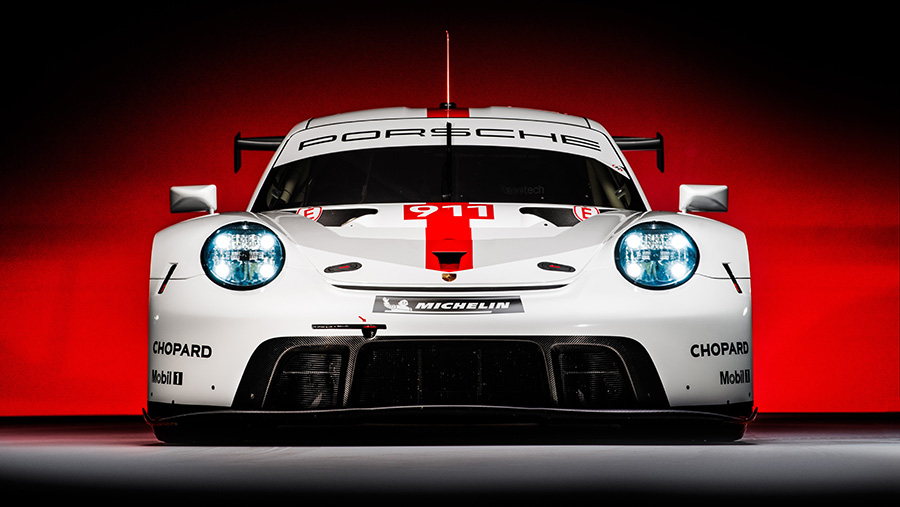 In terms of the drivetrain, Porsche remains faithful to its chosen path. The latest nine-eleven is also powered by a six-cylinder naturally aspirated engine. The highly efficient boxer unit positioned in front of the rear axle has a capacity of 4,194 cc and – depending on the size of the restrictor – produces around 515 hp. The new power unit is the largest ever boxer engine to be mounted in a Porsche 911 ex-works, and offers even better driveability over a wider rev-band compared to the predecessor’s proven four-litre aggregate. Power is delivered to the rear wheels via a weight-optimised, more rigid sequential six-speed constant-mesh gearbox. The new powertrain in the Porsche 911 RSR ensures faster gear-shift times and increased efficiency. The two exhaust pipes now exit on each side in front of the rear wheels. The new exhaust gas ducting saves weight and is aerodynamically advantageous. 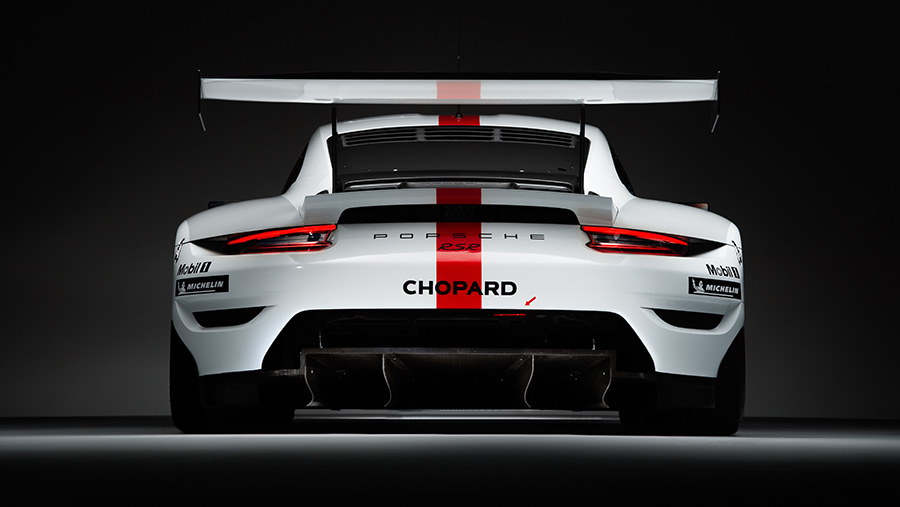 With the repositioning of the tailpipes, space has been made for an optimised diffuser. The distinctive component at the rear of the Porsche 911 RSR now generates even more downforce. Thanks to the optimisation of airflow at the front and the sides of the Weissach racer, aerodynamic efficiency and stability have increased significantly, thereby further improving the use and durability of the tyres during racing. 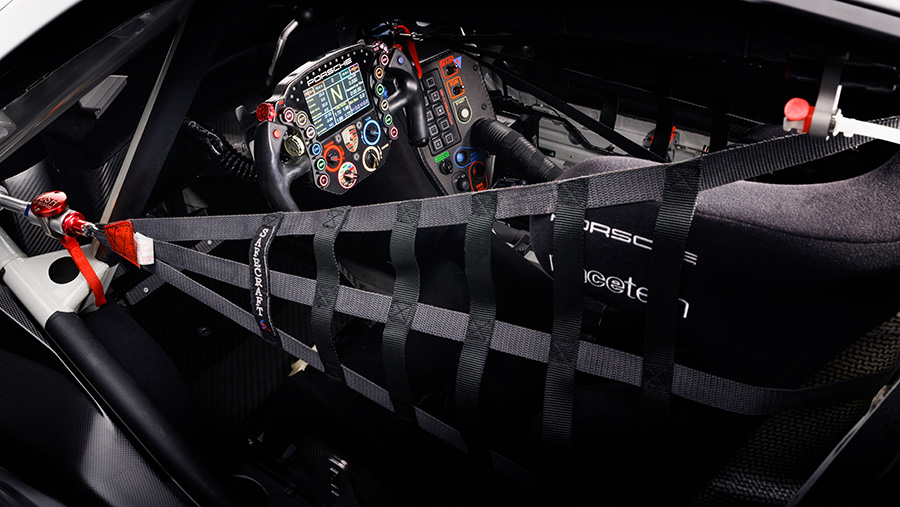 Focus on the work of drivers and mechanics

Driveability and serviceability are critical factors in long-distance racing. For this reason, Porsche placed particular emphasis on these aspects when developing the new 911 RSR. The cockpit has been reworked with the focus on better usability. In this regard, extensive feedback from the Porsche drivers proved invaluable. Like with the predecessor, the body made of carbon-fibre reinforced plastic can be swapped out quickly and thus ensures efficient pit processes in long-distance racing. 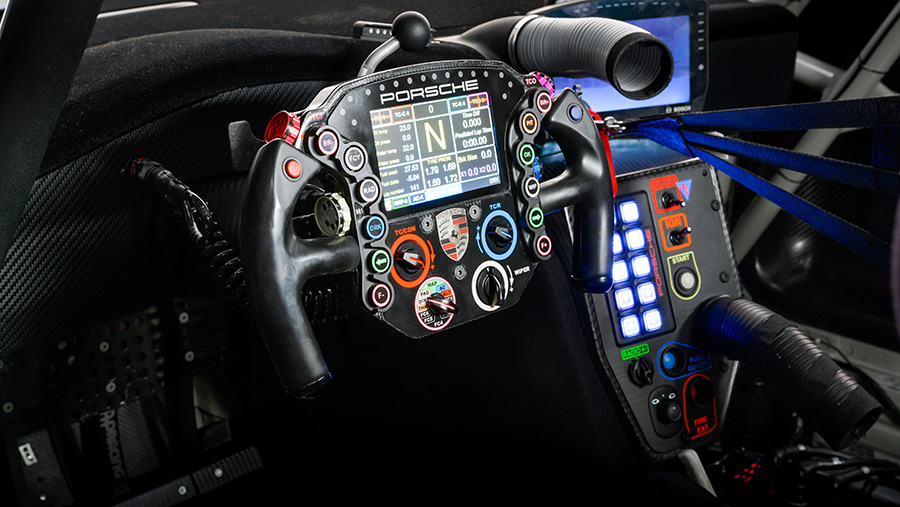 To give drivers added protection, the active and passive safety elements in the Porsche 911 RSR have been overhauled. The proven collision warning system allows drivers an even better overview to detect approaching prototype vehicles early enough. The optimised roll cage, the FIA side impact panel in the door and cage as well as additional impact protection for the legs improve the passive safety in the event of an accident. Other features include the removable roof hatch and the rigidly-mounted racing seat featuring a six-point safety harness for the driver. 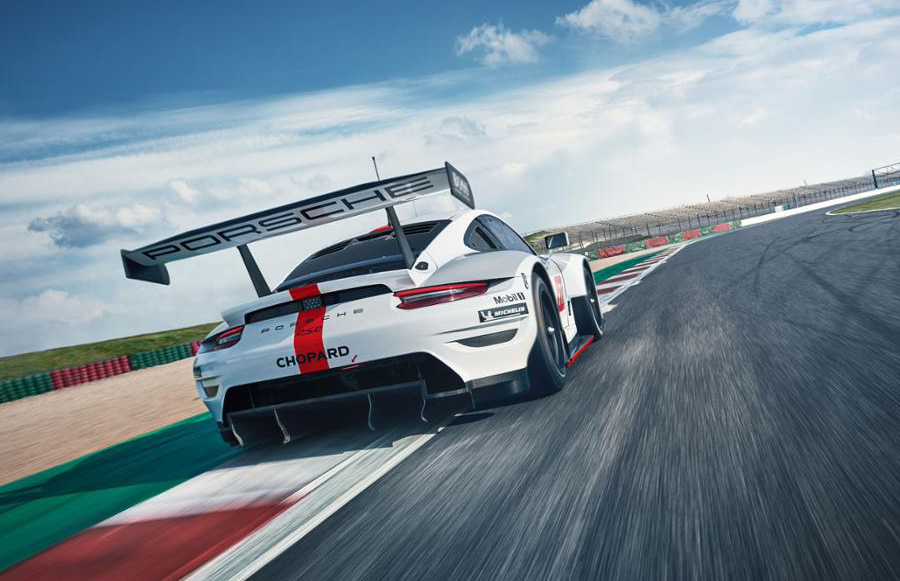 The most spectacular 911 of all time makes its world premiere on 6 July at the Goodwood Festival of Speed (Great Britain). The Porsche 911 RSR will also celebrate its race debut on the British Isles – at the season-opening round of the FIA World Endurance Championship (WEC) at Silverstone on 1 September. Prior to this, the vehicle of the current manufacturers’ world champions will face rival manufacturers contesting the FIA WEC GTE-Pro class for the first time at a two-day prologue in Barcelona (Spain) on 23/24 July. The Porsche GT Team will field two works cars at eight rounds of the 2019/2020 season with drivers Michael Christensen (Denmark) and Kévin Estre (France) as well as Gianmaria Bruni (Italy) and Richard Lietz (Austria). In the IMSA WeatherTech SportsCar Championship, the switch to the latest model will take place in the 2020 season. In North America, an additional two factory-run Porsche 911 RSR will fight for the GTLM category title against competing manufacturers. For customer teams, the vehicle will be available from the 2020/2021 FIA WEC season. 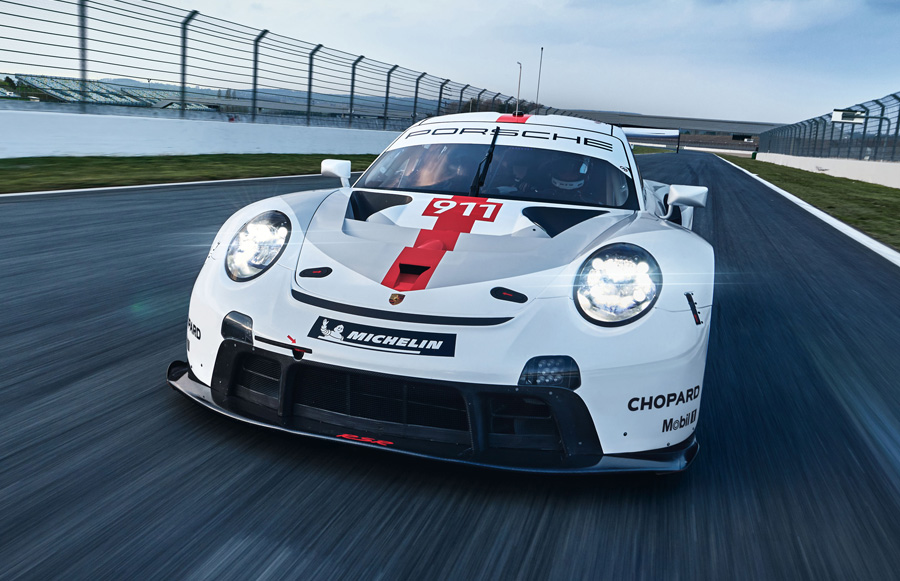 For the first time, the factory race cars from Weissach will be decked out in two different designs: The typical Porsche white will continue to be the dominating colour on the No. 91 car. Added accents include a centrally-placed red stripe extending from the front hood over the roof to the rear apron, as well as red side sills. Grey highlights on the side complement the clear and dynamic design. On the No. 92 car, the white and grey colours are reversed. The rear wing and the wing mirrors are black instead of white so that fans can differentiate between the two.

A Look Into The Development Of The New Porsche 911 RSR