As the 50th Anniversary of the International Motor Sports Association (IMSA) comes to a close at Michelin Raceway Road Atlanta, Porsche Cars North America (PCNA) will turn to an Atlanta neighbor to help celebrate and commemorate the sports car racing s … 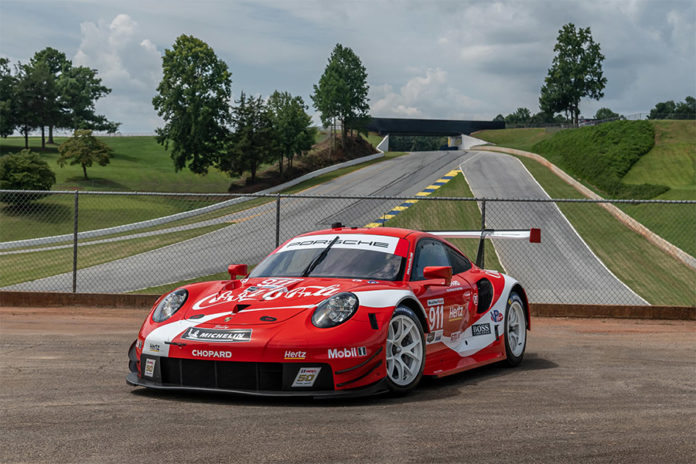 As the 50th Anniversary of the International Motor Sports Association (IMSA) comes to a close at Michelin Raceway Road Atlanta, Porsche Cars North America (PCNA) will turn to an Atlanta neighbor to help celebrate and commemorate the sports car racing series’ Golden Anniversary. The twin Porsche GT Team Porsche 911 RSR race cars will carry a familiar red and white livery in the 22nd Running of the Motul Petit Le Mans that will immediately invoke fond memories of IMSA’s first heyday of the 1980s. The annual 10-hour endurance classic at the Braselton, Georgia-area race track – held October 9 – 12 – will see the “works” Porsche race cars wear the hometown jersey… Coke Is It! 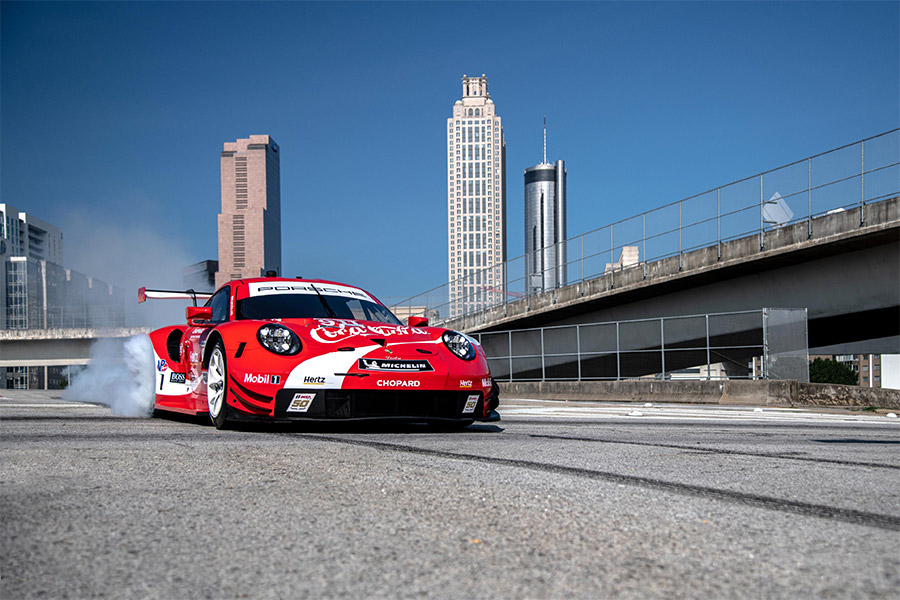 Bob Akin Motor Racing-prepared Porsche race cars carried Coca-Cola themed liveries for seven years and the timeless connection of these iconic brands lives and breathes again as North America’s premier sports car racing series closes its fifth-decade of competition. Following the German brand’s tradition of honoring its successful programs of the past, the livery for the factory Porsche 911 RSR GTLM class entries at this year’s IMSA finale centers on the legendary Coca-Cola 962 that took the Akin-led team to its most famous win at Sebring in 1986. Wearing the Coke “wave”, also known as the “Dynamic Ribbon”, on the hood, flanks and rear bumper, the two factory entries will look identical with the exception of their number plate and windshield banner.

The Porsche GT Team Porsche 911 RSR shared by 2015 overall Petit Le Mans winners Patrick Pilet (France) and Nick Tandy (Great Britain) as well Frédéric Makowiecki (France) will carry a white windshield banner on the No. 911. The No. 912 of Earl Bamber (New Zealand), Laurens Vanthoor (Belgium) and Mathieu Jaminet (France) will have the black banner on their windshield. Each car will have the familiar and era appropriate “Coca-Cola” on the hood and “Coke Is It!” on the rear quarter panel. Like the popular 962 of the time, both cars will feature white BBS wheels. 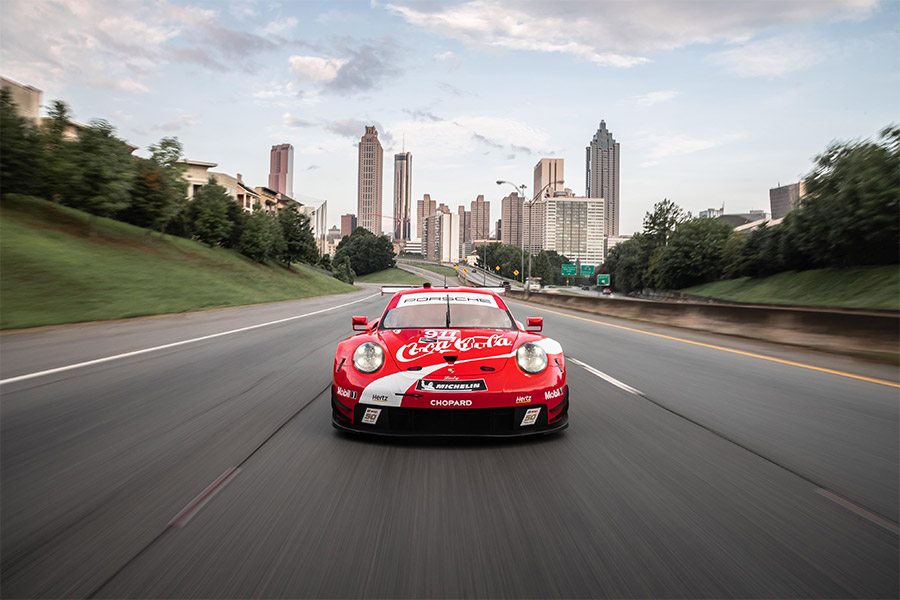 Few brands are more recognizable than Coca-Cola and Porsche. Internationally acknowledged as leaders in their respective industries, each company enjoys an unparalleled visual and cultural identity. With PCNA headquartered in Atlanta, and Coca-Cola’s entire corporate history spent in the Georgia capital, it is a natural fit for the pair to come together again on the 2.54-mile race course outside of Georgia’s capital city.

The similarities of the two hallmark companies do not begin or end in Atlanta. Each enjoys a shape so uniquely tied to its brand they are internationally trademarked and instantly recognizable. The silhouette of the 911 has carried true since 1963. Its dimensions may have changed, but there is no mistaking the profile of the German brand’s most famous sports car. Coca-Cola’s “contour” bottle enjoys the same immediately identifiable traits as the Porsche. Designed and developed in 1916, the Coke bottle shape remains forever linked to the soft drink powerhouse. Today, both flowing shapes are visual and tactile representations of their companies. 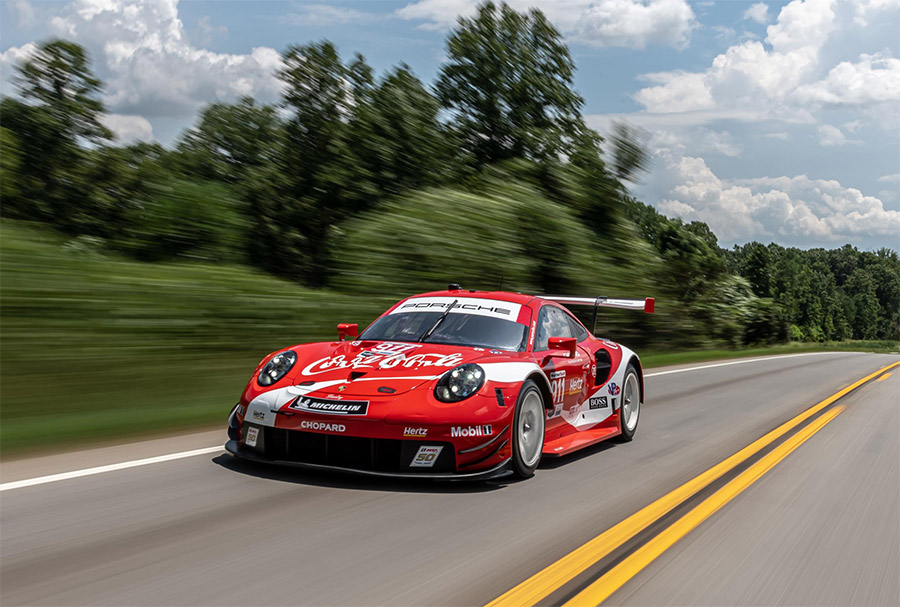 Michelin Raceway Road Atlanta opened in 1970 in part due to the financing of Arthur Montgomery, Jr., then president of the Atlanta Coca-Cola Bottling Company. Always a “Coke track”, the recently replaced tower and media center facility carried the familiar Coca-Cola branding high on its sides for decades. Porsche moved its North American headquarters to the Peach State in 1998 and opened its Experience Center adjacent to Hartsfield-Jackson International Airport in 2015. Coca-Cola began in 1886 and has grown from a small soda fountain in downtown Atlanta to one of the world’s most recognizable brands in the ensuing 133 years.

Pedro Mota, Vice President of Marketing for Porsche Cars North America. “Last fall, we kicked off the IMSA 50th Anniversary celebration with the fan-favorite Mobil 1 livery at Petit Le Mans. We began the 2019 season by highlighting still another longstanding and successful relationship with the famous red, white and blue ‘sweeps’ of Brumos Racing and Hurley Haywood. Now, as one last tribute to honor IMSA on their Golden Anniversary, we are bringing back yet another memorable livery… a local favorite: Coca-Cola. As an added benefit, we get to fondly recall Bob Akin, the gentleman who first brought Coca-Cola and Porsche together with the customer 935 and 962 race cars he successfully campaigned.” 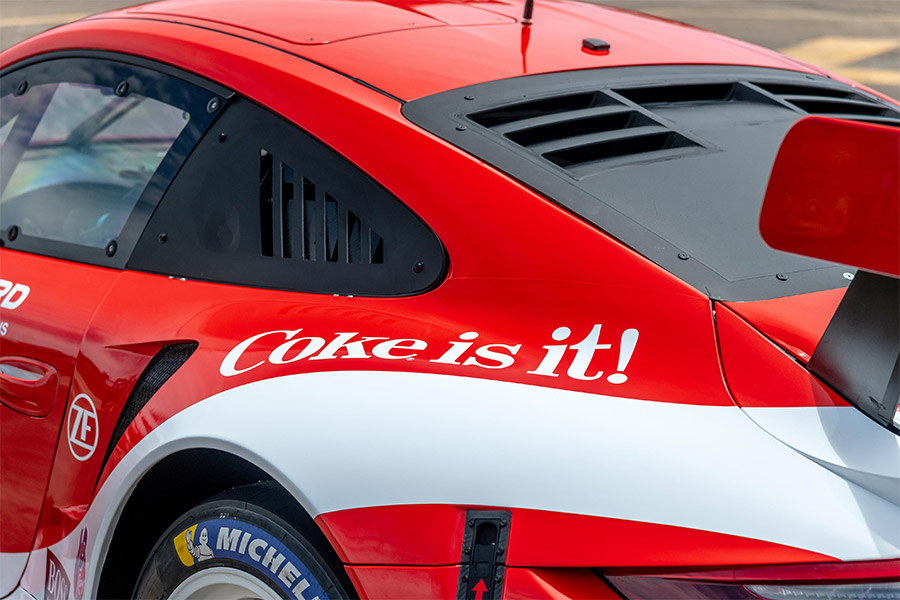 Jim France, NASCAR Chairman/ IMSA Chairman. “I can’t think of a better way for fans to celebrate the final race of IMSA’s 50th Anniversary season by seeing two of the most iconic brands in the world – Porsche and Coca-Cola – bring back an unforgettable livery. Bob Akin was one of a kind, much like Porsche and Coca-Cola, and to see this livery at Michelin Raceway Road Atlanta for this year’s Motul Petit Le Mans will certainly be exciting for everyone.”