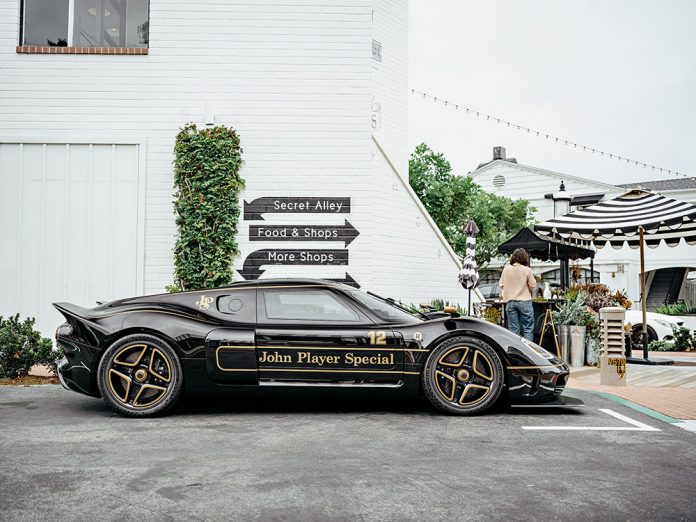 Radford has today unveiled its Type 62-2 sportscar in an iconic and distinctive John Player Special (JPS) specification. The Lotus Type 62-2 coachbuilt by Radford (The Type 62-2), is limited to just 62 examples worldwide, with each model built precisely to its individual owner’s desired specification. Of those 62 cars, only 12 will be JPS liveried cars, and Radford is now taking build slot applications for this ultra-exclusive model.

The JPS car will make its first official public debut next week at Goodwood Revival. It is the most extreme version of the world’s first modern Radford – and the third and final version of the car to be announced. It sits alongside the ‘Classic’ version, providing subtle design cues to the original Type 62 Lotus car, and a ‘Gold Leaf’ version, which pays homage to the race car’s iconic Gold Leaf livery.

The JPS Type 62-2 wears a modern twist on the iconic John Player Special livery, which is one of the most famous and significant racing car liveries ever to grace a Formula 1 car. Its legendary black and gold colour scheme is most instantly recognisable from the bodywork of the Lotus Type 72D which Emerson Fittipaldi raced to five victories and championship victory during the 1972 Formula 1 season. The livery was present on Lotus Formula 1 cars until 1986 and the Lotus 98T driven by the legendary Ayrton Senna – it epitomised the glamour era of motor racing in the 1970s.

“The Radford Type 62-2 in John Player Special guise, is a very unique proposition. From a design perspective, the JPS car really stands out as being more extreme than its Classic and Gold Leaf siblings, with larger diffusers, air intakes and wheels. Sporting what is certainly the most iconic racing livery ever to grace a Formula 1 car, gives the car a real presence and sense of occasion. Only 12 of these very special cars will be made, making it a very rare car indeed.” – Mark Stubbs

The JPS Type 62-2 offers owners several key enhancements over the Classic and Gold Leaf cars. The JPS is lighter, faster and more focussed than the Gold Leaf car – and is closer to a race car than a road car. It produces an intoxicating 600bhp from a 3.5-litre supercharged V6 engine. This is possible thanks to upgraded pistons, con-rods, camshafts, calibration and a larger, upgraded supercharger.

Jenson Button “The John Player special Type 62-2 is the most extreme Type 62-2 that money can buy. It is low, sleek and powerful and sports one of the most iconic racing liveries ever created – one of the liveries that the heroes of Formula 1 such as Emerson Fittipaldi and Ayrton Senna used to race with, in the cars that made me want to be a driver

“The JPS Type 62-2 is even more dynamically focussed and extremely capable on both road and track – it’s very light, very fast and nimble – a proper assault on the senses that will hold its own among even the most accomplished track cars. Naturally, it is also embellished with all of the high-end touches of a bespoke coachbuilder such as Radford.”

Also upgraded from the Gold Leaf car are the brakes, the JPS car comes with AP Monobloc calipers and fully carbon ceramic brake rotors, which are 360mm in diameter. These are housed within larger 18-inch front and 19-inch Dymag carbon composite wheels – which lower the unsprung mass, and improve the nimble handling characteristics of the car, yet further. The composite wheels are shod in Michelin Pilot Sport Cup 2 tyres.

The design of the JPS is another area where the car differentiates itself from the rest of the range. In every area of the bodywork the car is more extreme than its Classic and Gold Leaf stablemates. At the front of the car, the splitter is more pronounced, providing a race car stance. At the side of the car, the air intakes are larger to cool the more powerful combustion engine, while at the rear, the diffuser is again more extreme than the Classic and Gold Leaf cars, extending further out for increased aerodynamic downforce.

The paintwork on the JPS cars is another area worthy of mention. An exquisitely conceptualised and constructed finish has resulted from many hours of formulation and research. The result on this show car is a beautiful layer of bespoke gold paint which playfully glints through the 10 layers of rich, dark Candy Black. In certain lights and at certain angles, the paint provides a subtle nod to the original JPS colour scheme, but with a modern and exciting twist. The show car wears a gold pinstripe meticulously hand-painted underneath the clearcoat on owner cars.

Radford is inspired by the legendary British coachbuilding company of the same name, which once built cars for a celebrity clientele that included all four of The Beatles. The global company with British heart and soul is co-owned by leading designer Mark Stubbs, broadcaster and motoring specialist Ant Anstead, former FIA Formula OneTM World Champion, Jenson Button and acclaimed business adviser and lawyer Roger Behle.

Radford’s first model of the modern era is built in a partnership with Lotus. While the mid-engine two-seater coupé takes inspiration from the revered 1960’s Lotus Type 62, it utilises the Hethel marque’s latest technologies to deliver the purest possible driving experience. The Radford Type 62-2 is engineered for unadulterated mechanical feel, exceptional engagement and uncompromising poise.

The is the first time the elegant lines of this ultra-exclusive JPS version of the Type 62-2 exterior have been shown; the luxurious interior will be revealed at a future date. The car’s design has been led by preeminent automotive designer Mark Stubbs who has taken the project from a sketch to the production-ready car revealed today. Stubbs’ design for the Type 62-2 evokes the spirit of Lotus and the original Type 62 as a homage to the marque’s illustrious motorsport history. With support from Radford’s engineers, former FIA Formula OneTM World Champion Jenson Button has fine-honed the dynamic response of the JPS Type 62-2 to ensure the most focussed Type 62-2 driving experience.