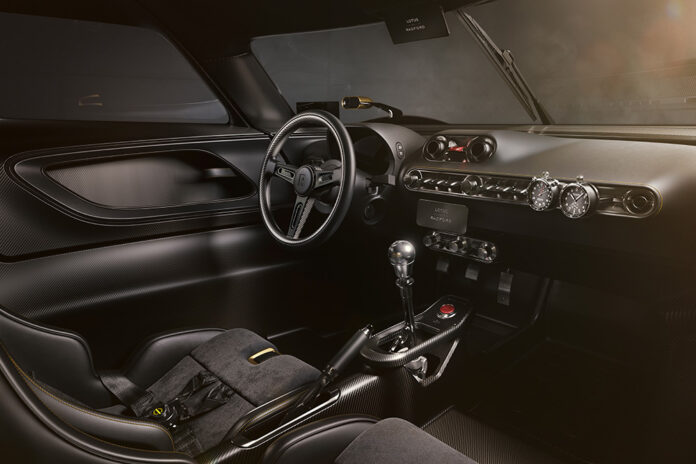 Fulfilling the promise that every Radford will be bespoke built to precise customisation requirements from clients, it has partnered with world-renowned makers of British mechanical timepieces, Bremont Watch Company, to integrate exquisite analogue dials within the dashboard.

The completely bespoke interior pays homage to the essence of Lotus’s lightweighting philosophy. It features blacked-out window tinting with carbon fibre accents throughout, including a-pillars, headliner and floor lining, capturing the light, agile essence of its sportscar underpinning. The centrepiece of the cabin is a pair of beautiful Bremont dials, a clock and a stopwatch.

Mark Stubbs, Radford Design Director “I always ask myself, what would Harold have done? Radford embraces and amplifies what the original manufacturer would do. We build upon it. With this interior, we still want it to be a Lotus Type 62-2, but with expert craftsmanship and using the finest materials available that don’t take anything away from a lightweight sportscar driving experience. This interior expertly finds the fine line between luxury bespoke and high-quality craftsmanship but whilst still conveying the essence of an out and out sportscar.

“We’ve got the same milled and turned finish from the body of the clocks in our switches, so we’ve really integrated them and embraced what Bremont has crafted into this design. The analogue displays are a beautiful homage to the era of the Type 62-2 and its heritage. We want the driver to feel 100% focused on the joy of driving.”

Nick English, Co-Founder of Bremont: “We’re thrilled to have been asked to create a beautiful mechanical rally timer featuring a stopwatch and clock for the interior of this car, all exquisitely engineered in Britain, just like the Radford Lotus Type 62-2 itself. Radford is reviving the art of coachbuilding and Bremont has been proudly spearheading the revival of British watchmaking for nearly 20 years, there is a lovely synergy between both businesses in terms of celebrating the best of British manufacturing and design.”

The interior design features a beautiful sweeping line that tracks all the way around the interior of the car, from the back of the driver’s shoulders through and around the screen display. This key element can be customised in any kind of finish desired, from precious metals through to carbon fibre, as shown on the interior reveal car.

The door opening is a design element from the original Lotus Type 62, with a high sill and cut out roof. Once inside, the closeness of the glass gives the driver the feel of being in the cockpit of a Le Mans prototype.

Mark Stubbs “Everything is driver centric and built around that. It’s all about experiences, and the feeling the driver gets when getting in and out of the car is really important. You step into the car and slide into the interior, where the seat grips you and urges you to drive.”

For the purists, Radford has designed a fully exposed gear linkage for the manual transmission, an embracing homage to the ‘last of the manual’ era of motor cars. The start-stop button on the console is housed in a design that echoes the double ducktail exterior; a small visual queue to the spectacular iconic body shape. The interior also reflects elements of the JPS livery, with a perfectly balanced 2.5% blacked out cabin and subtle accents of gold.

Keeping to the philosophy of a lightweight, driver-oriented sportscar, the UI screen is subtle and all the in-car controls are physical toggles and switches, crafted with the finest materials.

The digital screen has a user interface that is designed bespoke for the Type 62-2 and has customisable elements for each client. There are three smaller screens inside the cockpit, ​​one which flanks each side and one in the centre. These are the side view and rear camera displays, with external cameras built into the very small wing “mirrors” and at the rear of the car, as there’s no rear glass. The cameras give the driver the visual confidence of the view around them.

Another element of technology in the interior is hidden behind the build plaque, which will designate the build number of the strictly-limited 62 examples. It is sculpted from a floating, glass fronted mounting piece, behind which is a magnetised mobile phone dock and wireless sheet charger. Drivers can connect via Bluetooth for navigation and audio – and specify their preferred position for the plaque, or request it to be deleted entirely for a completely uninterrupted driving experience.

Radford will create contemporary luxury commissions true to classic timeless designs, bringing a modern and relevant version of coachbuilding, to a new discerning clientele.  Potential buyers are invited to visit the Radford website to register their interest.

Originally founded in 1948 by Harold Radford, creator of bespoke vehicles for sixties icons including The Beatles, the Radford name has been revived as a coachbuilder for the 21st century by leading British car designer Mark Stubbs, TV presenter and Mechanical Engineer Ant Anstead, Business expert Roger Behle, and former Formula OneTM  World Champion, Jenson Button. Dan Burge has been recently appointed as CEO.