The Type 62-2 was voted for by the public at the event and across the world. 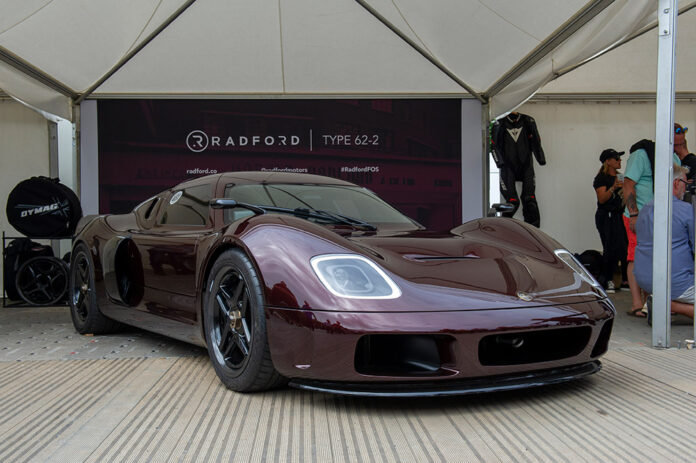 Radford’s coachbuilt Lotus Type 62-2 has won the Michelin Showstopper Award at the 2022 Goodwood Festival of Speed.

The prestigious accolade, voted for by the public, comes after the car made its global dynamic debut at the global event in front of thousands of fans.

Radford proved a major draw with showgoers, with huge numbers of visitors allowed to get up close and see around the upgraded Type 62-2, which was based within the Michelin Supercar Paddock over the four-day event.

An undeniable hit, the Radford Type 62-2 is not only a car that drives well on the race track and the road, but showcases exemplary attention to detail and craftsmanship throughout making it the epitome of outstanding beauty and ultimate performance.

Jenson Button: “Goodwood is always a wonderful event, but driving the Type 62-2 has made my 20th year at the Festival extra special. It’s fantastic to be able to be behind the wheel for the car’s global dynamic debut and show fans what we’ve been working on and it’s a true vindication that those same fans at Goodwood and from across the world have voted for our car as their Michelin Showstopper of the Festival, thank you to every single person who voted.”

Ant Anstead: “Winning the Michelin Showstopper Award is incredible. It was an amazing effort from the whole team to get the car prepared for this event and the positive response we’ve received throughout from fans and from customers in the car has been absolutely outstanding, especially considering the completion from far more established brands.

“It was actually emotional to see the car on the start line for the first time at Goodwood. We are constantly looking for new ways to improve the Type 62-2 so that it is the best it can be. The feedback from our drivers has given us enormous encouragement that the engineering refinements we have made to the car has made it feel and perform even better, ahead of first customer deliveries this year.”

Richard Bezzant, Marketing Director, Michelin Tyre PLC: “We’re adding another very special car to the winners of the Michelin Showstopper Award today. The Radford is a thing of beauty; a classic-inspired creation by Ant Anstead, Jenson Button, Roger Behle and the whole Radford team. The reaction to the car this weekend has been so positive and the public made a clear choice – this is a showstopper indeed.”

Since its reveal in August 2021, the Radford Lotus Type 62-2 has undergone a host of refinements to make it one of the finest driving cars available, with all models personally signed off by F1 World Champion Jenson Button, who was behind the wheel of the car to take it for its dynamic debut run up the hill on the first day at Goodwood on Thursday.

Engineering partner WCM has delivered a host of tailored manufacturing solutions within the cockpit, alongside several technical upgrades to the chassis and engineering refinements from technical partners like Rock Engineering and JUBU Performance.

In an all-new burgundy colour scheme, the Type 62-2 features Dymag carbon fibre rims with lightweight magnesium centres and an F1-inspired centre lock. JUBU have developed new valve springs, bearings and camshafts and Rock Engineering has lightened the chassis and spaceframe. The Type 62-2 now also features new engine positioning, which has been shifted to allow for the lowest centre of gravity possible, making it one of the world’s lightest supercars.