Iconic trademarks will be used for future special edition models 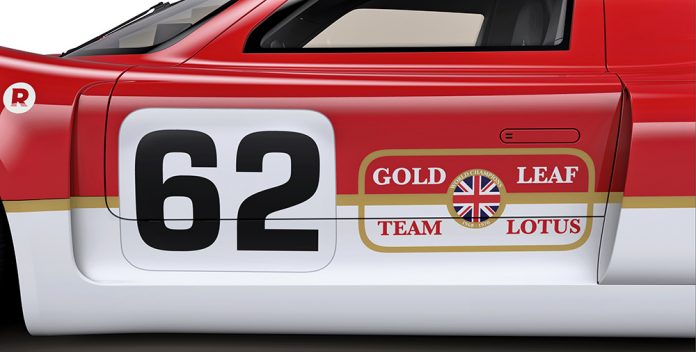 Radford, the global luxury coachbuilding brand with a British heart and soul, has today announced the details of the launch of its first model, Project 62. The launch of the car which will air online globally on 7 August 2021, and will be hosted by Radford in the Lyon Air Museum in Orange County, California, in front of a select audience of owners and VIPs. The car is based on Lotus technology and strictly limited to just 62 models – each of which will be bespoke to its owner.

The iconic coachbuilder has also announced today, the acquisition of its second US trademark for one of the world’s most iconic race liveries, Gold Leaf. The trademark for the Gold Leaf livery is now owned by Radford in the US, and will feature on future Radford models.

The Gold Leaf livery is well-known as the first sponsored Formula One livery. The now iconic red, white and gold colour scheme was applied after Colin Chapman signed a huge deal with Gold Leaf, and is most well-known on the Type 49B raced Graham Hill raced during the 1968 season. The colour scheme also featured on the famous Lotus 72 F1 car raced by Emerson Fittipaldi and Jochen Rindt in the 1970 season. The livery is also intrinsically linked with the Lotus Type 62, the car to which the modern Radford Project 62 pays homage.

Radford CEO, Dan Burge “The launch of our first car at the Lyon Air Museum in Los Angeles is something that we’ve been truly excited about for some time now. The Project 62 is our brand telling the world exactly what a Radford is, which is an exquisite blend of state-of-the-art technology with opulence and traditional craftsmanship, a superlative driving experience and the ultimate in personalisation. We can’t wait to reveal to the world what we’ve been working on for these past months and years. Project 62 is a very special car. We hope you can join us for our livestream announcement on 7 August.”

Jenson Button “It’s amazing to be able to announce another livery acquisition. Gold Leaf is, without question, one of the most iconic racing liveries ever to grace an F1 car, and the fact that it also features on the iconic Lotus Type 62, to which our car pays homage, makes it even more special.”

“We hope that you will all be able to join us digitally at the Lyon Air Museum on the 7 August as we reveal our first car to the world. It’s going to be an amazing event, and trust me, the car is going to be worth the wait – it’s a car unlike anything you will have seen before.”

Radford recently announced a partnership with British sports car manufacturer Lotus. The company announced its first car ‘Project 62’ will be ultra-exclusive and based on Lotus technology. It will be inspired by the Lotus Type 62, and only 62 cars will be produced.