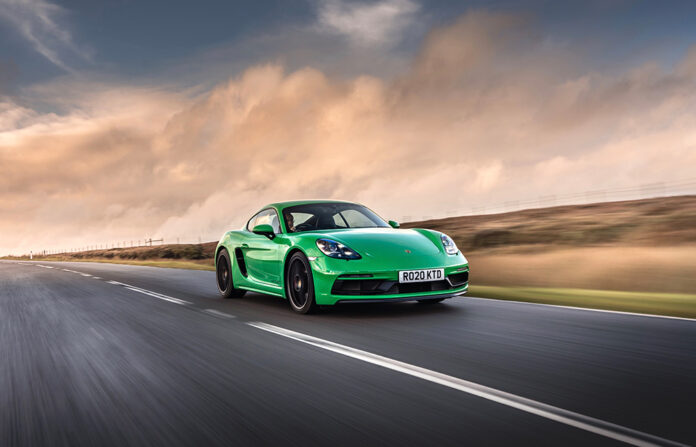 Threading its way through the Peak District in England is Snake Pass – an iconic sinew of tarmac that follows the contours and valleys of this beautiful part of the UK. Named after the pub on the route, which actually derives its name from the serpent on sixth Duke of Devonshire’s coat of arms, it is frequently voted as one of Britain’s favourite roads and offers an amazing sequence of corners through forests and across moorland.

It’s a grey, autumn day when we venture there. The only splash of colour is the punchy – and aptly named – Python Green paint of the 718 Cayman GTS 4.0. A snake-coloured car on the Snake Pass? This alone is the perfect excuse for a road trip. Except in this case there is another good reason to be here: the ROADS by Porsche app. This free-to-download software brings passionate drivers together all over the world, encouraging a sense of community that’s built around amazing stretches of road. Voted onto the app by fans of the route, we’re here to discover whether Snake Pass deserves its place on ROADS – and at first glance the scenery doesn’t disappoint.

Running west to east and starting in Glossop, a small town near Manchester, the road climbs steeply out of the suburbs and straight onto moorland. The tarmac flows with a certain rhythm and the Porsche can stretch its metaphorical legs on this initial uphill run. With 294 kW (400 hp) and 420 Nm from a naturally-aspirated flat-six engine, the Cayman’s manual gearbox gets a workout as the road’s summit approaches.

Up here, the fog rolls in quickly and it’s easy to see how Snake Pass could become impassable in winter. Indeed, because it crests over the hill outside Glossop and because this is the north of England, snow can be a problem in the colder months, often forcing the route to close.

This is the only time the road crests over a summit – at most of the other points it snakes along the middle of the topography, rarely dropping into the valley floor but never going back over the top either. As it drops down from the hill outside Glossop, there are a series of challenging curves towards pine forests and deciduous woods as the Cayman kicks the trees’ discarded leaves up from the floor. Here, the Python Green machine finds no camouflage, contrasting vividly with the autumnal colours that line the road. It’s a beautiful road through this section and a stark contrast to the open moorland. The sightlines aren’t as clear, but that doesn’t matter – simply drop the speed to admire the view.

It appears the Cayman may be the ultimate travelling companion on the Snake Pass: being naturally aspirated, the 718 GTS 4.0 reacts to every twitch of the throttle and, with the sports exhaust button pressed, the evocative flat-six engine note provides an excellent accompaniment as the sound bounces off the trees and valley sides.

From the woods, the road opens up again, surrounded by drystone walls and sheep munching on the last of the year’s fresh grass. Technically, Snake Pass finishes at the Ladybower Reservoir at Ashopton, but the A57 carries on towards the city of Sheffield, from where it’s easy to get onto a major motorway and on for wherever the journey takes you.

Or you could just turn round and do it again, as we do.