When McLaren takes over a racing circuit for a weekend and hosts its family of customers, the result is called Pure McLaren 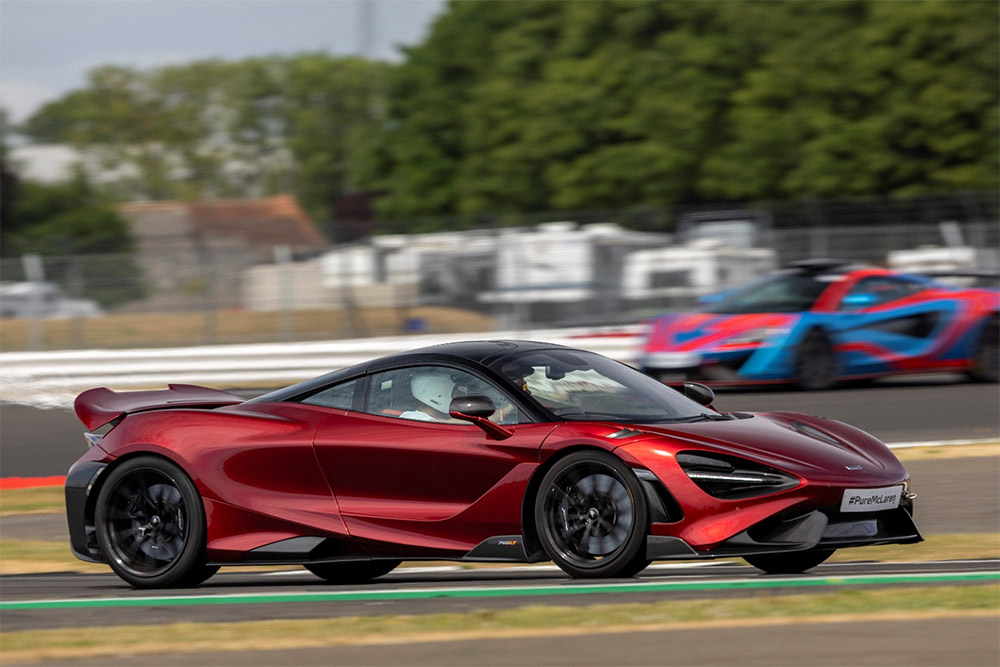 It is difficult to steer a McLaren 720S around the Silverstone Circuit without hearing the echoes of history. The runways of the former airfield formed the foundation for what became the Silverstone Circuit and the venue for the first British Grand Prix in 1948. New Zealander Bruce McLaren was not even a teenager at the time, but his surname has become a familiar presence around Silverstone. 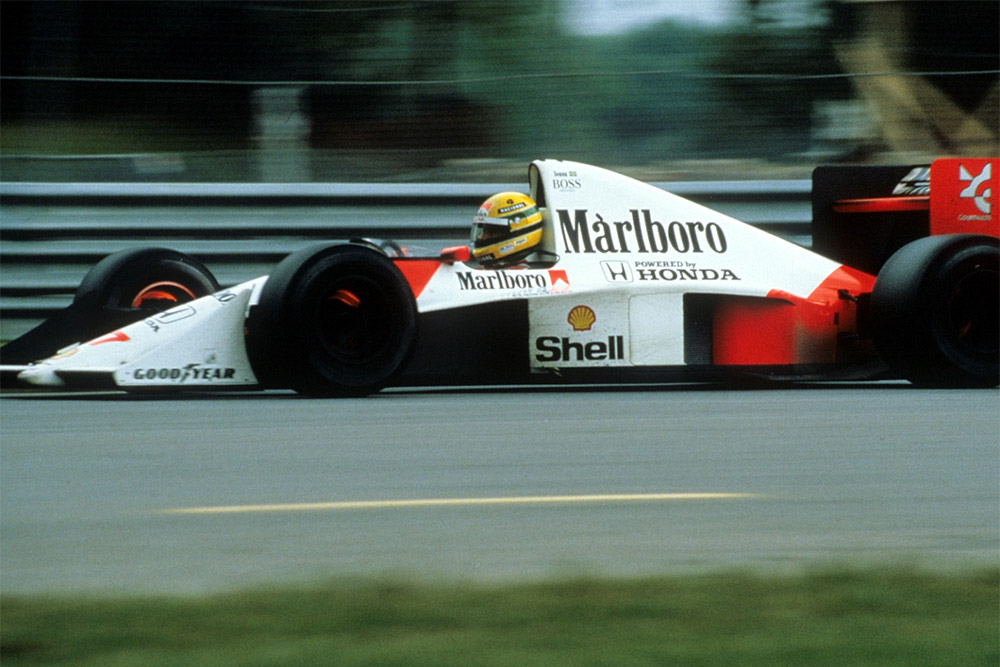 For decades, Silverstone has witnessed many chapters in McLaren’s Formula One story. Drivers of legend include Hunt, Lauda, Senna, Prost, and Hakkinen. Books have been written about cars such as the MP4/4. Engineers and mechanics have done battle with the unforgiving stopwatch and scale. Not content to rely on historical laurels, the fight continues to this day, as evidenced by the podium hardware that continues to fill out McLaren trophy cases. 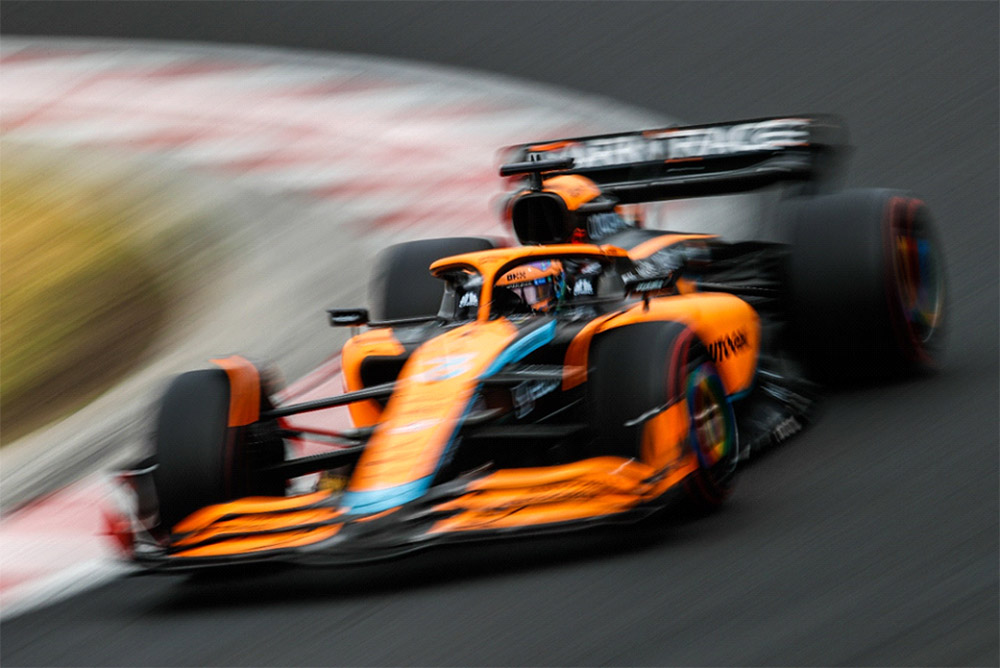 Motorsports requires the purity of single purpose. There are no consolation prizes or participation trophies. When McLaren takes over a racing circuit for a weekend and hosts its family of customers, the result is called Pure McLaren. Track time at world-class venues, driver coaches, hospitality, and a mix of McLaren machinery is an intoxicating blend. 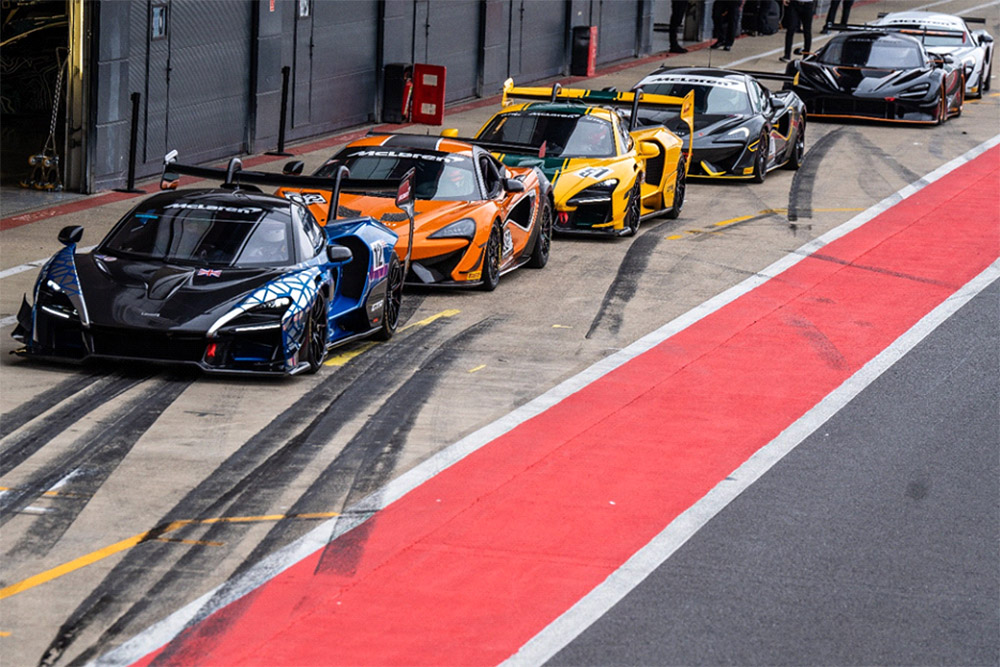 The McLaren team previously hosted Speed Journal principal Jeff Francis for the Pure McLaren experience at Donington Park. Another recent Pure McLaren event provided an opportunity to drive his first laps on the Silverstone Grand Prix course – and do so at the wheel of one of Woking’s mechanical wonders. 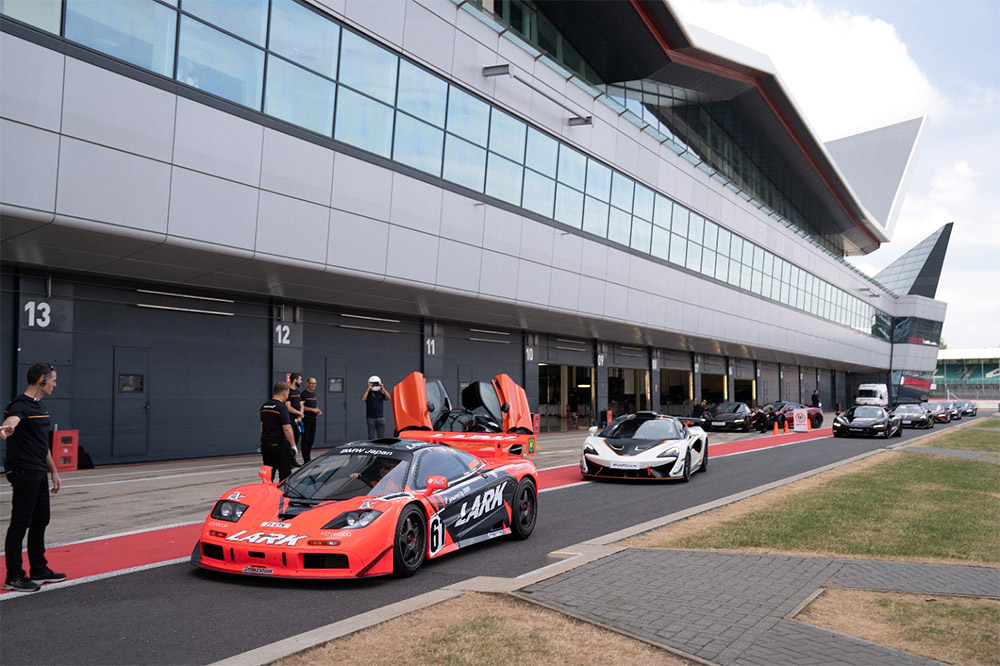 The Pure McLaren Silverstone event gave owners the opportunity to hustle their steeds around Silverstone with the benefit of skilled driver coaches at their side. McLaren made cars available to those without cars of their own. Similar programs filled out the schedule for both road and race cars. Showing the exceptional nature of a Pure McLaren event at Silverstone, the garages were filled with everything from McLaren’s latest road and race cars to a pair of F1 supercars to full-fledged privately owned Formula One cars. 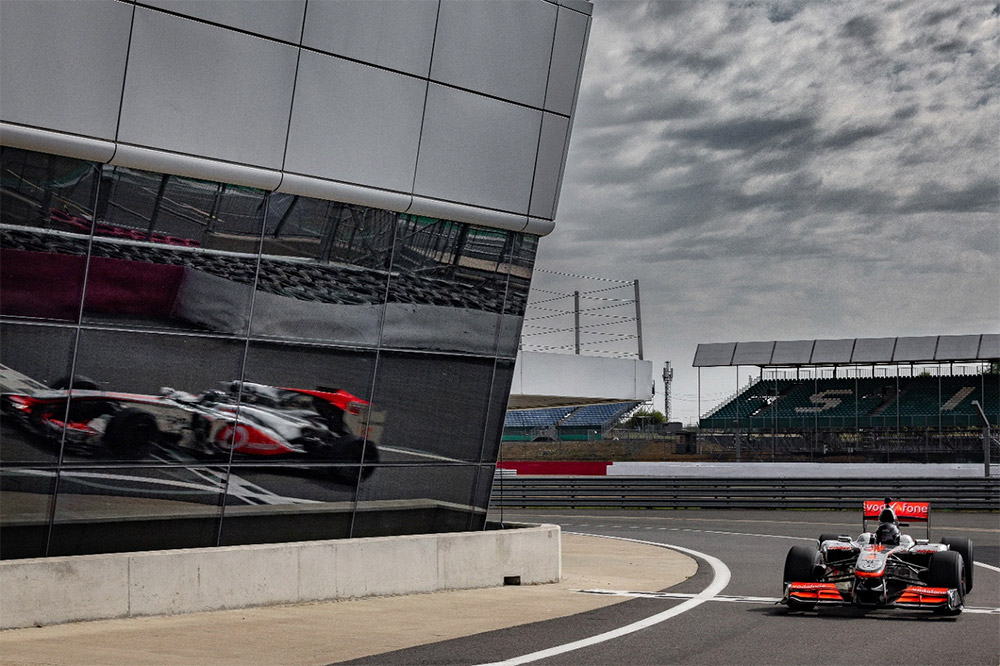 Refreshments and breakfast welcomed guests to the Pure McLaren event at the Silverstone Wing, an event center built for just such events. The first-floor garages open directly to a pit lane that feeds into the 3.667-mile road course at the Farm Curve. 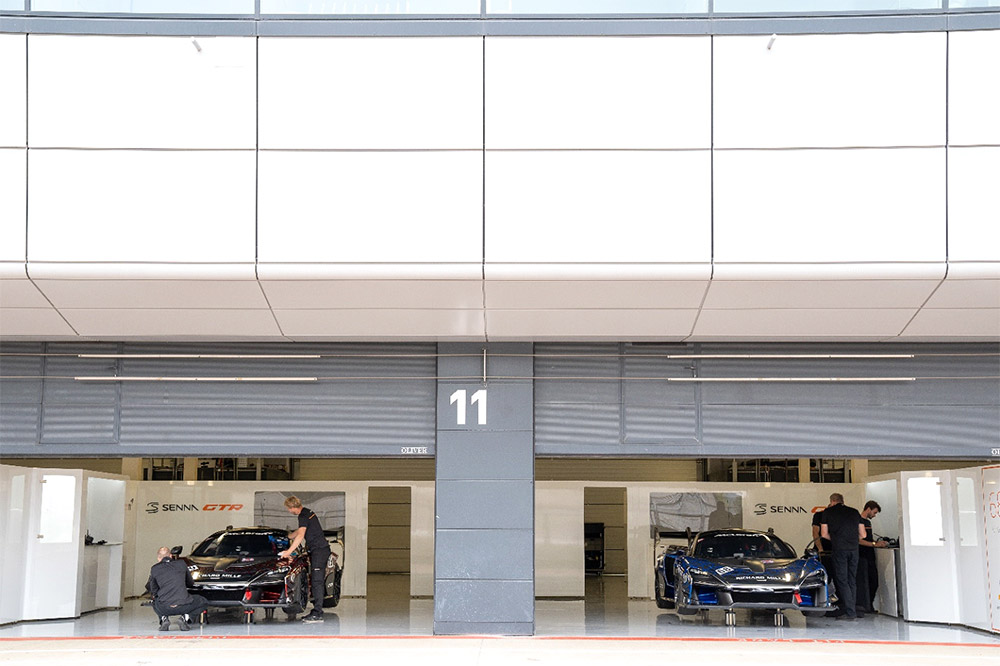 Franics looked forward to three driving sessions in a shared black 720S provided by McLaren for the occasion, including tutoring from an experienced McLaren driving coach. The mighty 720S has its own presence. The shape is a mixture of aggressive and beautiful. Wind tunnels and computer design have informed its lines, but McLaren design language makes its origins clear even without the benefit of the badges. 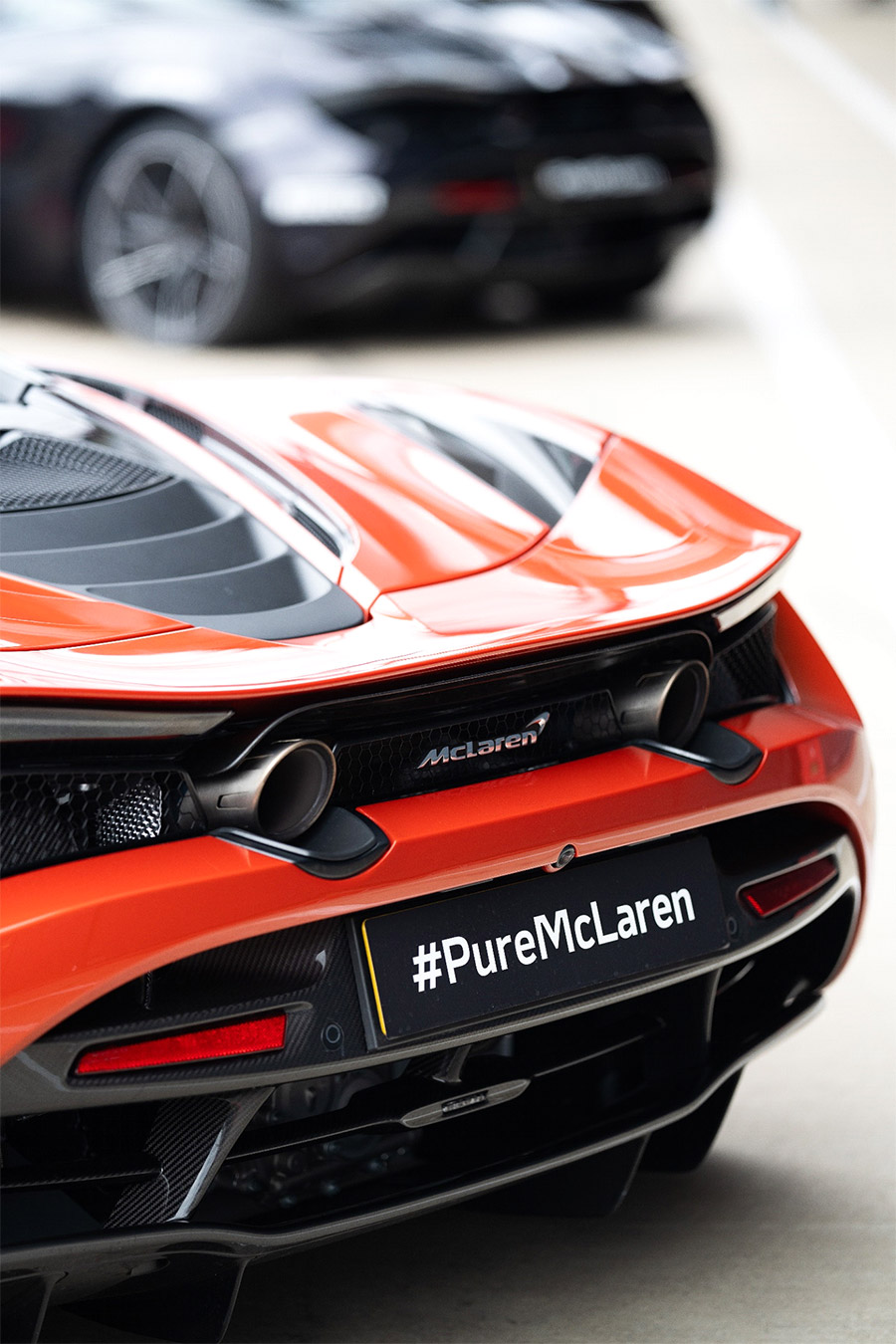 After an initial driver briefing, guests went directly out to their assigned 720S to meet with their coaches. The doors dramatically opened upward to the sky to welcome their visitors. The car cut a low profile waiting on pit lane, poised for action, just as the supercar gods intended for such machines. Entry for the driver requires either sitting on the rocker sill and pivoting inward or sliding one foot inward and following with the other. The 720S ordinarily is destined for road duty, but the Pure McLaren fleet was outfitted with a safety harness that accommodated a Hans device to protect the driver. 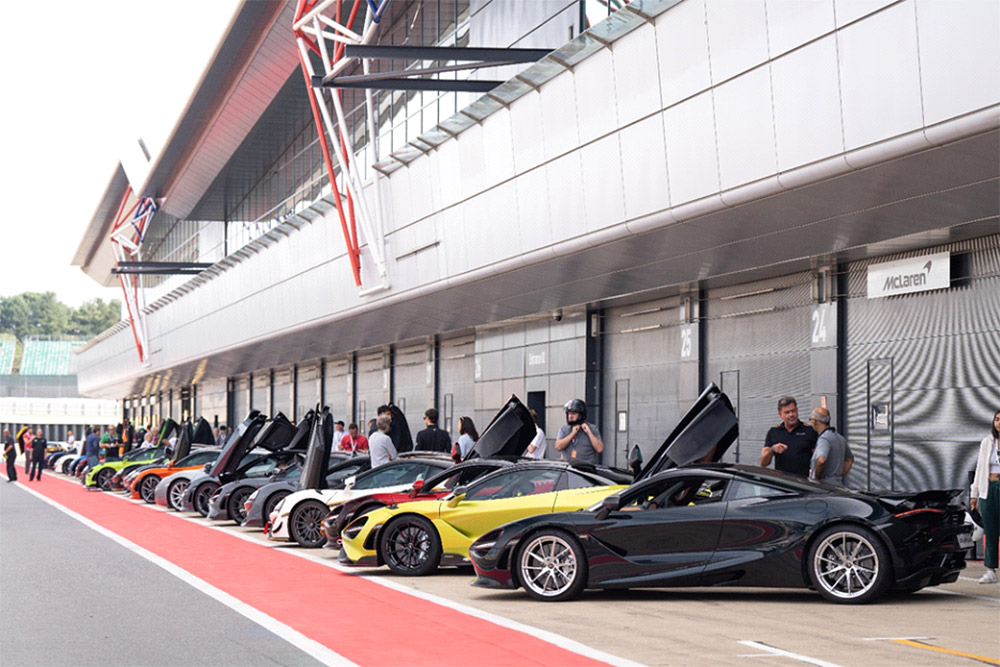 The adjustable seat and steering column made for a comfortable seating position. Visibility isn’t ordinarily the strength of an exotic car, but the 720S designers incorporated good sight lines. The rear-view mirror typically allows the driver to keep an eye on approaching traffic, but for laps with a driver coach aboard, the mirror pivoted to allow the coach to keep an eye on faster traffic while the student focused forward. The car was also outfitted with two-way radio that facilitated dialogue between driver and coach. Each coach stayed with the car and split time with two guests. 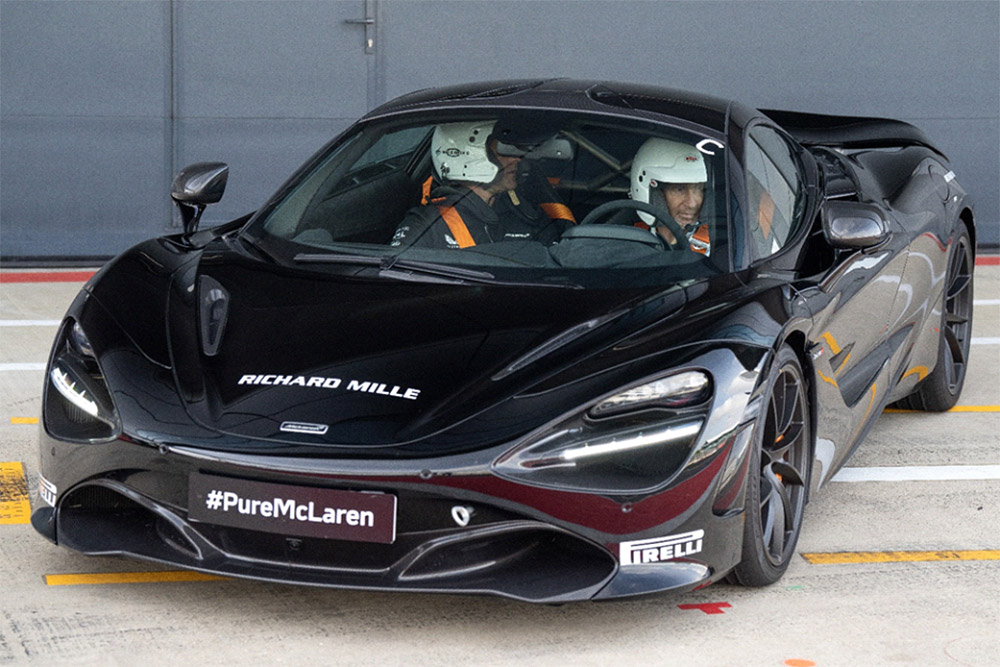 After twenty minutes of track time, the first driver returned to pit lane. The driver got a de-brief and the car got a check-over from the McLaren crew and refueling if needed. The second driver climbed aboard for their 20 minutes around the Grand Prix track. Twenty minutes is the perfect spurt to get into a groove and still give the mind time to rest and reflect between sessions and focus on the next. 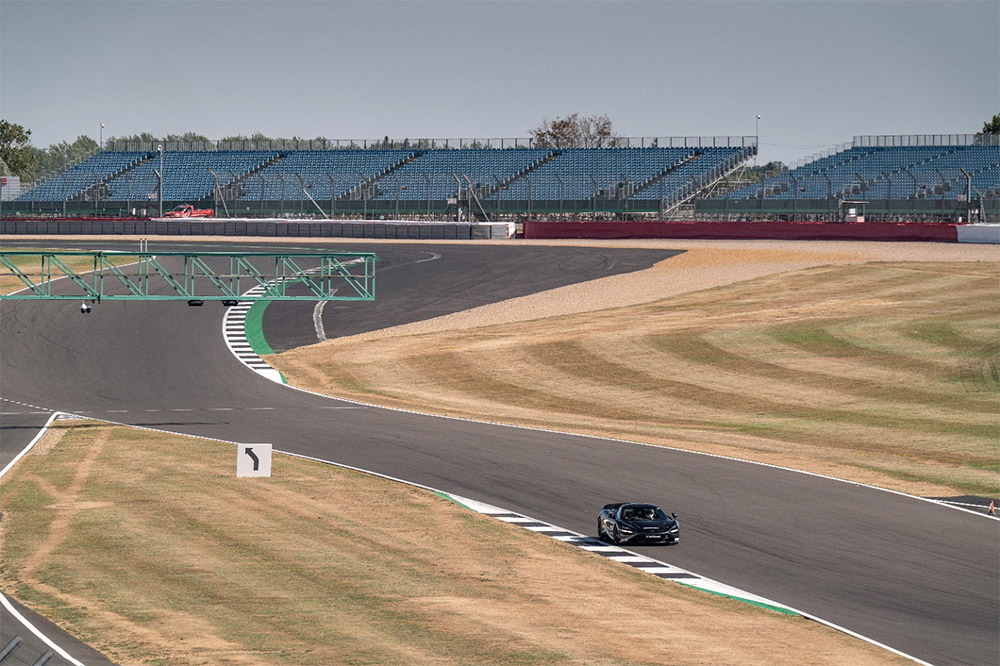 The opening session can be overwhelming for first timers. Speeds are high and corners come fast. The circuit appears massively wide with huge run off areas. Some parts of the circuit can leave the driver slightly lost due to the lack of landmarks. The flat track is especially wide in areas such as Village and The Loop complex where the driver can only utilize a portion of the paved surface rather than allowing the car to track all the way out to the edge. It takes time to fully learn the sequence of corners and nuances of the lengthy circuit. As confidence grows and speeds rise, track knowledge needs to become instinctive. As a former airfield with flat runways, Silverstone lacks distinct elevation changes that might otherwise act as reference points. 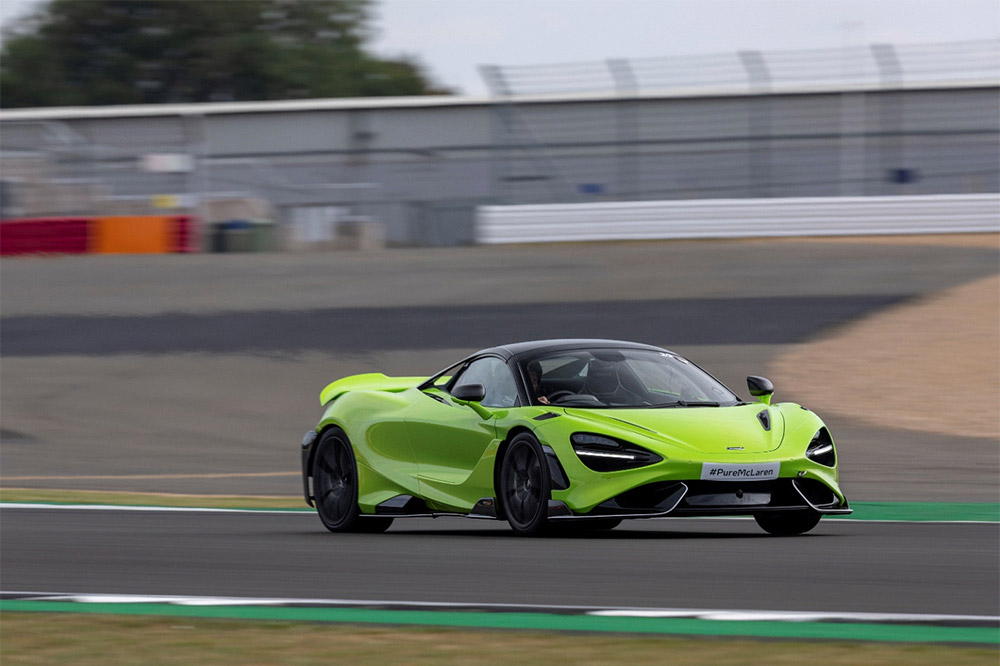 The more variables involved, the more challenging the task for the driver. Learning both a new circuit and a new car could be daunting, but the 720S made it easy for the driver to focus on the road rather than adapting to the car. The 720S blends its substantial 710 horsepower with ample handling and braking capabilities, taking advantage of electronic magic to keep it all in harmony. 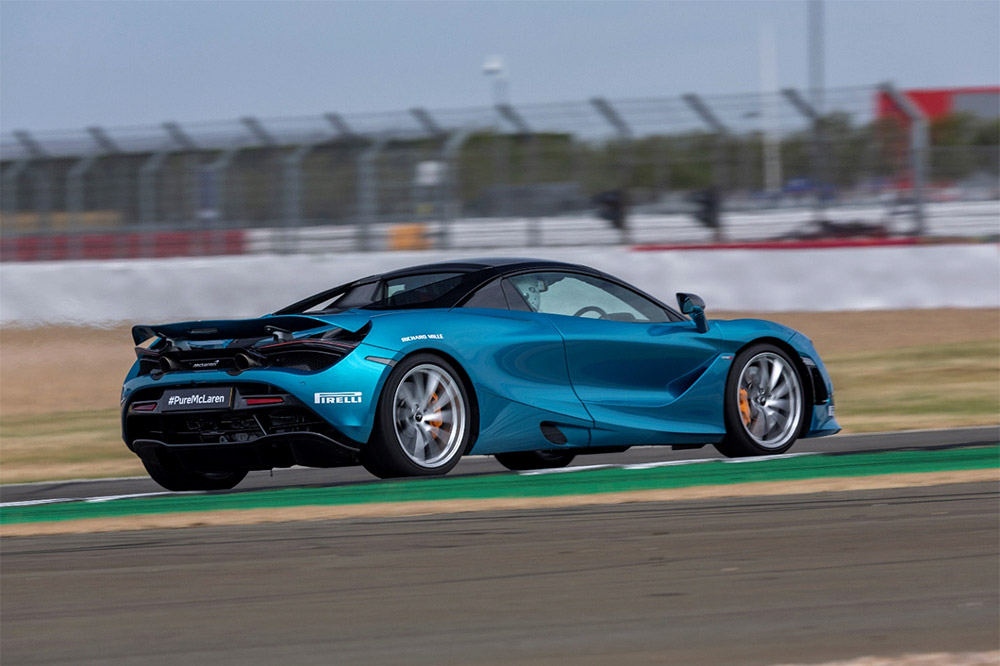 Linking the high-speed corners around Silverstone takes a deft touch. The run through Copse and through Maggots and Becketts is famously tricky. Getting it wrong at the outset makes getting through extremely difficult. One corner can easily compromise the next. Getting the flow right and being able to tie them together is part of what makes Silverstone a world-class circuit. After all, if it was easy, it wouldn’t be a challenge… 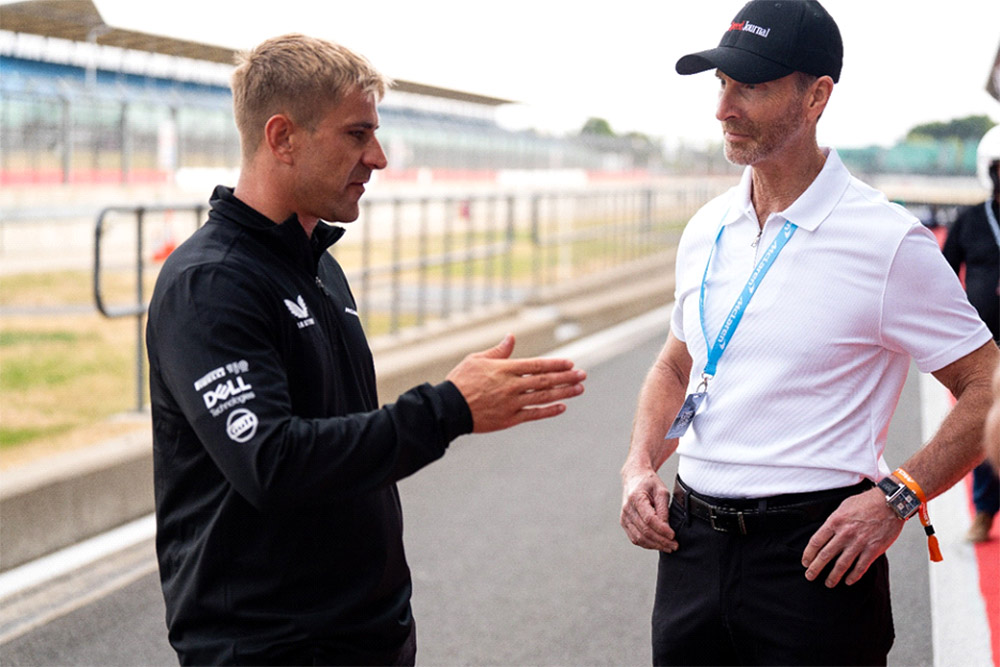 Driving coach Mitch helped Francis to quickly climb the Silverstone learning curve. The benefit of a good driving coach was obvious. With his knowledge of the track and car, he encouraged Francis to accelerate aggressively and carry speed into intimidating corners like Stowe. Once the brain overcomes the unnerving sensations of uncertainty, it finds the courage to vigorously work the throttle and brake to unlock seconds on the stopwatch and release more of the McLaren’s capabilities. 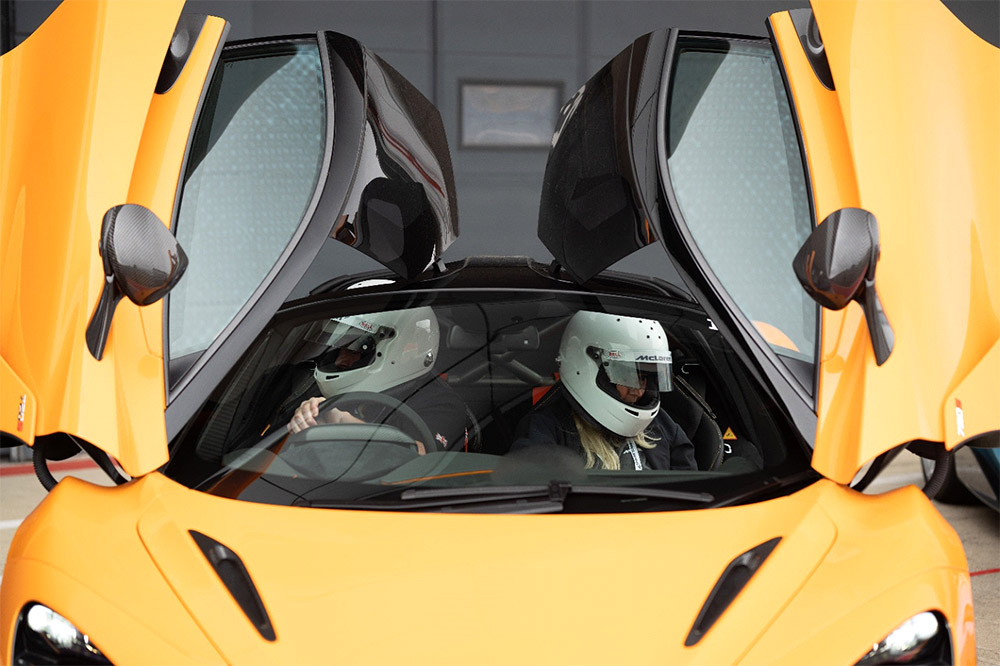 A driving coach can make or break a guest’s experience. Patience and understanding a driver’s capabilities and knowing how much to push are critical. Mitch was well connected to his drivers. McLaren’s choice of driver’s coaches is always top-notch and it was enjoyable visiting with two driver coaches from prior McLaren encounters. 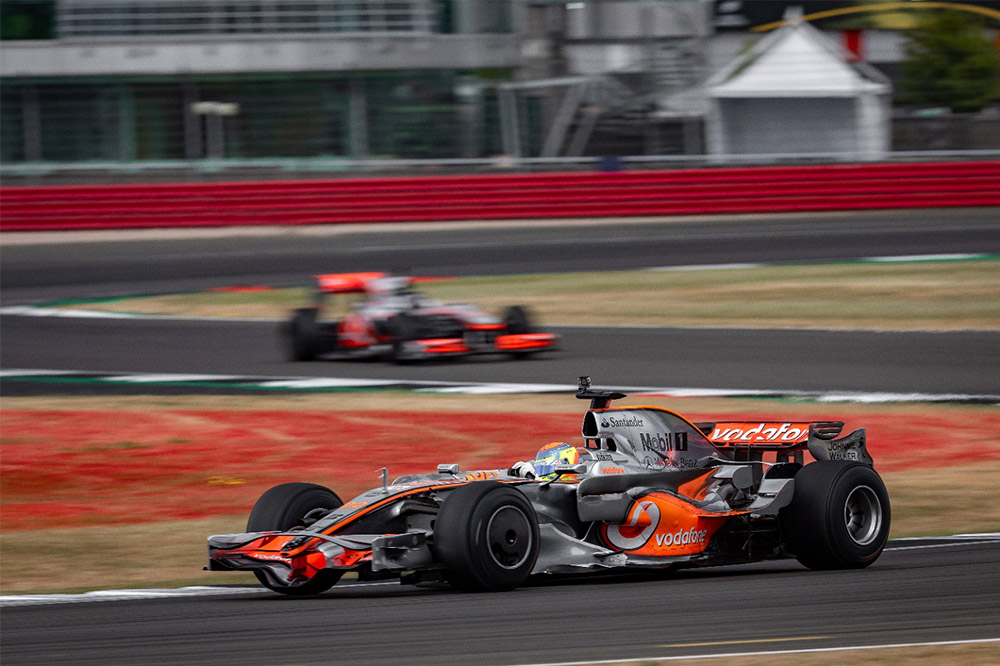 Between sessions, the track was cleared for two customer-owned McLaren Formula One cars formerly driven in competition by Lewis Hamilton. A 2008 McLaren MP4/23 and a 2010 McLaren MP4/25 flew around the circuit together, demonstrating the significant difference between high-performance road cars and bespoke purpose built open-wheel race cars. Legendary professional driver Emmanuel Collard did shakedown laps in the MP4/23 before turning it over to its owner. 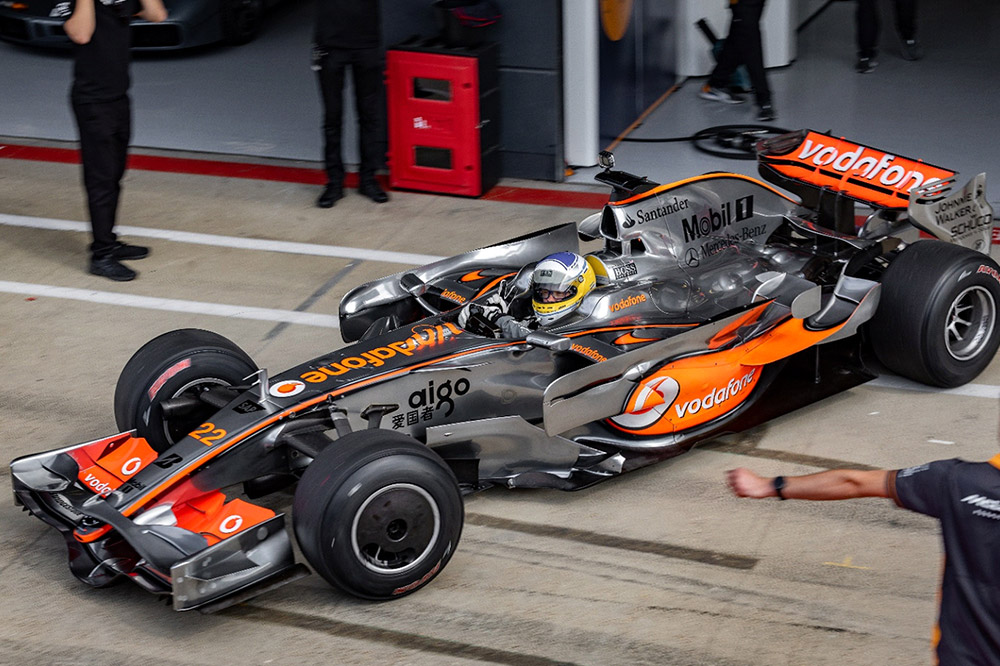 The high-revving V-8 engines were a treat and gave a very small glimpse of how a full field of Formula One cars would have sounded in anger. The duo entered and exited pit lane in front of the other guests, many of whom pointed their camera phones in the direction of the rolling sculpture. Kudos to the owners who chose to give their cars exercise rather than relegate them to a life of static display. 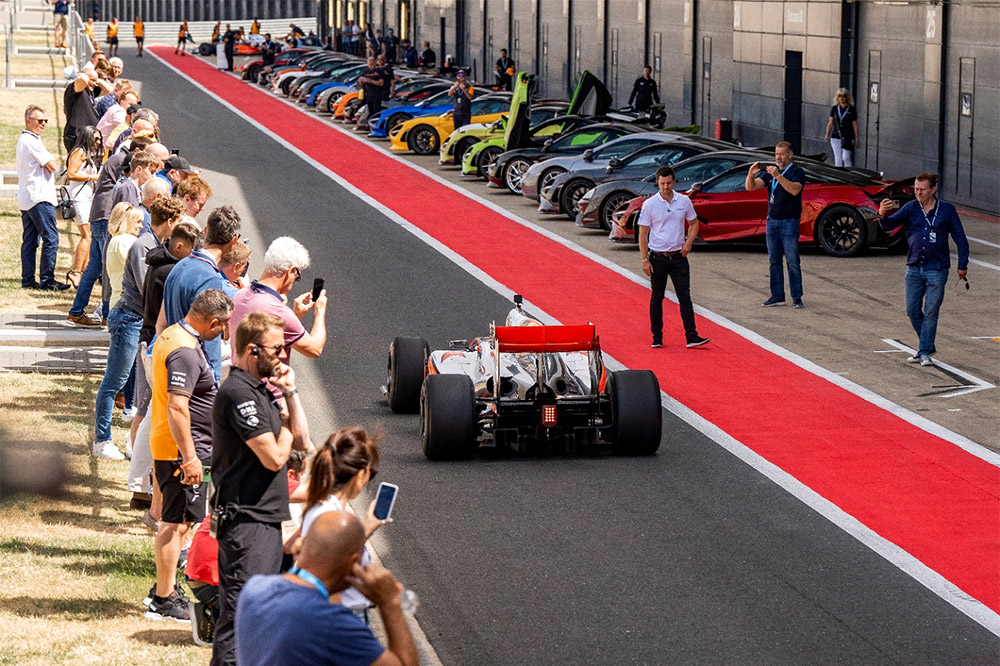 With the Formula One exhibition concluded, drivers were released for the second session. With the benefit of the first session introduction, the second applied those lessons. The circuit’s technical challenges only multiplied as speeds increased. The driver learned to look further down the track and pro-actively attack the course rather than react to corners as they come. Mitch continued to push as Francis gained confidence in the track and car. Corners began to link together more seamlessly as comfort and knowledge of the track improved. 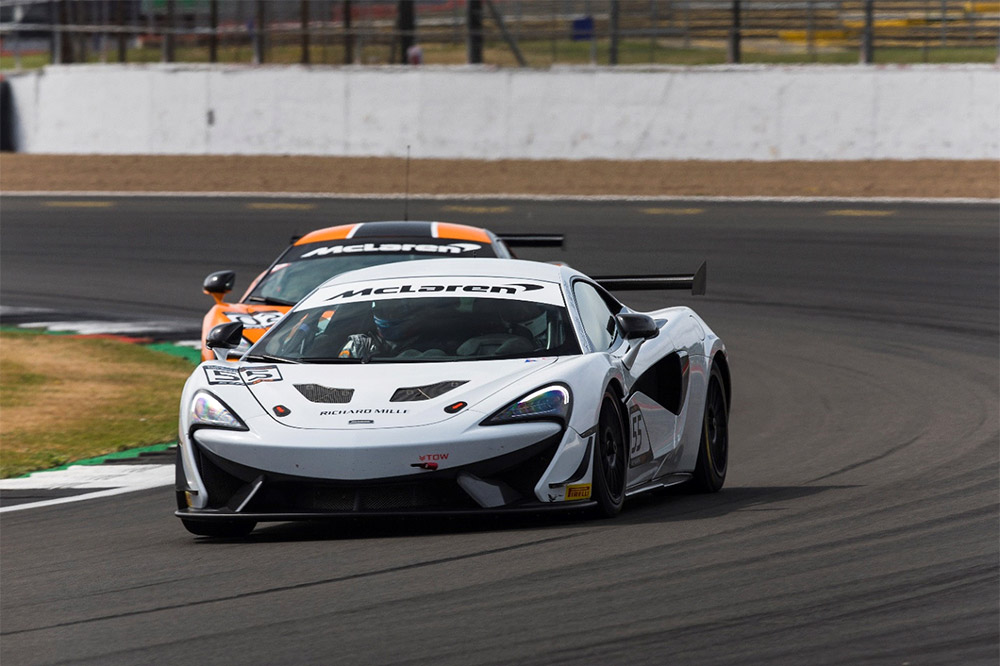 With the session over, other Pure McLaren attendees took their turns to run around the circuit. McLaren Owners Club members took their cars for parade laps. White and orange cars from the 570S GT4 racing school logged laps in their race-spec GT cars. A pair of F1 supercars made laps to the delight of onlookers, one road car and one race car. With only 106 originally made, seeing two at speed was a rare treat. The variety of machinery up and down the pit lane was a rolling McLaren exhibition. The enthusiasm of owners was matched only by that of the attending McLaren crew. 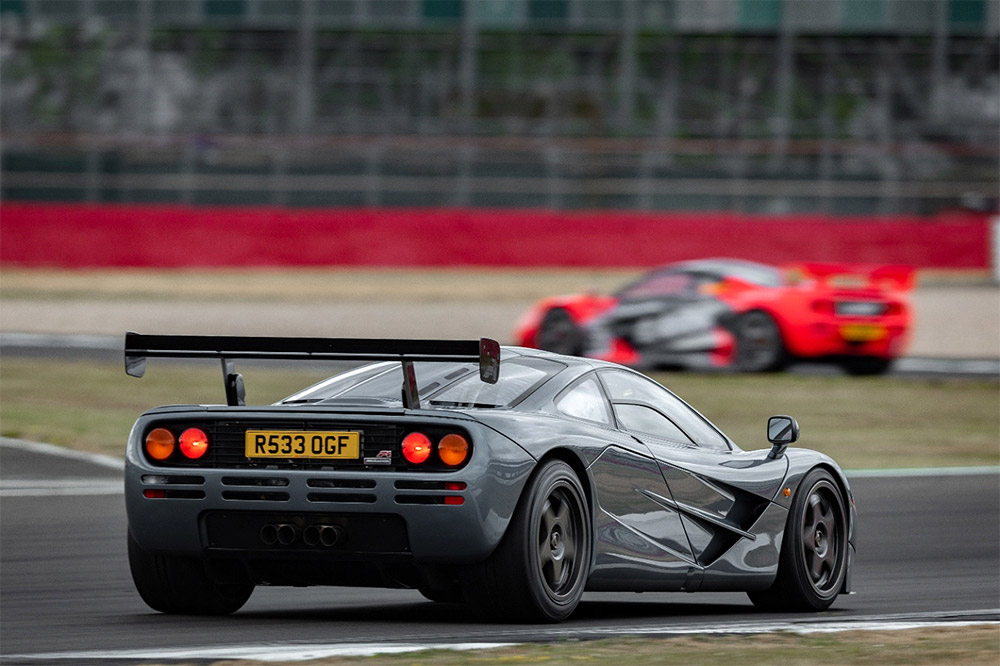 Chatter in pit lane looked ahead to the recently announced McLaren Artura race car. While the GT4-spec version is constrained by regulations, the V-6 Artura suffers from no such limitations. The target is GT3-type performance in a dedicated single-spec racing series. If desired, owners still have the option to convert their racers to GT4-spec. 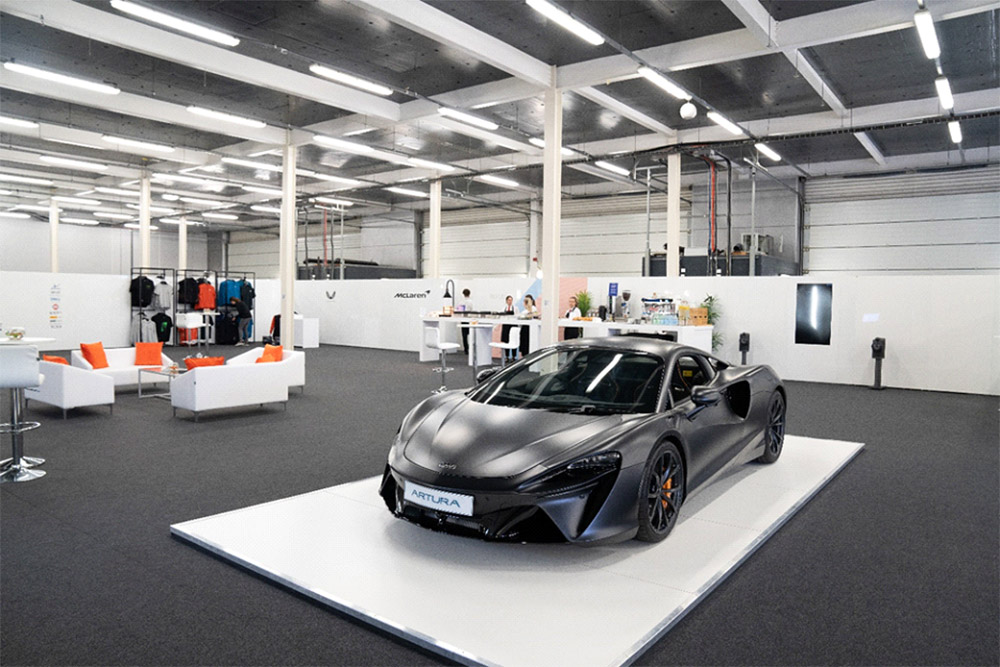 During the next break between sessions, Mitch and Francis did a turn-by-turn lap in detail on the white board to sharpen focus on getting the most out of the third round. The pair agreed to focus on trail-braking into Brooklands. Preparation paid off with considerable improvement once out on track. The trail breaking technique improved the performance and flow considerably. Progress was evident throughout the lap, but the Copse/Maggots/Becketts sequence continued to demand respect. 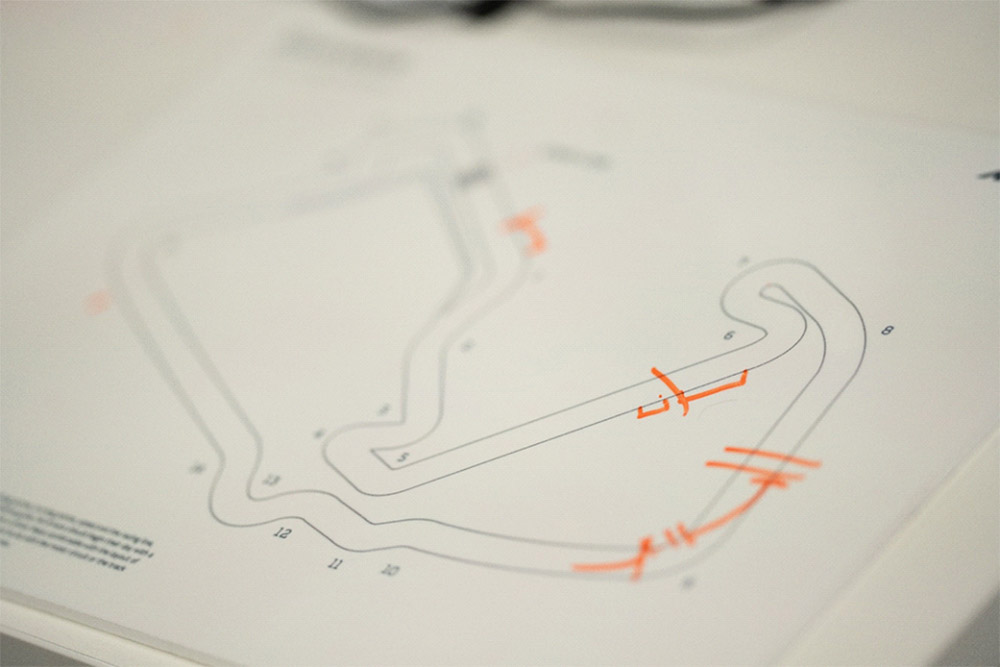 While there was improvement, there was also unfinished business left for a future visit. Progress through the day was tangible and it was rewarding to better understand one of the world’s best Formula One circuits from behind the seat of a 720S. Grand Prix drivers regularly make the difficult look easy. The experience re-affirmed their significant skill and talent. 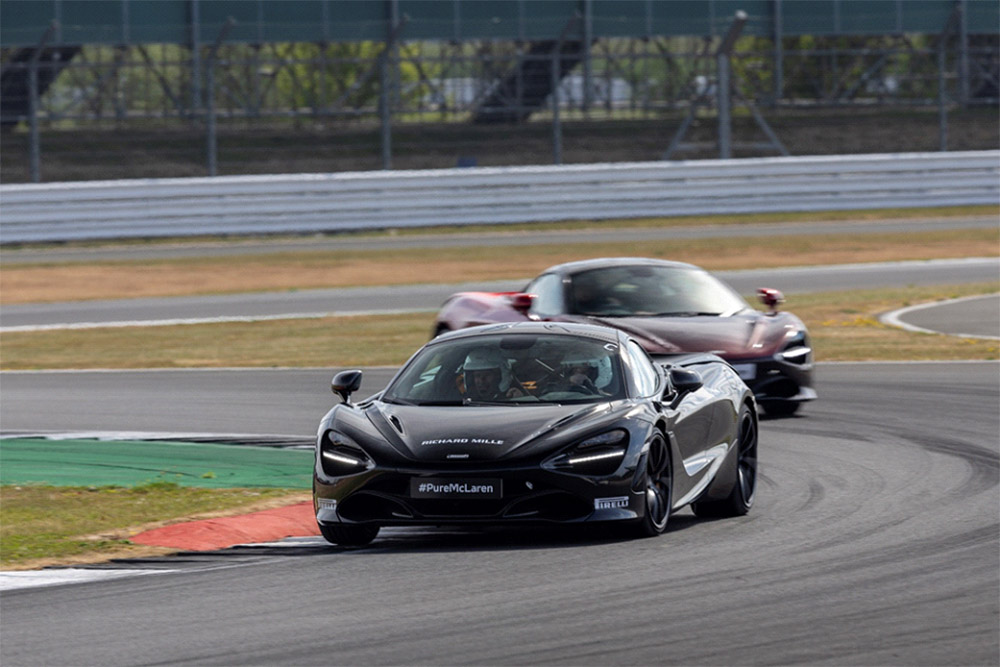 As one might expect of an English summer day, rain was always a threat. Despite a cloudy morning, the rain held off and the sun broke through for the afternoon. In terms of logistics, the McLaren team kept the event working smoothly with the precision and organization of a Formula One team. Mechanics kept the machinery serviced while others ensured drivers enjoyed top-tier hospitality. 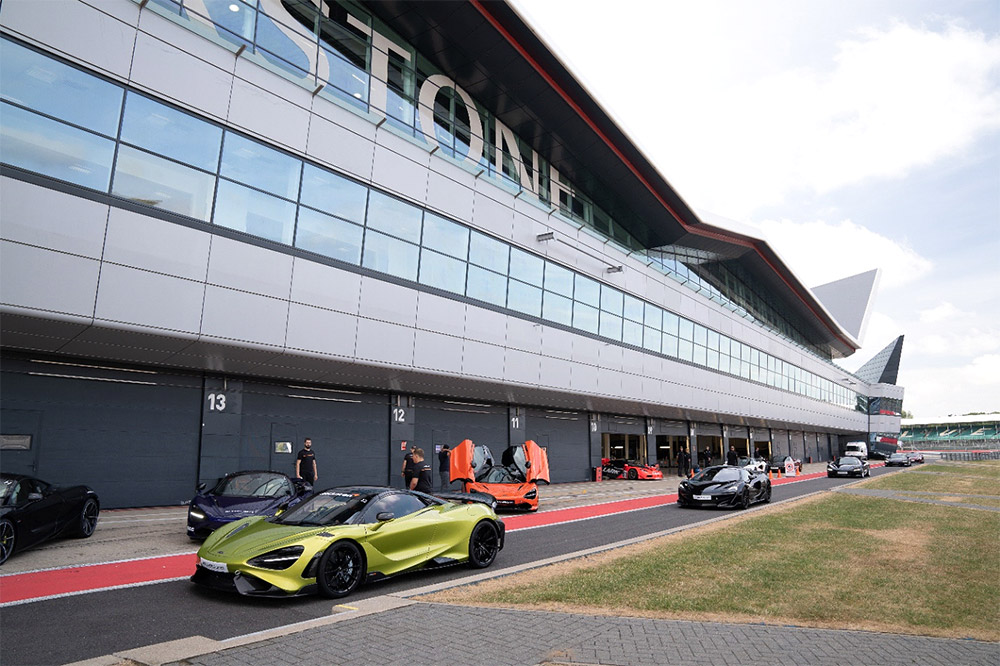 For McLaren owners and others who appreciate the McLaren magic, a Pure McLaren event is an immersive experience. While Pure McLaren events are scattered across the globe, driving a McLaren around the Silverstone Circuit connects one to those who drove the same pavement and flew in the same skies before in a tiny way. Even that sliver of a connection is a pure experience unavailable elsewhere.

The Speed Journal would like to thank McLaren and the McLaren staff and instructors for their hospitality at Pure McLaren Silverstone.