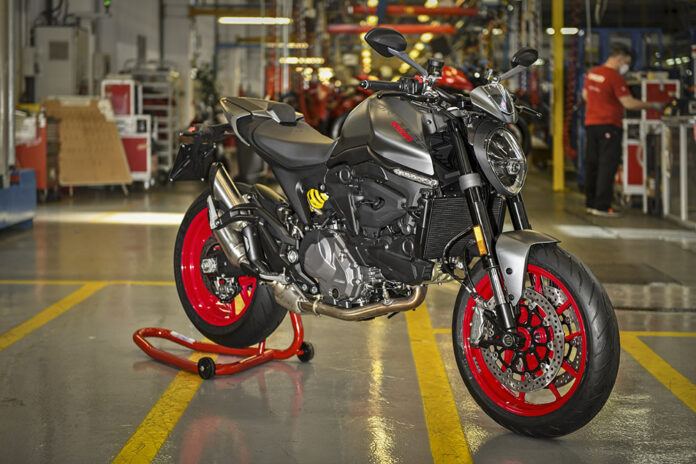 Production has begun at the Ducati factory of the new Monster, which will be available in all Ducati dealerships starting from April 2021.MotoGP riders Pecco Bagnaia (Ducati Lenovo Team), Enea Bastianini and Luca Marini (Esponsorama Racing) also attended the assembly phase of the first model to come off the production line, shortly before leaving for the tests of the 2021 racing season in Qatar. They visited the factory for this special occasion and were able to personally observe the birth of the new model through the explanations of the expert line operators. Bagnaia, Bastianini and Marini spent a whole morning in Ducati, having lunch in the company canteen and experiencing first-hand the affection of all the employees present in Borgo Panigale.

With over 350,000 units produced and distributed throughout the world, the Monster family is the best-selling and the longest running in the history of the Bologna-based company. The new model, presented during the 2021 Ducati World Première, is inspired by the original 1993 philosophy: a lightweight and essential sport naked with a frame derived from the Superbike and a powerful engine that is at the same time perfect for road use. The new Monster is light, compact and fun. An ideal motorcycle both for those approaching the world of two wheels for the first time and for more experienced motorcyclists, ready to provide fun to new generations of motorcyclists thanks to its brilliant and easy-to-manage performance, extremely low weight, a nimble and intuitive chassis and state-of-the-art electronic equipment.

The heart of the bike is the 937cc L-twin Testastretta 11° engine with desmodromic distribution, which makes the Monster sporty and fun. Maximum power stands at 111 hp at 9,250 rpm with a torque of 9.5 kgm at just 6,500 rpm. Thanks to the increased displacement compared to the 821-cc version, torque has improved at all revs, particularly medium-low ones, which are the most commonly used on the road and through the curves. The engine of the new Monster guarantees thrilling performance and riding pleasure, also thanks to the new gearbox and the Ducati Quick Shift Up/Down fitted as standard.Ducati engineers and designers have devoted great attention to reducing the total weight of the new Monster. The vehicle has been completely redesigned: subframe, rims, swingarm and above all the frame, which is now an aluminium front frame with load-bearing engine, conceptually like that of the Panigale V4 and 4.5 kg lighter (60% less) than the trellis. The work carried out on the chassis, together with a lightening of 2.6 kg on the engine, has taken the dry weight of the Monster to only 166 kg (almost 20 kg less than the Monster 821) and this translates into an agile bike in traffic and with excellent handling.

The design reinterprets the key elements of the Monster, such as the “bison-back” fuel tank, the circular headlight, the clean tail and the engine centre-stage, placing them within a more contemporary vision. The shapes have evolved towards the exaltation of essentiality and technology, with very narrow sides that allow the rider to easily place his feet on the ground when the bike is stationary, also thanks to the saddle height which is now 820 mm in the standard version, and which can arrive at 775 mm by mounting the low saddle accessory and the lowered suspension kit.The ergonomics of the bike are also improved compared to the 821 version by moving the saddle closer to the handlebar, which allows the rider to maintain a more upright position and less loaded on the wrists, with greater control over the bike. The steering angle has been increased to 36° (a full 7° more than the 821) to facilitate manoeuvres and ensure maximum manoeuvrability even at the low speeds and in the urban context, while the footrests have been repositioned to offer a more comfortable riding position.The standard electronic equipment enables the performance of the bike to be expressed with a high degree of active safety and includes ABS Cornering, Traction Control and Wheelie Control, all adjustable to different levels of intervention. The sporty character of the bike is also underlined by the Launch Control which ensures lightning-fast starts. The standard equipment also includes sophisticated elements, such as a hydraulic clutch, radial brake and clutch pumps and adjustable levers.

The new Monster is equipped with three Riding Modes (Sport, Urban, Touring) that make it possible to shape the character of the bike according to tastes and needs. Engine delivery is particularly smooth thanks to the Smart Power Modes, which provide specific torque curves in first and second gear (Urban and Touring) or only in first gear (Sport), making riding easier. Everything is easily manageable through the handlebar controls and the 4.3″colour TFT dashboard, characterized by racing graphics that echo those of the Panigale V4, with a large rev counter that shows the indication of the gear engaged in the centre, to always have the essential information under control during sporty riding. Connectivity is guaranteed by the presence of the Ducati Multimedia System (DMS), which enables the smartphone to be linked to the bike via Bluetooth. A smartphone can also be recharged thanks to the addition of a functional USB socket under the saddle.The Monster has always been synonymous with customization. For this new version, stickers and cover kits with graphics have been created, which enhance the shapes of the Monster and celebrate Ducati’s sportiness, allowing you to make your bike even more unique. On the Ducati.com website there is a configurator section, where it is possible to view all the customization options.To encourage the entry of young enthusiasts into the world of two wheels, the bike is also available in a depowered version for A2 license holders.The new Monster is available in the range in Ducati Red and Dark Stealth with black wheels, Aviator Grey with Red GP wheels. For those who want an even more accentuated sportiness, the Monster Plus version is also available in the same colours with the front fairing and passenger seat cover as standard.#Monster #JustFun

Hagerty Partners With Motorcycle Racer and Isle of Man TT He...

Ducati Track Days Return for 2021, Will Include Brands Hatch...