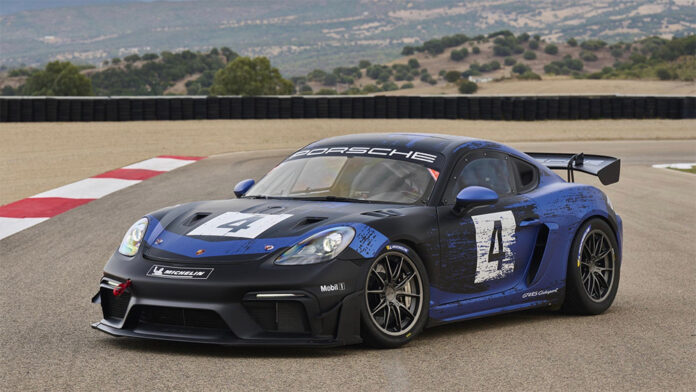 “We thrive on competition, and will always push for improvements,” said Volker Holzmeyer, President and CEO of Porsche Motorsport North America. “This is what our customer teams expect of us and what we demand of ourselves at Porsche. Acting on their feedback, we’ve made the new 718 Cayman GT4 RS Clubsport more capable than ever. It’s quicker, even more rewarding and confidence inspiring to drive – exactly what drivers competing in the IMSA Michelin Pilot Challenge and SRO series need to be successful.“

Porsche began offering the Cayman GT4 Clubsport of the 981 generation in 2016, entering into this new customer racing format early with a competitive car, and 421 units were built up to 2018. In 2019, the next generation model debuted based on the 718 Cayman GT4. It was also a success: Around 500 units have been produced to date. The strong demand for these vehicles is also due to the low running costs. The use of proven series production technology combined with racing-specific components reduces the cost for customer teams.

“The GT4 Clubsport has a special place in my heart,” adds Holzmeyer. “As I’ve been deeply involved with the car from the start, ever since it first began development. Therefore, it’s also a personal ambition for me to continuously improve it, to make it better and better.”

The 500 hp 4.0 liter six-cylinder boxer engine is taken directly from the current 911 GT3 Cup racing car and is 18 percent more powerful than the 3.8 liter engine used in the previous model – the 718 GT4 Clubsport. Thanks to an optimized air intake, maximum power is achieved at 8,300 rpm – 800 rpm higher than previously. The new engine can rev up to 9,000 rpm and develops 343 lb.-ft. at 6,000 rpm, while the previous engine generated 313 lb.-ft. at 6,600 rpm. The result is a much wider, more usable power band of the new engine, improving the drivability of the car for pro-racers as well as amateur drivers alike.

The suspension of the 718 Cayman GT4 RS Clubsport was also extensively enhanced. The damper technology was revised from the ground up to offer an optimized responsiveness and a further improvement in body control, making a significant impact on track performance and handling. Two-way racing adjustable shock absorbers with further improved valve characteristics as well as adjustable double-blade anti-roll bars, front and rear, are among the updates. Ride height, camber and toe are also adjustable. Additionally, three different spring rates for front and rear axle are available. Special NACA ducts in the front lid feed air efficiently to the large race braking system with 380 mm multi-piece rotors that are vented and slotted. The Porsche Stability Management-System (PSM) is programmed specifically for the track and includes a switch for traction control, ABS and an updated stability control programming.

The aerodynamics of the 718 Cayman GT4 RS Clubsport have also been enhanced in great detail. Front dive planes as well as an enlarged front spoiler lip increase downforce at the front axle. Fender vents inspired by the 911 GT3 R and special air curtains calm the air flow around the front wheels, while the enclosed underbody optimizes air flow to the diffusor at the rear of the car. The swan neck rear wing has been fitted with a 20 millimeter long Gurney flap and gains two further stages of adjustability.

The previous 718 Cayman GT4 Clubsport was the first series production race car to use body panels made of sustainable natural fiber composites. This material is being used even more extensively on the new GT4 RS Clubsport. In addition to the doors and the rear wing, the front lid, fenders, aerodynamic components at the front and the steering wheel consist of this material. The use of this flax-based fiber as an alternative to carbon-fiber composite can be tested in racing for a potential future use in road cars. Porsche has been using motorsport as a test bed for technology, processes and materials potentially capable of being used in road cars for more than 70 years.

The 718 Cayman GT4 RS Clubsport is equipped to compete straight out of the box. This begins with the welded-in roll cage, as well as the longitudinally-adjustable Recaro racing seat, and extends to six-point harnesses with 2023 FIA standard, all the way to the fire extinguisher system and built-in air jack system with three jacks. The new foam on the driver’s side meets the international requirements of the SRO racing series. The FT3 fuel cell can accommodate up to 115 liters (30.4 gallons) of fuel, making it suitable for endurance racing. Additionally, Porsche offers two different exhaust systems, allowing the GT4 RS Clubsport to compete at tracks with stricter noise limits. Special Fitment preparations for homologated additional headlights or openings in the front lid for quick refueling allow a quick conversion to suit nighttime endurance racing.

First Ever “Icons of Porsche” Festival Attracts Thousands of...

Better Than A Singer? Gunther Werks Porsche 993 – The Ultimate 911 Restomo...