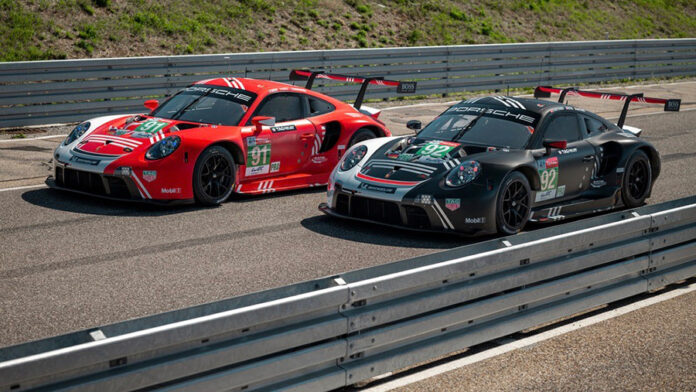 On September 19th and 20th, Porsche will take on the challenge of the Le Mans endurance classic with vehicles finished with special liveries. The two 911 RSR fielded by the Porsche GT Team tackle the hotly contested GTE-Pro class featuring red-white and black-white liveries – to commemorate the first of 19 overall victories at the 24 Hours of Le Mans 50 years ago.

With crisp lines and shapes, the special colours of the foil wrapping resemble the digital RSR that successfully contested the virtual Le Mans race on 13-14 June. The two factory cars will carry the lettering “1970” on the front lid and the roof. In that year, Britain’s Richard Attwood and Hans Herrmann from Germany clinched the first overall victory at Le Mans for the sports car manufacturer from Stuttgart at the wheel of the legendary Porsche 917. On that occasion, the vehicle fielded by Porsche KG Salzburg flew the national colours of Austria. The No. 91 Porsche 911 RSR will race with the very same red-and-white paintwork. On the No. 92 sister car, black replaces the red. Of the ten 911 racing cars to line up on the grid, eight 911 RSR are campaigned by customer teams in the GTE-Am class.

The race on the 13.626-kilometre Circuit des 24 Heures is the highlight of the World Endurance Championship (WEC) every year. Contrary to the original plan, the classic, which was held for the first time in 1923, was deferred to September due to the coronavirus pandemic. The three-month postponement means different weather and light conditions. The latest generation 911 RSR runs for the first time at the world’s greatest long-distance race. The cancellation of the important pretest throws a special challenge at the Porsche GT Team, because testing is not possible on the Circuit des 24 Heures: Most of the storied racetrack in the south of the city of 150,000 consists of public roads. Under normal conditions, hundreds of trucks and cars drive over the famous Mulsanne straight on their way from Le Mans to Tours. Treacherous ruts pose special challenges, especially in the rain.

The regular WEC drivers Gianmaria Bruni from Italy and Austria’s Richard Lietz share the wheel of the No. 91 Porsche 911 RSR. Like last year, they will receive support from Frenchman Frédéric Makowiecki. In 2018 and 2019, the experienced trio achieved second place in the GTE-Pro class. In the identical sister car sporting the starting number 92, the reigning World Endurance Champions Michael Christensen from Denmark and Kévin Estre from France are reinforced by Belgium’s Laurens Vanthoor, the defending titleholder of the IMSA WeatherTech SportsCar Championship. Two years ago, the three drivers brought home a commanding class victory at Le Mans with the 911 RSR decked out in the legendary Pink Pig design. At the 24-hour race in the northwest of France, the WEC awards double points for the individual categories. In the manufacturers’ classification, the Porsche GT Team ranks second after six of eight rounds. The reigning champions Estre/Christensen also sit second in the drivers’ category, with their team colleagues Bruni/Lietz currently in fifth place.

In the GTE-Am class, three experienced customer squads field a total of eight 2017-spec Porsche 911 RSR. In the cockpit of the No. 56 entry, last year’s Le Mans class-winning Project 1 team put their faith title defender Egidio Perfetti from Norway, the newly crowned champion of the Porsche Mobil 1 Supercup Larry ten Voorde from the Netherlands and Italy’s Matteo Cairoli. The No. 57 sister car is shared by the American Ben Keating, Felipe Fraga from Brazil and Jeroen Bleekemolen from the Netherlands. The team from Lohne in Germany’s Lower Saxony will announce the driver line-up for the No. 89 car at a later date. In the No. 86 entry, Gulf Racing relies on the all-British crew of Benjamin Barker, Michael Wainwright and Andrew Watson.

Dempsey-Proton Racing fields four Porsche 911 RSR at this year’s 24 Hours of Le Mans. The team owner Christian Ried (Germany) shares driving duties in the No. 77 vehicle with the Australian Porsche works driver Matt Campbell and Riccardo Pera from Italy. Manning the No. 88 sister car is the Porsche Young Professional Thomas Preining from Austria, America’s Dominique Bastien and Adrien de Leener from Belgium. Proton Competition campaign the No. 78 car with drivers Horst Felbermayr Jnr. from Austria, Porsche Supercup rookie champion Max van Splunteren from the Netherlands and Michele Beretta from Italy. In the 99 entry, Vutthikorn Inthraphuvasak from Thailand joins forces with the Belgian Lucas Légeret and Julien Piguet from France.

The schedule (all times CEST)