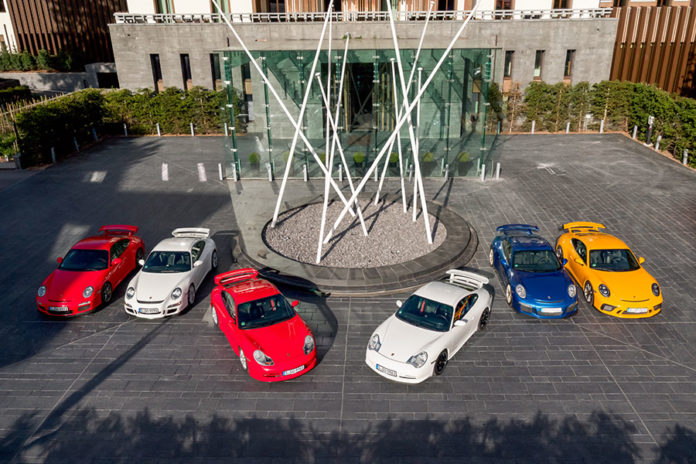 20 years ago, Porsche introduced a new 911 model the 911 GT3. Named after a class of endurance racing cars, the motorsport-derived variant focused on track performance and a particularly visceral driving experience by offering motorsport technology for the road. A high-revving naturally-aspirated flat six engine closely related to the engine used in motorsports, rear wheel drive, lightweight construction, upgraded aerodynamics and track-focused suspension and brake systems have been defining characteristics of this model throughout its 20 year history. 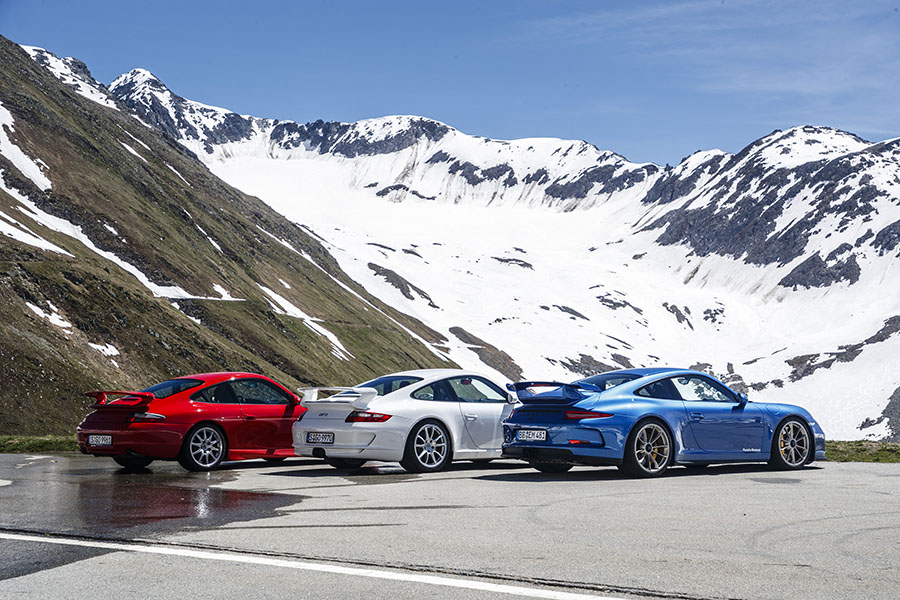 The first 911 GT3 model was introduced to the European market in 1999. It was one of the first production cars to officially lap the legendary Nürburgring-Nordschleife in less than 8 minutes, with rally legend Walter Rӧhrl going around the famous track in just 7:56.33 minutes – a sensation at the time. The car distinguished itself from rear-wheel drive 911 Carrera models through a 30 mm reduction in ride height, pronounced front fascia, visible side skirts and a fixed rear wing – all designed to reduce lift while still delivering a very efficient 0.30 drag coefficient. The angle of attack of the rear wing is adjustable for use on closed-course tracks. 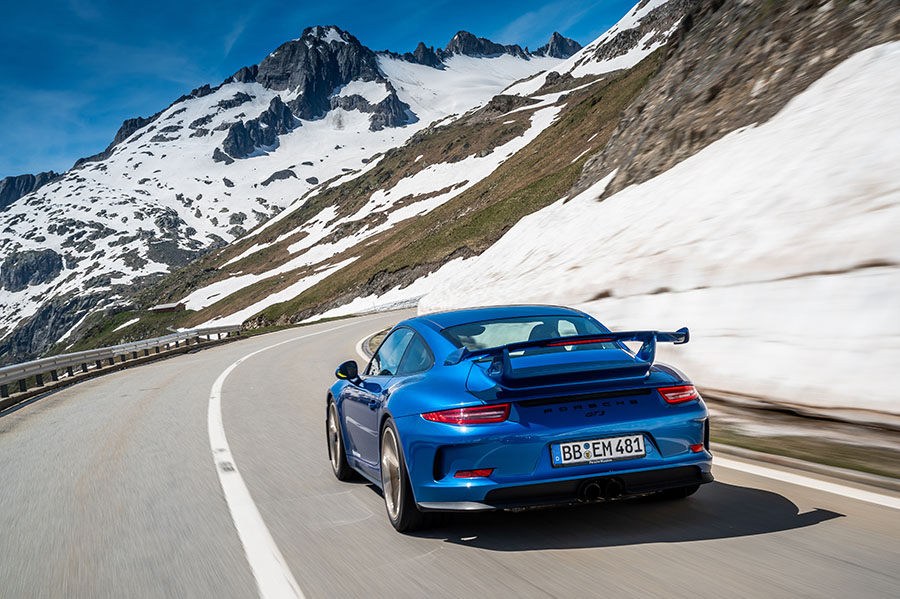 The original 911 GT3 was powered by a 265 kW (360 PS) 3.6 liter naturally-aspirated flat six engine that was derived from the Le Mans winning Porsche 911 GT1 race car and revved up to 7,800 rpm. Mated exclusively to a six-speed manual transmission carried over from the 911 GT2 (993 generation), the first 911 GT3 reached a top track speed of 187 miles per hour. The track-focused model also featured staggered 18-inch wheels and tires, larger brakes compared to the 911 Carrera, a standard limited slip differential, and an upgraded suspension that allowed for greater mechanical adjustment of anti-roll bars and suspension geometry for closed-course track setup. Taking advantage of weight savings measures such as the deletion of air-conditioning and rear seats, the 911 GT3 weighed just 2,976 lbs. (1350 kg). 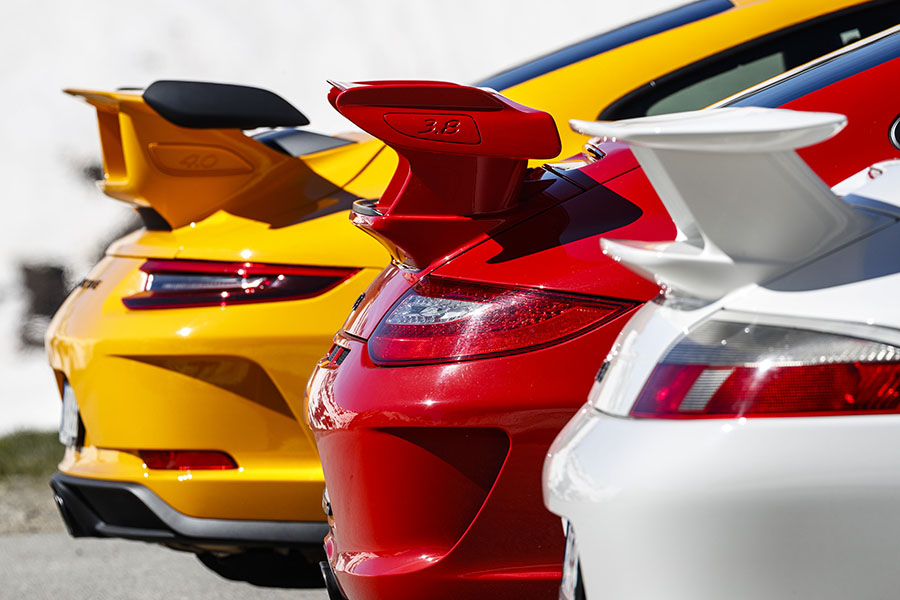 Four years later, the 911 GT3 received significant updates, and was offered in North America for the first time. Based on the facelifted 996 generation 911, horsepower grew to 381, torque rose from 273 to 285 lb-ft, and the redline climbed to 8,200 rpm. This was possible by updating the engine with longer titanium connecting rods, lighter pistons, the variable camshaft adjustment system VarioCam, and lighter intake and exhaust valves. As a result, the 2004 model year 911 GT3 accelerated from 0 to 60 miles per hour in 4.3 seconds, and achieved a top track speed of 190 miles per hour. The car remained paired to a six-speed manual transmission, albeit with modified ratios for gears five and six. In addition to restyled fasciae, a new rear wing and updated wheel design, this model featured wider front and rear tires. Underscoring the effort of the Motorsport department to save weight wherever possible, the new wheel/tire combination saved 2.2 lb in spite of the increase in size thanks to flow-formed wheel technology. Larger front brake rotors, up from 330 mm to 350 mm, and 6-piston calipers increased pad-to-rotor contact by about 40 percent. As an option, Porsche Ceramic Composite Brakes (PCCB) with carbon-ceramic brake rotors was available for the first time in the GT3, taken from the 996-generation 911 GT2. 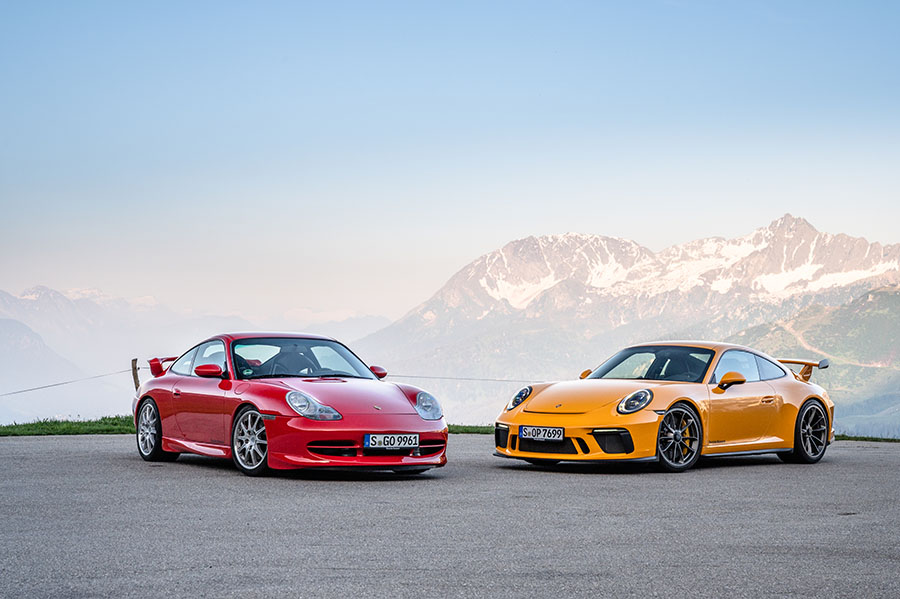 Based on the 997-generation of 911, a new 911 GT3 model was unveiled in 2006. Still powered by a 3.6 liter naturally-aspirated flat six, horsepower now crossed the 400 threshold, rising to 415. The engine was now capable of revving up to 8,400 rpm. The 2007 911 GT3 sprinted from 0 to 60 miles per hour in 4.1 seconds and reached a top track speed of 193 miles per hour. The six speed transmission offered 15 percent shorter shift throws and a reduction of ratios for gears two through six, pairing well to power delivery of the engine. To make full use of the increase in power, the suspension was enhanced with divided control arms offering greater adjustment of camber angle. Additionally, Porsche Active Suspension Management (PASM) was offered as standard for the first time on the GT3, offering the capability of electronically adjusting the dampers. Wheel diameters grew to 19-inches, the size of the standard rear cast iron brake rotors increased to 350 mm, the optional PCCB rotors grew to 380 mm at the front axle, and Ultra-High Performance tires (UHP) were mounted to further increase grip. 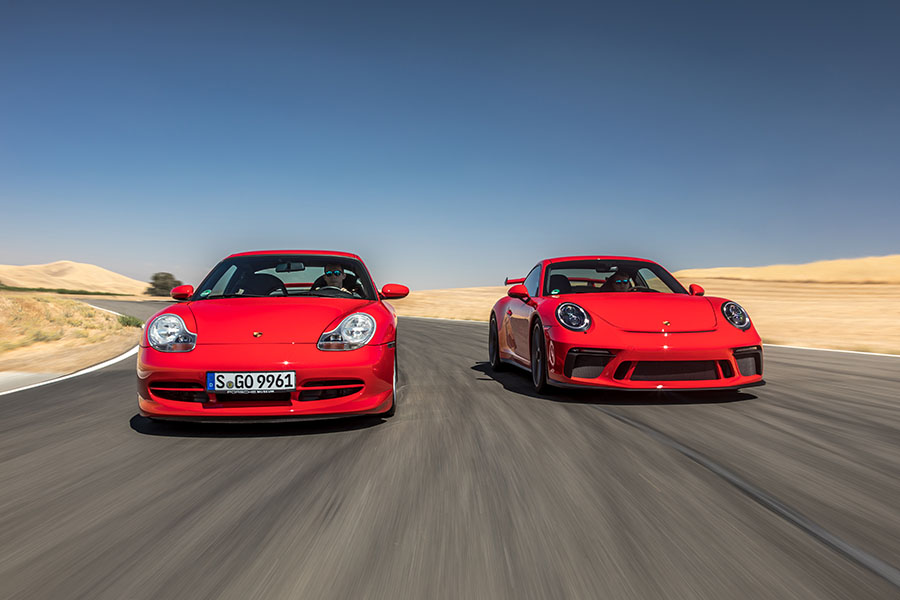 The 997 became the first 911 GT3 model to be equipped with a traction control system (TC), which complemented the standard limited slip differential by giving the driver greater control, particularly on slippery surfaces. The car was also fitted with a “SPORT” button for the first time, reducing backpressure in the exhaust and put the traction control system in a more dynamic mode. In spite of the added technology and safety equipment such as new Sport Seats with side airbags, the car tipped the scales at just 3,075 lb (1395 kg) thanks to new weight-saving aluminum doors and luggage compartment lid. The 911 GT3 of the 997 generation was characterized by new styling, with cues such as the air outlet in front of the luggage compartment lid designed to extract air from the front center radiator and increase downforce at the front axle. This was also the first model to feature center-mounted tailpipes for the exhaust. The interior offered new features such as a steering wheel, hand brake lever and gearshift lever covered with Alcantara. 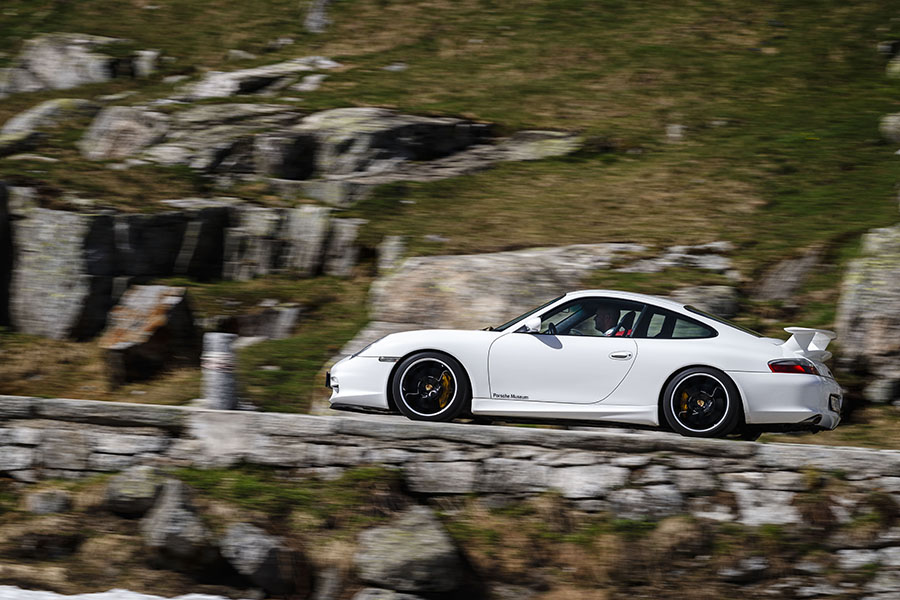 For the 2010 model year, the 911 GT3 received not only a visual update as part of the facelifted 997 generation, but also a number of significant technical changes. For the first time, the engine displacement of the race-derived flat six was no longer 3.6, but 3.8 liters. 435 horsepower and 317 lb-ft of torque propelled the new model from 0 to 60 mph in 4.0 seconds flat and on to a top track speed of 194 miles per hour while reaching engine speeds of up to 8,500 rpm. The 911 GT3 of this generation featured even more technology directly adopted from motorsport, such as the new center lock hubs for the 19-inch wheels which increased driving performance with lower rotating masses. At the same time, electronic stability control (ESC) complemented the traction control system introduced on the previous model, adding another layer of control for the driver. An optional front axle lift system was introduced for the first time, offering an additional 1.2 inches (30 mm) of ride height at the front axle to clear driveways and speed bumps. Ultimately, the most impressive trait of this 911 GT3 was its increased track performance. With the latest generation of UHP-tires and PASM calibration as well as optional dynamic engine mounts, it lapped the Nürburgring-Nordschleife in just 7 minutes and 40 seconds. 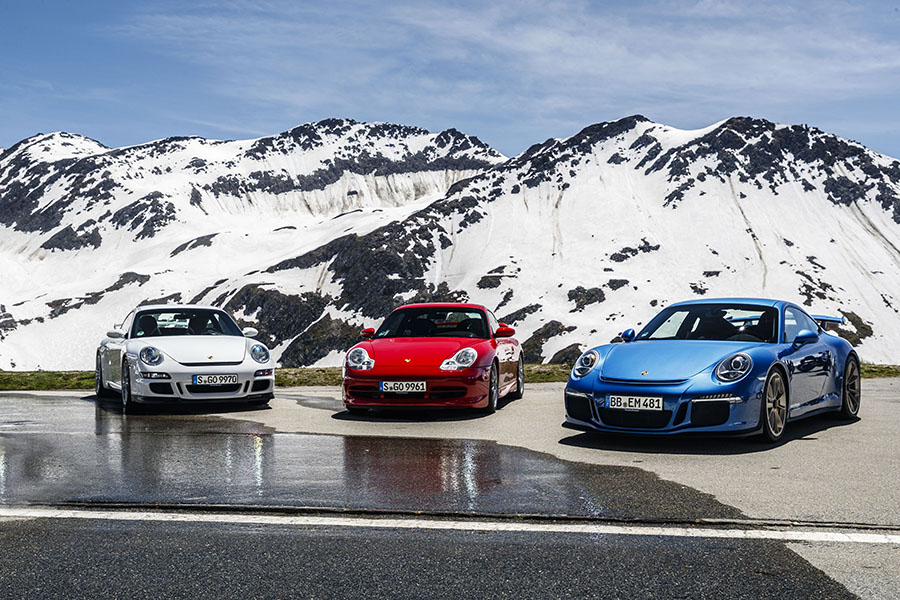 Introduced in 2013 for the 2014 model year, the 911 GT3 based on the newly introduced 991-generation adopted one of the biggest advancements in performance and technology ever seen on a road car: the seven-speed Porsche dual-clutch transmission (PDK). It had already been available on the 911 Carrera and Turbo variants of the previous generation, but was significantly modified to suit the characteristics of this race-bred model and fitted as standard. Lighter gear sets reduced the weight of the unit by about four pounds compared to the standard 911 Carrera models, and the gear ratios were shortened to suit the high-revving nature of the naturally-aspirated 475 hp 3.8 liter flat six which featured direct injection for the first time and revved to an impressive 9,000 rpm. Top track speed was 195 mph, reached in seventh gear. Due to the Launch Control feature and lightning quick shifts of less than 100 milliseconds, the 0 to 60 mph time dropped significantly to just 3.3 seconds. The track performance of this latest 911 GT3 also benefited from the new 991 platform. Track widths and body stiffness increased, PASM system advanced, and standard center-lock wheels were made of forged aluminum for the first time while increasing to 20-inch diameter. They were fitted with the latest generation of UHP-tires, and rear axle steering was added as standard for the first time on the GT3. This innovative technology, shared with the 918 Spyder and 911 Turbo, steered the rear wheels in opposite direction of the front wheels at speeds of up to 31 mph to increase agility and reduce the turning circle. Over 50 mph, the system steered the rear wheels in tandem with the front wheels to promote stability, for example during a lane change at higher speeds. The size of the cast iron brake rotors grew to 380 mm front and rear, while the optional PCCB system, now in its third generation, featured 410 mm rotors up front and 390 mm rotors at the rear. Despite the significant increase in technology, the latest 911 GT3 still proved to be a lightweight at 3,153 lbs. Equipped with all these enhancements, and clad in a new body that provided a significant increase in downforce compared to the 997-generation models, the 2014 911 GT3 completed a lap of the Nürburgring-Nordschleife in 7 minutes and 25 seconds.