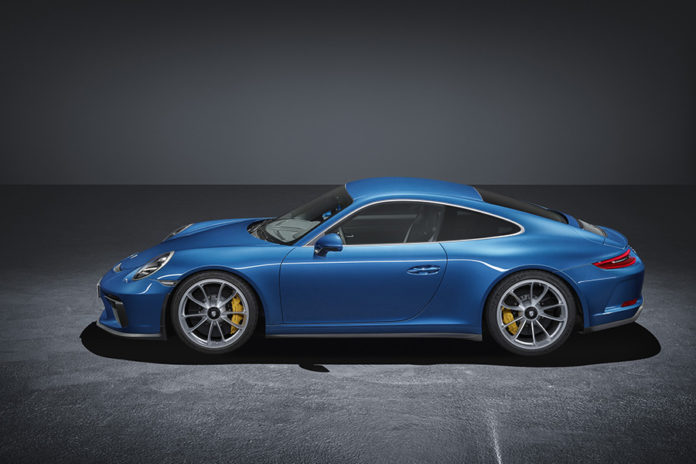 New addition to the Porsche puristic vehicles: The Porsche 911 GT3 with Touring Package will be unveiled at the 67th International Motor Show (IAA), which takes place from September 12 to 24, 2017 in Frankfurt. It is available exclusively with a manual six-gear transmission, and instead of the fixed rear wing it has a variable rear spoiler like the 911 Carrera. Beneath its understated exterior is pure motorsport technology: The four-litre naturally aspirated engine taken from motorsport reaches 368 kW (500 hp) and generates a torque of 460 Nm. In combination with optimum gear changes, the 911 GT3 with Touring Package sprints from 0 to 100 km/h in 3.9 seconds to reach a top speed of 316 km/h.

The name “Touring Package” harks back to an equipment variant of the 911 Carrera RS from model year 1973. Even then, the puristic 911 design and classic interior features were a key element. The new 911 GT3 with Touring Package adopts and modernises this concept. This variant is aimed at fans of high-quality sports cars who particularly value an understated appearance and classic driving enjoyment.

Aside from the Clubsport Package and Alcantara equipment ranges, virtually all 911 GT3 options are also available from Porsche in combination with the Touring Package. They include features such as all exterior and wheel colours, the PCCB ceramic brake, the lift system, LED headlights, all seat variants, the Chrono Package and the audio systems. 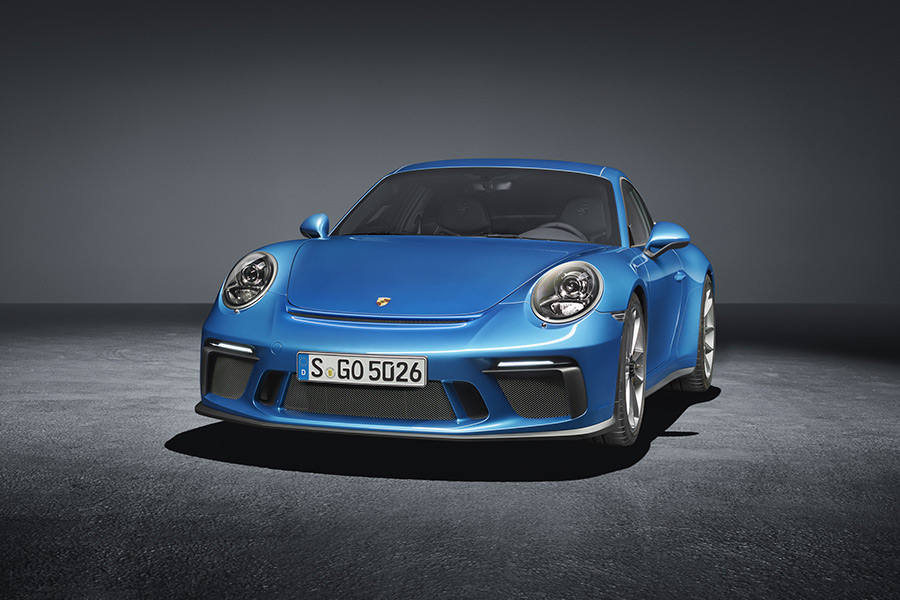 The Touring Package option is available to order now. In Germany, the 911 GT3 with Touring package costs – like the 911 GT3 – EUR 152,416 including VAT and with country-specific equipment options.

A high-performance sports car in every respect

With the exception of the rear, the body of the GT3 remains unchanged in the variant with Touring Package. This means it has large air intakes in the specially designed front end, as well as the air outlet that is typical of the 911 GT3 model, located in front of the luggage compartment lid. The front and rear lights are identical, though not dark-tinted. The appearance from the side of the vehicle is dominated by the forged alloy wheels with central locking. At the front, 245/35 ZR 20 tyres are fitted on nine-inch wheels, while at the rear 305/30 ZR 20 tyres are mounted on twelve-inch wheel rims. The tyres create a powerful impression as the body of the new variant is 44 millimetres wider at the wheel arches than the 911 Carrera. Lowering by an additional 25 millimetres further emphasises the width of the car. 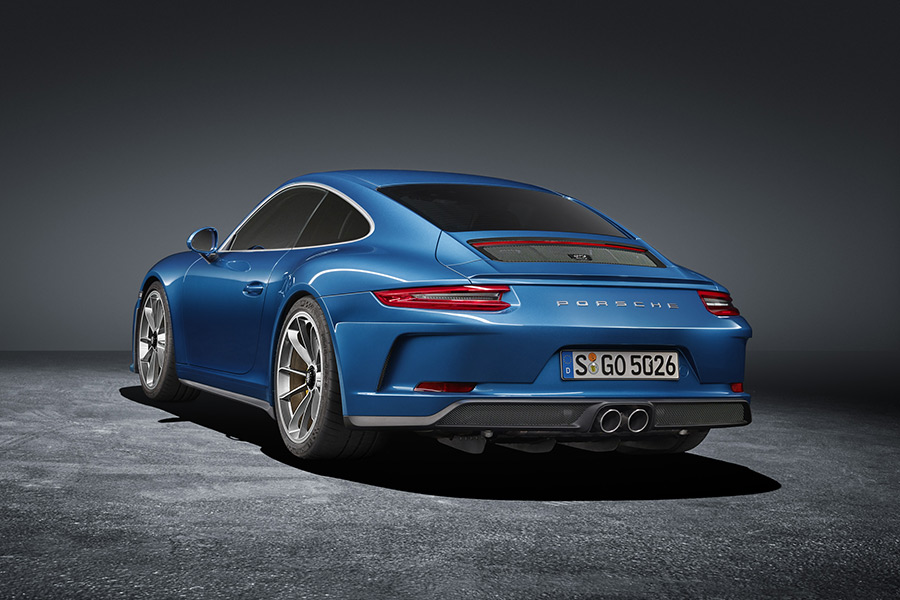 The subtle structural features are first visible at the rear end. The spoiler wing of the extending rear spoiler from the series-production 911 is equipped with an aerodynamic tear-off edge (Gurney flap) in the vehicle body colour. The specially designed rear lid grille bears the “GT3 touring” logo. Other distinguishing features include the silver-coloured side window strips, sports exhaust system tailpipes and headlight washer system covers, as well as the Porsche logo at the rear. In the “Black Exterior Touring Package” equipment option, these elements are in black, as with the 911 GT3. The front and rear lights are dark-tinted. 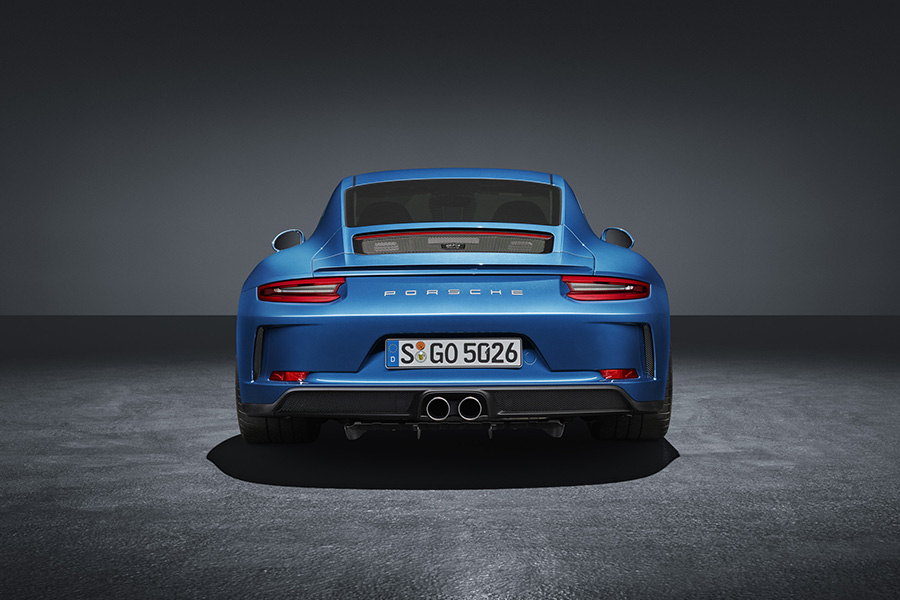 The interior creates the feel of a classic sports car with manual transmission. In line with the character of a puristic GT, fine leather is prevalent rather than Alcantara. The steering wheel rim with twelve o’clock marker, shift lever, door panel armrests, centre console storage compartment lid and interior door handles are upholstered in smooth-finish leather. The seat centres are made of black fabric. The headrests feature embossed Porsche crests and all seams in the partial leather interior are sewn in black thread. The finishing touch to the interior is the trim in black aluminium. 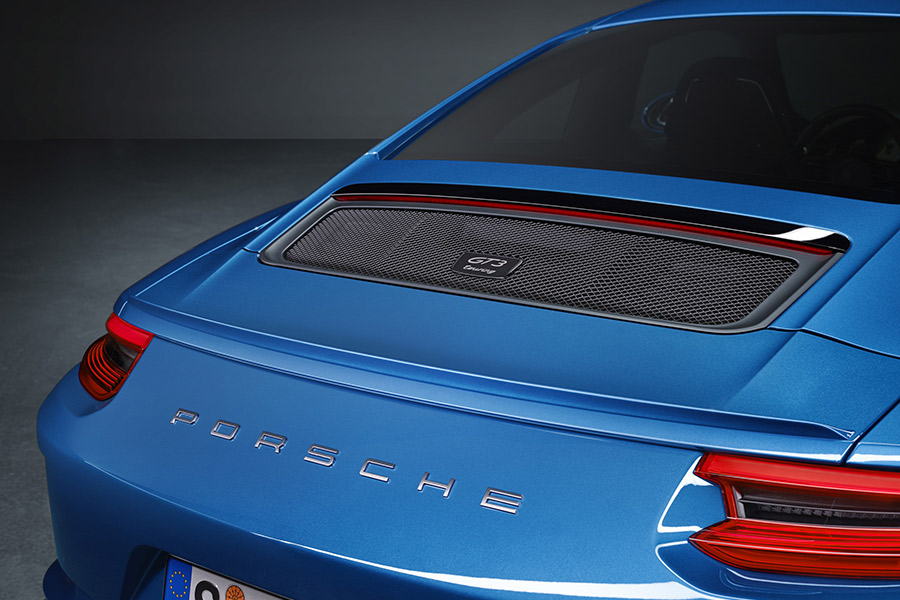 The powertrain and chassis are identical on all 911 GT3 vehicles with manual transmission, including the variant with Touring Package. The naturally aspirated six-cylinder flat engine with four-litre displacement is taken from racing cars such as the 911 RSR and 911 GT3 Cup. The machine is the most powerful naturally aspirated direct-injection engine and has the greatest displacement that Porsche has ever developed for a six-cylinder flat engine on the road. The engine is characterised by its high-speed concept. The crankshaft spins at up to 9,000 revolutions per minute, which is truly extraordinary, even for a sports car engine.

The gear ratio of the six gears is precisely tuned to the power development of the engine and offers particularly sporty shifting characteristics. An automatic intermediate acceleration function ensures an exciting sound when downshifting. This function is activated via the “Sport” button on the centre console, delivering dynamic shift processes from faster synchronisation of the gears. The GT sports manual transmission transfers the power to a mechanical rear differential lock with automatic braking (PTV). 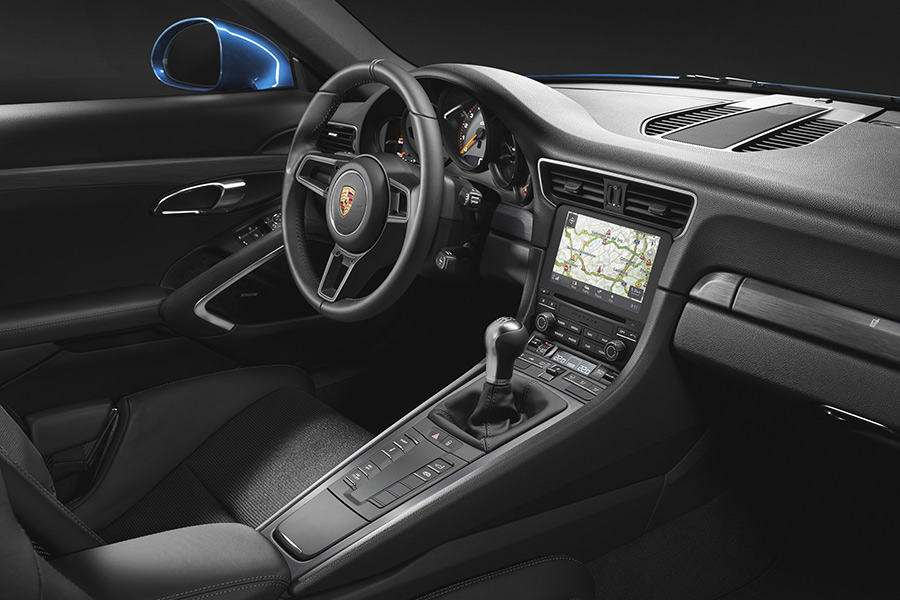 Fast on the corners, stable on the straights: Rigid chassis with rear-axle steering

The chassis of the 911 GT3 is testament to Porsche’s experience in motorsport. In addition to the basic design, which is optimised for precision, the chassis also boasts superior handling characteristics, thanks predominantly to the active rear-axle steering. Depending on the speed, it steers either in the opposite or the same direction as the front wheels, thereby improving the vehicle’s agility and stability. The size of the tyres on both axles is such that the front wheels optimally transmit steering and brake forces, while the rear wheels provide drive and traction.

In addition to Porsche Communication Management (PCM) including an online navigation module with real-time traffic information, the standard equipment of every 911 GT3 also includes the Connect Plus module and the Porsche Track Precision app. This app enables the driver to display, record and analyse detailed driving data on their smartphone.