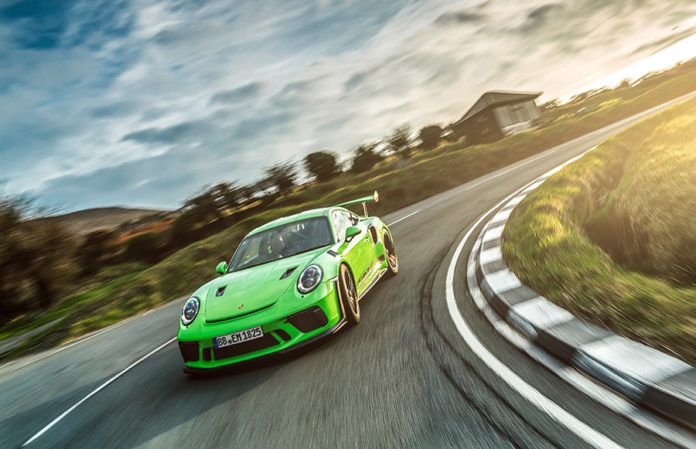 When the new Porsche 911 GT3 RS rolled out onto a brightly lit stage at the Geneva International Motor Show in March, a heavy black sheet clinging to its curves, there was a brief moment of hush before the cloak lifted and the loud beat of a carefully selected soundtrack kicked in.

Under the glare of several million LEDs, a throng of suited men and women pored over the details, cameras and gimbals vying for the close up. The viper green Porsche and all its vital statistics was fed across social feeds, blogs and websites within minutes. A new star in the GT portfolio.

The GT3 RS is about to make a proper entry

Fast forward a few weeks and the latest unveiling from Weissach is about to make a proper entry. This time, in a setting a little more befitting of a 520 hp sports car with a top speed of 312 km/h.

Cue the Isle of Man: a curious possession of the British crown in the middle of the Irish Sea that’s home to seaside towns, sweeping mountain roads – and the world-famous TT motorbike race.

Spanning just 572 km², the Isle of Man – or Mann – has been home to the world famous Tourist Trophy since 1907, each year drawing crowds of around 45,000 to watch one of the most fiercely contested events in the global racing calendar. The 60.73 km course pits man and bike against some of the most demanding roads on earth, requiring nerves of steel and an almost unimaginable amount of trust in the wheels beneath each rider. 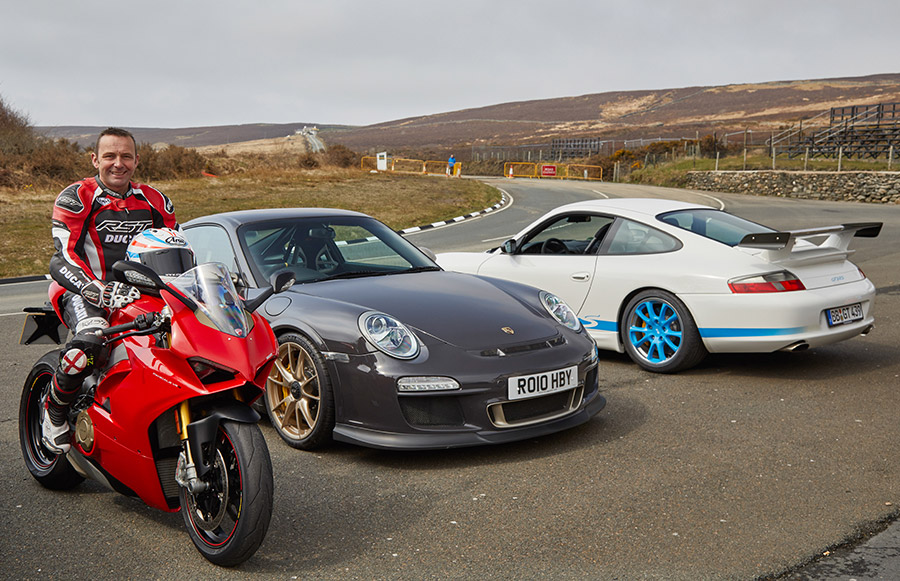 Little wonder, then, that Porsche has chosen this magical isle for the dynamic debut of the latest version of the Porsche 911 GT3 RS. The bikes’ attributes over less-than-perfect roads, and the trust they engender in their riders, are qualities shared only with the GT3 RS. Designed to provide constant, detailed feedback to the driver, this Porsche thrives on the historic TT course.

It’s a car that’s been engineered without compromise; providing poise and balance over uneven surfaces with varying levels of grip, and the enormous performance to take higher speed sections of the course in its stride. The GT3 RS is a machine so focussed that it is as close to the bikes that tackle the TT as you can get in a road car.

Representing a range of publications from around the world, just 12 journalists have been invited to experience two of the latest iterations of the GT3 RS, including one version fitted with the Weissach Pack, as well as numerous historical models from the Porsche archives. Joining the pair of 991.2 cars is a mouth-watering line-up of historic Rennsport Porsche, ranging from the direct predecessor, the 991.1, all the way back to the first RS – the car that started it all – the seminal 2.7 RS. 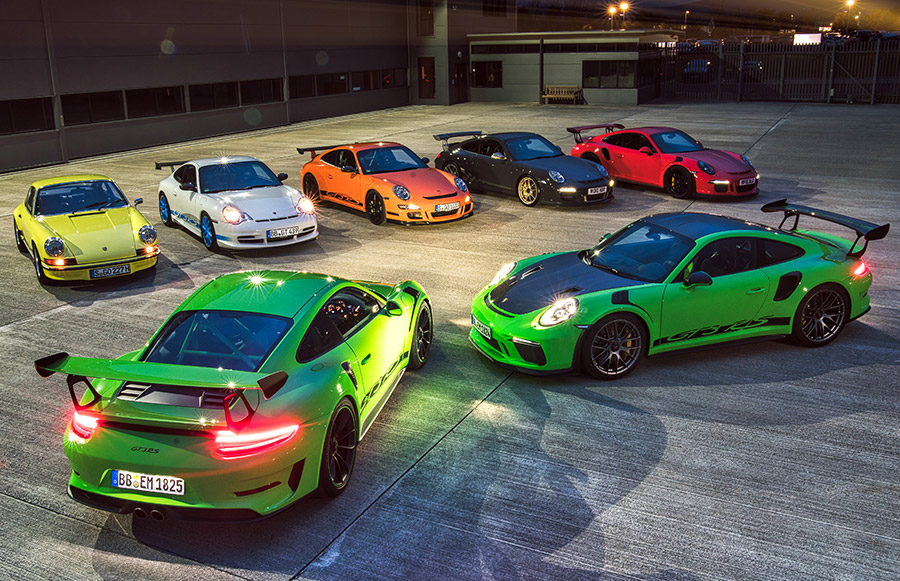 None are wrapped in cotton wool and left standing idle. Despite often horrendous weather conditions typical of an island half way between Ireland and the mountains of the British mainland, the priceless convoy makes its way out onto the TT course. While the streets and hedgerows aren’t packed today with spectators, locals stop in their tracks to offer admiring glances and thumbs-ups.

And so the journalists find themselves threading their way through famous landmarks like the Ballaugh Bridge or Parliament Square in Ramsey, the precision of the GT3 RS all the more obvious to the driver as the roads narrow and twist.

On the mountain course, the speed limit no longer applies and the proximity of the grassy verges demands concentration, confidence and respect. This is not a section of road that forgives misjudgements lightly but the GT3 RS is in its element, with the sort of mid-range punch and grip levels that the RS cars have become famous for.

Experience, on these roads, is crucial. Which is why Mark Higgins and Steve Plater are on hand. 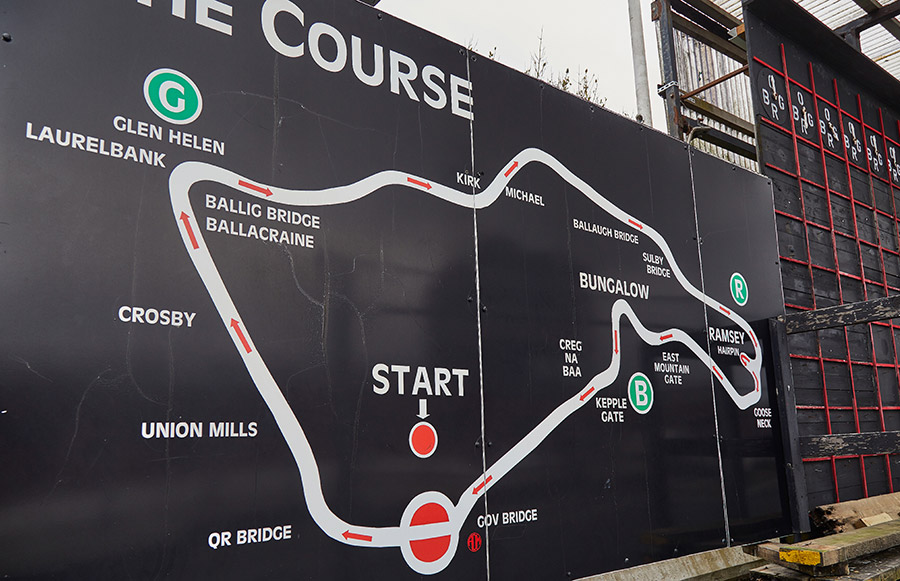 Three-time British Rally Champion, Higgins was born on the Isle of Man and in 2016, set a new TT lap record for four wheels, beating his own previous record and averaging 207.171 km/h.

Riding a Ducati Panigale V4 S sportsbike for this event, Plater has won two TT races during his career, including the Blue Riband Senior event. His sector time between Ramsey Hairpin and the Bungalow remains a record nearly a decade after he set it.

Higgins and Plater know what it takes

The men know what it takes to be fast at the TT, and the importance of the right machinery. The GT3 RS delivers. In spades.

“The Isle of Man is a motorsporting Mecca,” says Higgins. “I think a lot of people underestimate how good the roads are here. They’re undulating, they’re twisty, they’re flowing and they’re very fast. They’re the most demanding that I’ve ever driven on in my life.

“The balance [of the GT3 RS] is great. The steering feel, for me, is fantastic. It gives a lot of input and feedback to the driver but the thing that blows me away totally, for a two-wheel drive car, is its traction. It’s so planted and it’s a real pleasure to drive.” 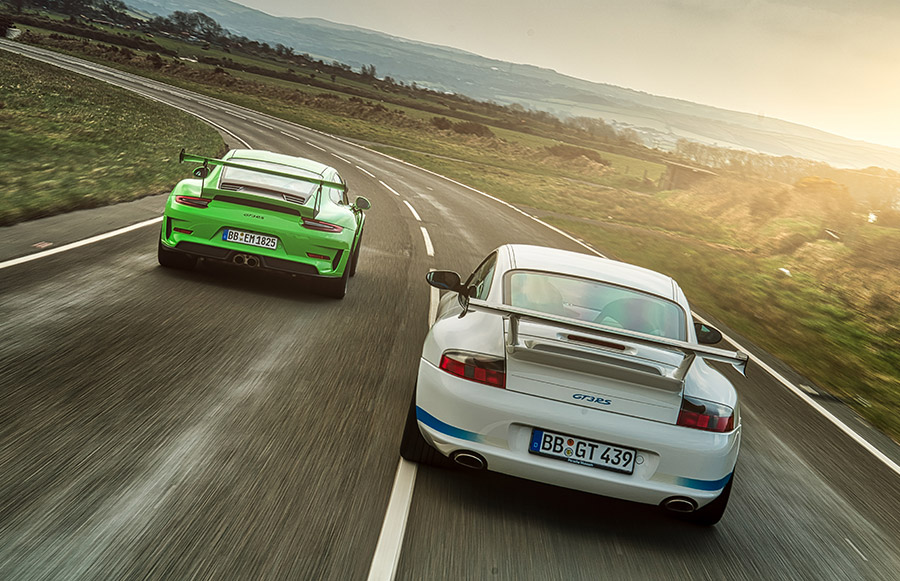 And no wonder – it’s something on which Andreas Preuninger, Director GT Model Line, and his team have been working hard. Highlights include a faster PDK shift, modifications to the rear axle steering, new spring rates at the front and rear, and 8 per cent more aero downforce.

“The streets are not exactly a race track around here – they’re very bumpy and more like a British B road – but the car is coping very well,” says Preuninger. “It is very precise, it has a lot of traction and it’s a joy to drive it on these roads.”

The devil is in the detail

For Preuninger and his team, the devil is in the detail. In the new GT3 RS there are more rose joints on the suspension compared to the previous model. In fact, only one link (for the rear axle steering) doesn’t have a rose joint now, and that’s because it works better without. There are also new forged alloys that are 100g lighter than previously. And in combination with an additional 20 hp and 10 Nm over the 991.1 GT3 RS, this 991.2 feels like a previously impossible-to-imagine step on from the last generation. 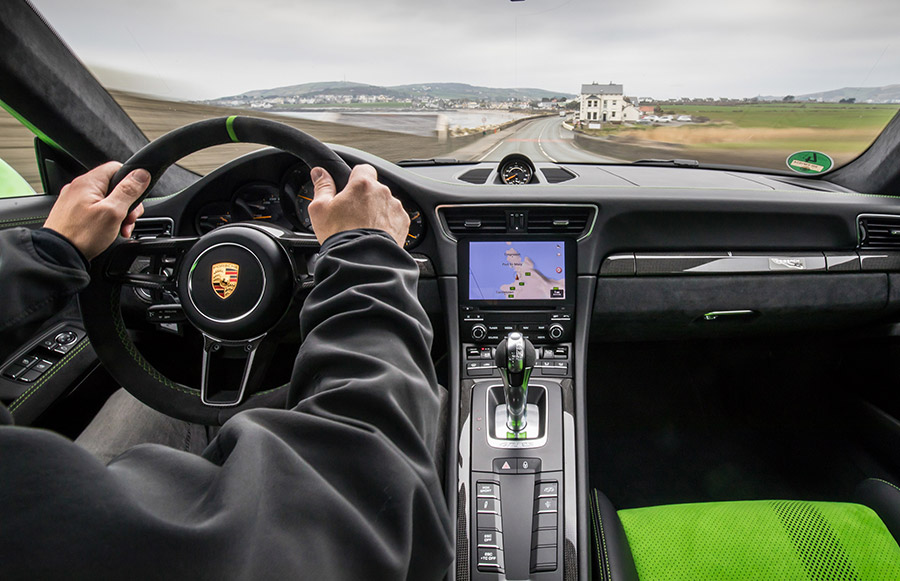 For Preuninger, there was satisfaction of a kind in the crowd’s reaction amidst the glare of Geneva’s motor show lights. But it is from the look in the eyes of the journalists coming back from driving the GT3 RS on the fast, greasy and legendarily challenging roads of the TT course, that the engineer knows that he has created a legend.

The shared basis of these two cars is the synthesis of 50 years of racing experience at Alfa Romeo.
Read more
Motorsports