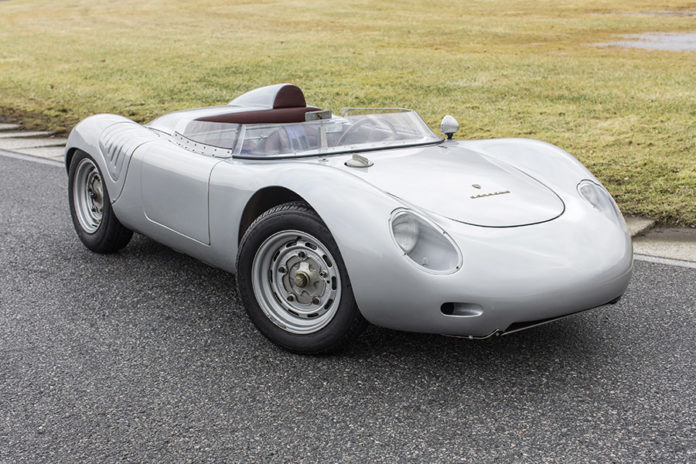 Bonhams is delighted to announce a rare and incredibly sought-after car to headline its Greenwich Concours d’Elegance Auction – a 1959 Porsche 718 RSK Spyder.

As the evolutionary successor to the legendary 550A Spyder, the 718 RSK Spyder featured more power, enhanced bodywork, superior braking and improved suspension.

Purpose built – RS stands for rennsport (sport racing) and K reflects the shape of the torsion bar suspension – the 718 RSK was extremely successful as a model and won or placed at Le Mans, Sebring and Targa Florio, the latter of which was by far the most memorable when, in 1959, Porsche took a 1-2-3 sweep with the RSK in the lead.

Boasting the powerful mid-engine placement 1½-liter 4-cam motor, these lithe and quick Porsches were dubbed “giant killers” for their prowess against the much larger engined cars from Italy.

With only 34 built, the 718 RSK is a rare Porsche. This rarity, combined with its success in competition, gorgeous looks and renowned driveability, makes it a very desirable car among collectors. Better still, this particular example, chassis no. 718-031, has a well-documented history and was extensively raced in period by legendary driver Bob Holbert at numerous SCCA and international events, including the 1959 Bahamas Speed Week. During its career, it was quite successful and regularly either won its class or won overall in the races in which it competed. Meticulously documented since purchase, it will be offered for new ownership for the first time in nearly half a century.

Consignments are now invited to go alongside this extraordinary sports-racer. Bonhams 13th annual Greenwich Concours d’Elegance Auction will be hosted on Sunday, May 31st at Greenwich, Connecticut’s lovely waterfront park. Interested sellers are encouraged to contact Bonhams immediately at motors.us@bonhams.com or 212-461-6514.

By: Bonhams | Photos Courtesy of: Bonhams/P.Litwinski