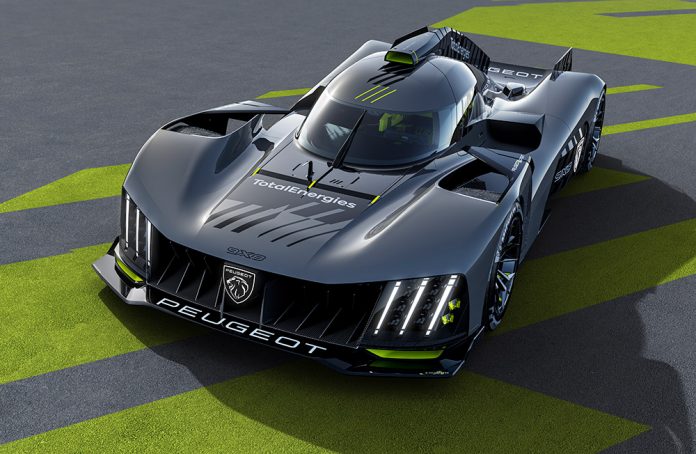 PEUGEOT has revealed details of the new 9X8, its latest-generation Hypercar which is set to make its competitive debut in the FIA World Endurance Championship (WEC) in 2022. Powered by hybrid technology and featuring all-wheel drive, the new 9X8 Hypercar showcases PEUGEOT’s Neo-Performance strategy which combines technology and sportiness in both PEUGEOT’s road and race cars. The Hypercar is a product of the latest work between PEUGEOT Sport and PEUGEOT Design, heralding a new era in racing and a new era in race car design.

The PEUGEOT 9X8 – the brand’s latest endurance racing contender – is a direct successor to the PEUGEOT 905, winner of the Le Mans 24 Hours in 1992 and 1993, and the PEUGEOT 908, which won the iconic race in 2009. The new prototype race car is poised to continue PEUGEOT’s successful history in top-level motorsport.

The 9X8 Hypercar is a brand-driven project highlighting PEUGEOT’s ‘Neo-Performance’ vision which is built around combining a premium sporting pedigree with styling excellence, efficiency and technological expertise that can be carried over to PEUGEOT’s road cars.

PEUGEOT’s Design and engineering teams have worked in collaboration with its racing division, PEUGEOT Sport, to explore new aerodynamic solutions and styling ideas to create a completely original race car. The PEUGEOT 9X8’s design and aerodynamics have been developed under the responsibility of PEUGEOT Sport Technical Director Olivier Jansonnie and the design team led by PEUGEOT Design Director Matthias Hossann. Greater flexibility, allowed by the sport’s new technical rules regarding aerodynamics, permits new thinking that favours the emergence of innovative cars, allowing for new creative processes and a break away from established procedures to produce a Hypercar for a completely new era.

The name of PEUGEOT’s new Hypercar competitor, the PEUGEOT 9X8, is inspired by a combination of the brand’s motorsport heritage and vision for the future. The “9” continues the series employed by PEUGEOT on its previous race cars, the PEUGEOT 905 (which raced from 1990 until 1993) and the 908 (2007 until 2011), both of which have become icons.

The “X” refers to the PEUGEOT Hypercar’s all-wheel drive technology and hybrid powertrain, which embodies the brand’s electrification strategy in the world of motor racing. PEUGEOT will provide a fully electrified variant across its passenger car and van range by 2025.

The “8” is common across all of PEUGEOT’s current model names, from the 208 and 2008 to the 308, 3008, 5008 and, of course, the 508. The latter has been worked on by the same engineers and designers working on the current Hypercar project, to create PEUGEOT’s first ever PEUGEOT SPORT ENGINEERED model.

The 9X8’s front and rear lighting signatures, which take the form of three claw-like strokes, are familiar PEUGEOT trademarks, while the brand’s new lion’s head logo features at the front and on the sides of the car. The Selenium Grey and contrasting Kryptonite acid green/yellow highlights, featured on both the body and inside the cockpit, echo the colour scheme chosen for the new PEUGEOT SPORT ENGINEERED line, introduced first on the 508 and 508 SW.

Hyper-efficient hybrid powertrain
Since the announcement in September 2020 of PEUGEOT’s entry into the new Le Mans Hypercar class, the factory in Versailles, near Paris, has been working tirelessly on the 9X8.

As planned, the car’s rear-mounted, 2.6-litre, bi-turbo, 500kW (680hp), 90-degree V6 – the internal-combustion engine part of the PEUGEOT HYBRID4 500kW powertrain – has been clocking up miles since April.

Meanwhile, the front-mounted 200kW motor-generator unit, seven-speed sequential gearbox and battery are in the process of being assembled, keeping with the bench-testing validation schedule. The powerful, technologically-sophisticated, high-voltage (900 volts), high-density battery is being co-developed by PEUGEOT Sport and Saft, a subsidiary of TotalEnergies.

Le Mans, a laboratory for PEUGEOT
In addition to its aerodynamic, mechanical and electronic efficiency, the new car will serve to showcase PEUGEOT’s extensive engineering expertise in the world of endurance racing. The Le Mans 24 Hours is a notoriously demanding event, and with the cars covering over 3,300 miles, they come close to the distance seen in a full season of Formula 1.

Porsche’s Seven Weeks of Preparation for 14 Hours of Racing at the WEC Fin...