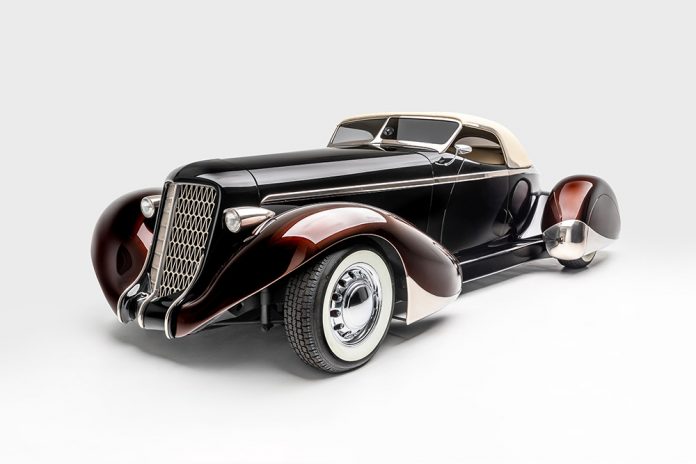 The Petersen Automotive Museum, with Coker Tire as the presenting sponsor of the showcase, has announced it will host a curated display of cars from James Hetfield’s personal collection at The Quail: A Motorsports Gathering on Friday, August 13. The selection of custom American vehicles comes out of the “Reclaimed Rust” exhibit at the Petersen, which combines the Metallica star’s expressive tastes in both music and cars.

“The Petersen is excited to showcase this collection of beautiful custom vehicles at one of the most renowned automotive events in the world,” said Petersen Automotive Museum Executive Director Terry L. Karges. “Our exhibit ‘Reclaimed Rust’ is a love letter to legendary rocker James Hetfield’s two most prominent forms of expression and we are delighted to expand its reach to Monterey.”

“We’re proud to help support the Petersen Automotive Museum bring rock legend James Hetfield’s amazing collection to the lawns of Quail Lodge & Golf Club this year,” said Wade Kawasaki, Chief Executive Officer of Legendary Companies – Coker Tire’s parent company. “The Quail is one of the pinnacle events of Monterey Car Week and this collection of extraordinary customs is sure to be a crowd-pleaser.”

The display will be located at the “Coker Tires Presents Reclaimed Rust: The James Hetfield Collection on Loan from the Petersen Museum” exhibit, adjacent to the western entrance of The Quail.

“Reclaimed Rust,” which is on display at the Petersen Automotive Museum until November 7, 2021, features 10 of Hetfield’s personalized hot rods complemented by guitars, photos and other memorabilia from his collection that celebrate the Metallica frontman’s passions. Hetfield is a lifelong car enthusiast and views his collection as a form of expression to convey his creativity. Hetfield’s vehicles assert both a reverence for history and a disregard for convention, standing collectively as a testament to the musician’s distinctive personality and artistic energy.