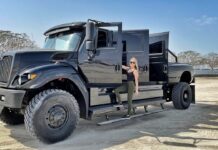 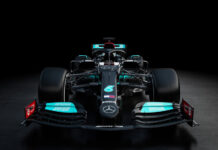 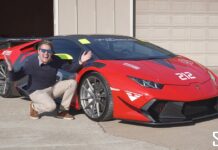 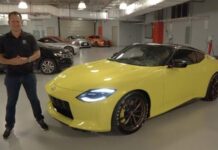 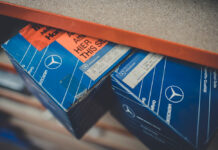 This is it, my SLS AMG Black Series is going blue! It’s paintwork time at Chartwell as the body and panels are transformed into the new colour of Mercedes designo Mystic Blue. There’s no turning back now as the car changes to my choice of colour to be a permanent member of the Shmeemobile garage, so let’s see it come to life.

For the journey up, the car of choice this time around is my Ferrari GTC4Lusso which always means some delight from the V12 along the way. The car had a huge run last month around Europe filming videos in place of the Geneva motorshow and is now due both a service and being changed back to summer tyres.

On arrival it’s straight to the body panels that have been removed from the car which are sanded down and prepped for the paintwork to being. However, simultaneously the main body of the car has already turned blue and gives a perfect first impression for how this is going to look. Not only that, but I also have a host of new parts to fit including the carbon fibre door sills, carbon fibre mirror caps and the replacement silver badges to shine out against the navy blue paintwork.

With regards to the decision to paint the car in my own colour, Mystic Blue, no doubt there are plenty of questions. Naturally, I spent a lot of time considering the decision and the various options; from wrapping to a Topaz Skin. The gut instinct screams “don’t respray it because you’ll destroy the value”, however , I did not buy this car to be a collector’s garage queen! I will drive it to Vmax top speed, I will do laps of the Nurburgring and track days, it’ll be on show stands, I will fly it around the world, and I will drive it with plenty of miles. As such, from a ‘value’ perspective, it’s largely irrelevant as I have absolutely no plans to sell it and will make the story of the car my own.

A wrap was never going to work, typically those last 2-3 years before they start peeling away and looking poor, while never having a paint quality finish from the start. Topaz Skin was heavily considered like on my AMG G63 and in many cases would be the right option, however there’s no knowing how that holds up in 10 years, or how it could work with PPF on top – which is absolutely compulsory for the amount and type of usage I have planned. What would even happen with rally stickers over the top of the Skin is totally unknown and plenty of other queries. Ultimately why pay for what is technically a respray, to maybe have to do it again down the line? The decision here is a full respray paint job, and then Topaz PPF on top to protect it in future.

The good news though, is there are absolutely no regrets, the colour is absolutely perfect and believe me, when it’s all done and revealed it is going to look absolutely the part!

IMPORTANT NOTE: This video was filmed prior to the introduction of lockdown guidelines in UK as is evident by the amount of traffic on the roads. The actions and behaviour you see may appear unusual due to new border restrictions, self distancing, and other health and safety measures and recommendations that have since been put in place. It is published to entertain and distract from the gloominess of the current situation. Best wishes go out to everybody who is affected by this global crisis and thoughts are always with you, especially during these trying times. Thank you for your support.