For three early morning hours of overnight darkness on the first day of November, Grand Central Terminal was empty of the usual commuters, workers and tourists. Instead, during those three hours, the New York City landmark admitted just six special gue … 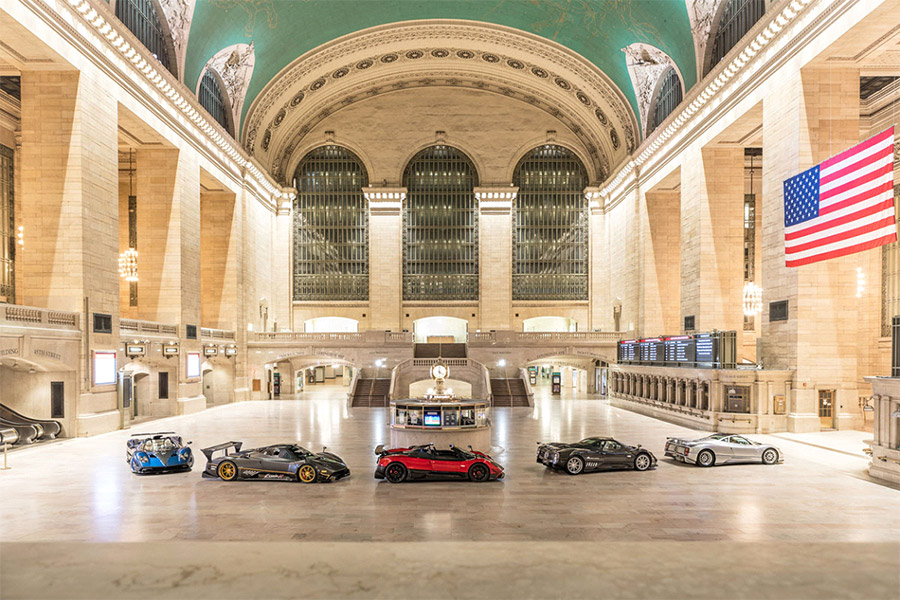 For three early morning hours of overnight darkness on the first day of November, Grand Central Terminal was empty of the usual commuters, workers and tourists. Instead, during those three hours, the New York City landmark admitted just six special guests. For those three hours, the six guests of honor posed for photos in the unusual stillness of one of the country’s busiest terminals.

Pagani Automobili has only been in business for twenty years, but it has been an impactful twenty years. A formula of meticulous design, radical styling, innovative materials, Mercedes AMG 12-cylinder power, Pirelli tires, and low production hypercar rarity exerts an irresistible magnetic force on cameras and cell phones at any motor show or concours. Social media accounts hunt Pagani cars like National Geographic photographers track animals in their natural habitats. 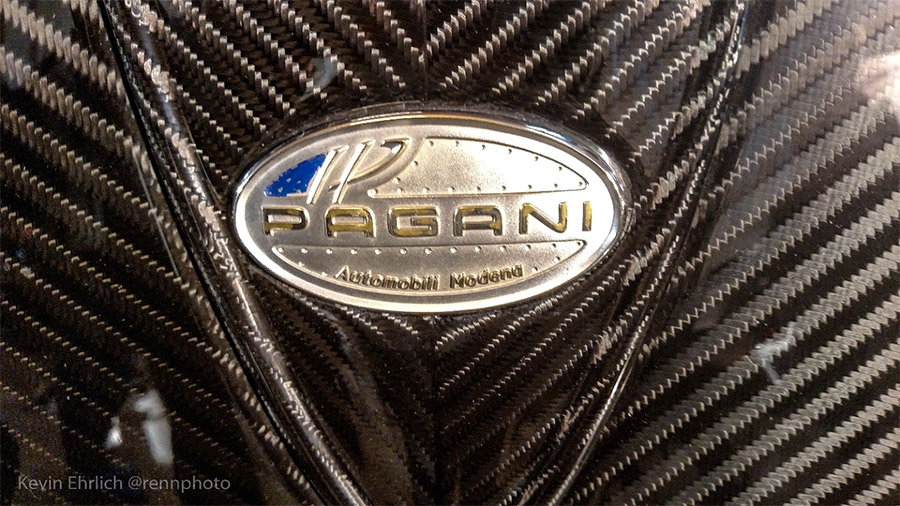 To celebrate twenty years of corporate history, Pagani and tire supplier Pirelli arranged a public display in Vanderbilt Hall within Grand Central Terminal for only four days called “The Story of a Dream.” The stop in New York was preceded by stops in Hong Kong, Italy, and two stops in England at the Goodwood Festival of Speed and the Salon Privé concours as part of a celebratory world tour. 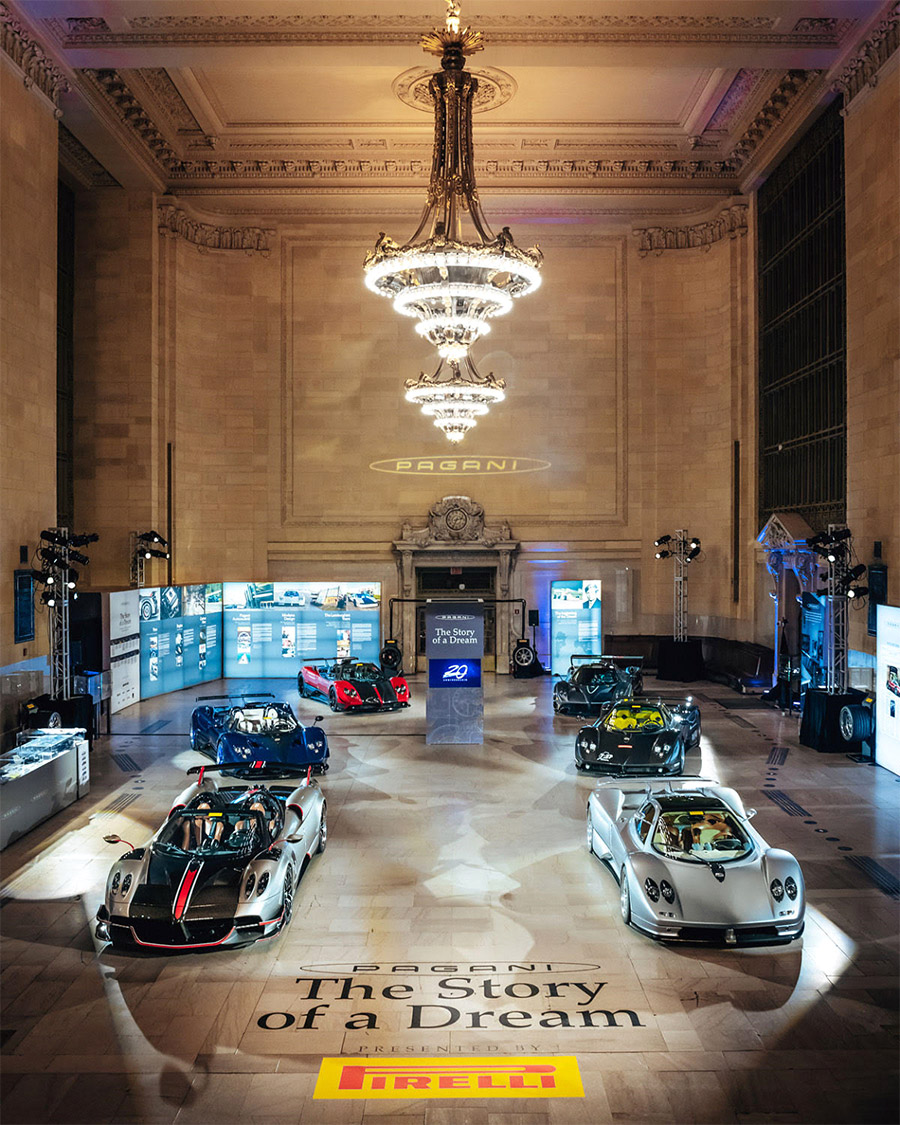 Vanderbilt Hall was once the main waiting room for the train station when it was built in 1913. Just off of the entrance at East 42nd and Park Avenue, its six thousand square feet boasts five stunning beaux arts chandeliers. Each is adorned with 132 bulbs on four tiers, and provided a classic yet dramatic venue for six special Pagani variants – five Zondas and one Huayra. 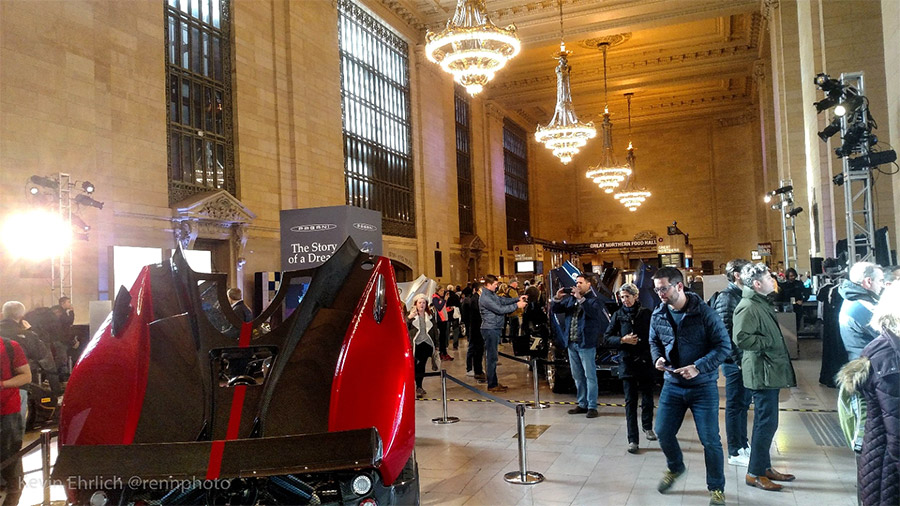 Only 140 Zondas were produced in total. Seeing one is rare but five gathered in one place in public outside of the Pagani factory is extraordinary, let alone the specific five on display in New York. The Zonda is particularly unusual in the United States as no Zonda was ever “officially” sold in the country. The Zonda itself is a starting point platform which means the 140 produced are not all the same. Over time, variants sprouted their own identities and distinctive nuances. The celebration in Grand Central illustrated the evolution and novelty with a five Zonda timeline.

The Zonda takes its name from the hot and dry Argentinian wind, a nod to the homeland of founder Horacio Pagani who began life in rural Argentina before finding his way to Italy as a young man. A relentless spirit, Pagani tinkered with go-karts and designed his own race car in Argentina. In 1982, he left Argentina, knocked on doors in Italy, and ended up at Lamborghini. It was a perilous time at Lamborghini. He started humble, literally sweeping floors. He worked in the body shop which also introduced him to composites and carbon fiber. He quickly progressed and apparently impressed the Italians who tasked him to design the 25th anniversary version of the Countach.

Splitting with Lamborghini in 1991 after they balked at Pagani’s desire to move forward with carbon fiber and composite technology, he started his own firm and became an expert supplier of carbon fiber parts to clients such as the Ferrari Formula One team. He set out to design his own car, now armed with knowledge and experience at the cutting edge of composite design and construction.

Countryman and legendary racer Juan Manuel Fangio made introductions that resulted in Mercedes AMG twelve-cylinder power becoming part of the Pagani formula. Mercedes AMG engines for Pagani are assembled only a few steps away from the main engine assembly line in AMG’s Affalterbach, Germany facility. The tradition of “one man, one engine” proudly continues as craftsman such as Michael Kübler fit parts for each twelve-cylinder engine together by hand before sending them to Italy for duty in a new Pagani. If you doubt the passion and ownership, follow Herr Kübler’s social media feeds (@f1mike28) and you’ll see him posting and following Pagani cars and their owners around the globe.

In 1999, the Zonda C12 made its debut at the Geneva Motorshow. It had taken seven years, but the C12 was a sensation (dubbed C12 in honor of Pagani’s wife Christine and the twelve-cylinder engine). The anchor to the Grand Central display was the very first production Pagani Zonda C12 car – chassis 001. Displayed in its original silver color (an homage to Mercedes race cars), the Zonda C12 basked in the attention after an extensive restoration. The return to the spotlight required a material effort, as this very first Zonda was used for crash testing after its Geneva Motorshow duty had concluded.

In 2007, Pagani attacked the Nürburgring with the Zonda F, named as a tribute to Juan Manuel Fangio. The exact car that claimed the track record on the Nordschliefe soaked up its own share of eyeballs under the Grand Central Terminal chandeliers. Curious Instagrammers took note of the 7:27 lap time numerals set against an outline of the Nürburgring track marked in white on the car’s nose and rear deck. The Zonda F’s purposeful black carbon fiber bodywork visibly illustrated the no compromises lightweight approach required to set the fastest road car lap time on the mighty 12.9 mile Nürburgring Nordschliefe.

As if a Nürburgring record wasn’t enough, Pagani created ten track day specials in 2009 called the Zonda R. The lack of road car constraints permitted a more focused expression of the Zonda platform. Aerospace and Formula One technology was infused into the Zonda platform. Aerodynamic tweaks such as the giant wing and tunnels atop and beneath the rear bodywork make the Zonda R’s intentions known. The result was a model Pagani calls “the most intense interpretation of the Zonda.” Sitting in the corner of Vanderbilt Hall in bare black carbon fiber bodywork with gold wheels, it was easy to visualize the Zonda R at speed on the Nürburgring Nordschliefe en route to recording a lap time of 6:47 – a seemingly impossible 40 second improvement over the mark set by the sister Zonda F. 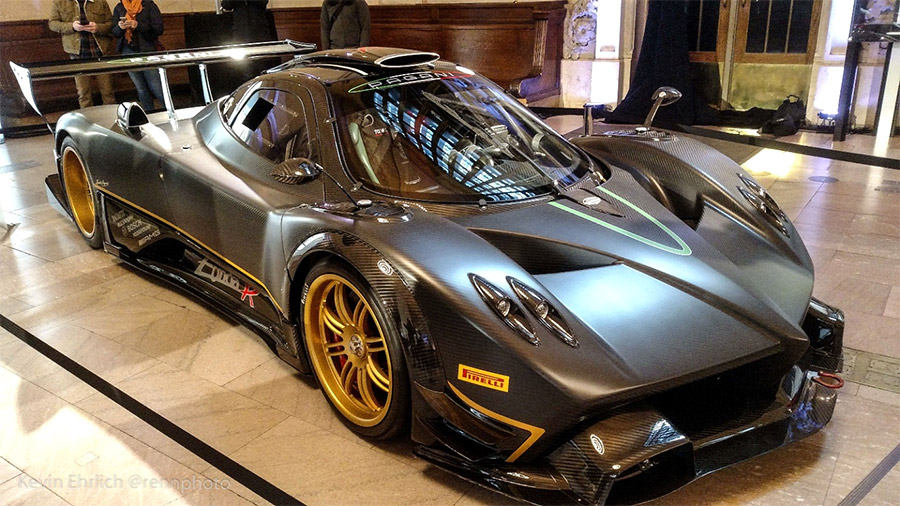 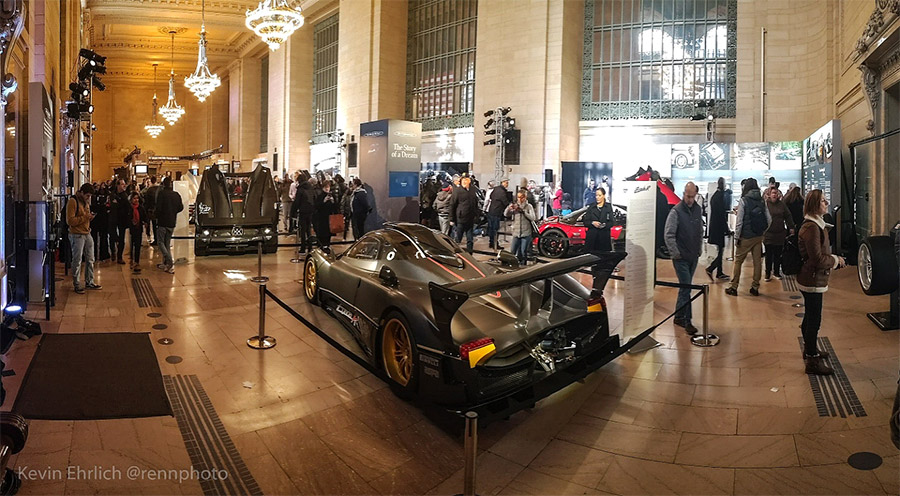 The red 2009 Zonda Cinque nearby continued the Zonda story, but in a different direction. Preserving many of the performance features from the Zonda R, the open-topped Cinque was built at the request of a Hong Kong customer. The removable roof was stowed elsewhere for the display. Only five were built (thus the “Cinque” name) and each incorporated cutting edge material design developed by Pagani that mixed titanium into the carbon fiber weave. The combination continued the relentless focus on composite construction launched with the original Zonda C12, sitting mere yards away in the Grand Central gathering. 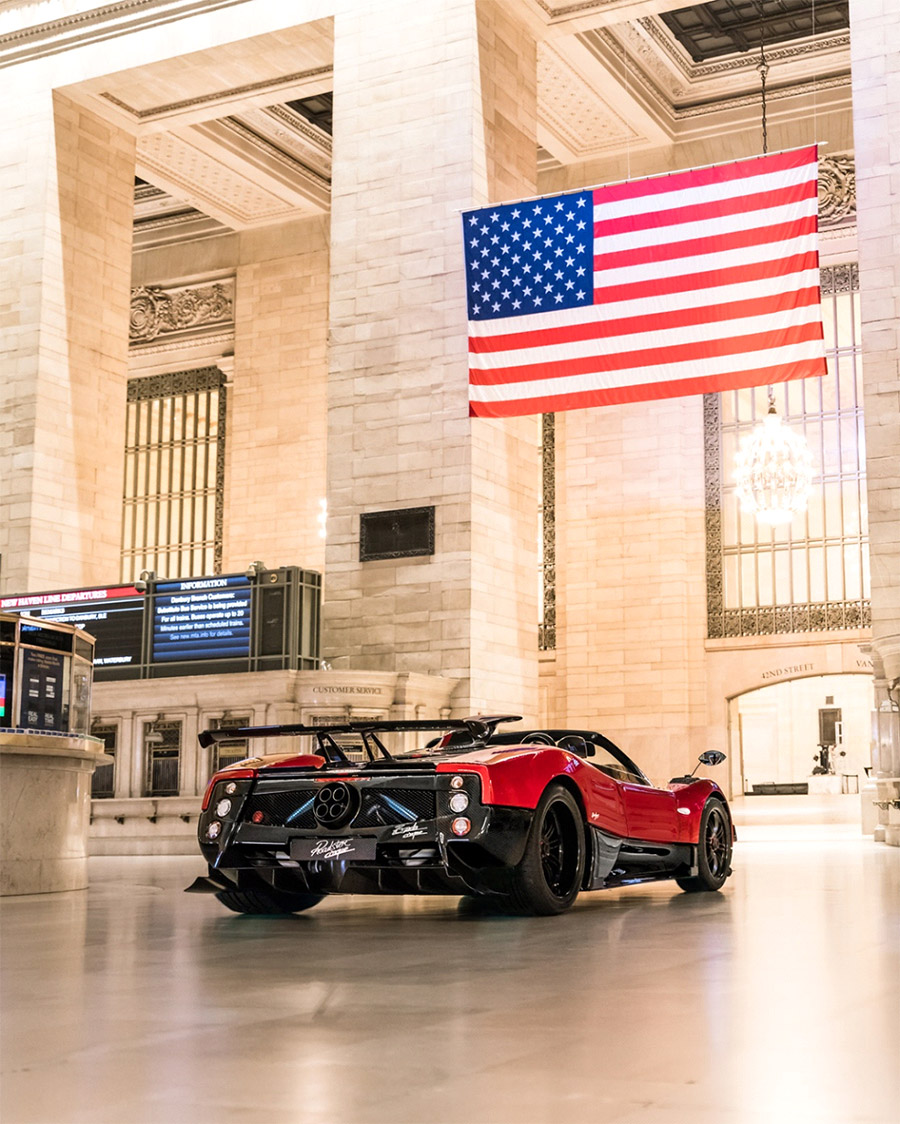 For those who viewed a production run of five as overly numerous, the HP Barchetta parked nearby may have been the ticket. The Zonda HP Barchetta was designed by Horacio Pagani to his own specifications rather than those of a customer and only three were built.

“Barchetta” is Italian for “little boat” and is a term typically used to describe two-seat open-topped sportscars. In the case of the Zonda HP Barchetta, there is no roof at all – removable or otherwise – in order to fully immerse driver and navigator in the full motoring experience. The bright blue carbon fiber bodywork with black accents complemented an interior of white leather and blue tartan accents. A giant scoop mounted centrally behind the seats feeds air to the engine compartment, a design feature that hinted at the performance potential. 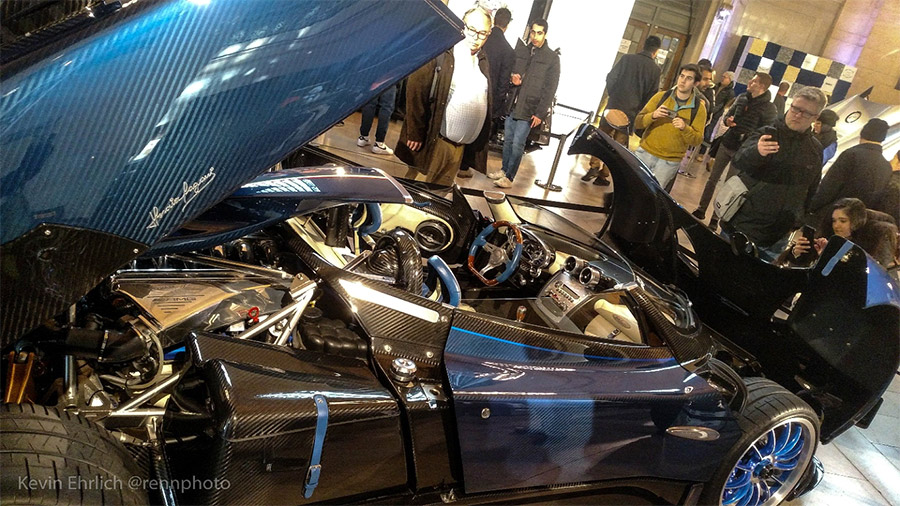 The Barchetta HP made its debut at the 2018 Goodwood Festival of Speed after “ordinary” Zonda production was supposed to have concluded. The highly bespoke nature of the car was evident in the price tag, reportedly something in the neighborhood of €15 million (USD$17 million).

When Zonda production ceased, it gave way to the Huayra. Named after Huayra-tata, the god of wind in indigenous South American nations, the Huayra made its debut in 2011. A silver and black Huayra Roadster BC with red accents was on hand in Vanderbilt Hall to close out the timeline.

As with the Zonda, Pagani has built variants of the Huayra over time. The Huayra Roadster BC was officially launched in Monterey in August 2019 and was the extension of the Huayra BC coupe. The “BC” moniker is an homage to Benny Caiola, friend of Horacio, extensive car collector and first Pagani customer. Only 20 units of the BC coupe and 40 units of the BC roadster will be produced. 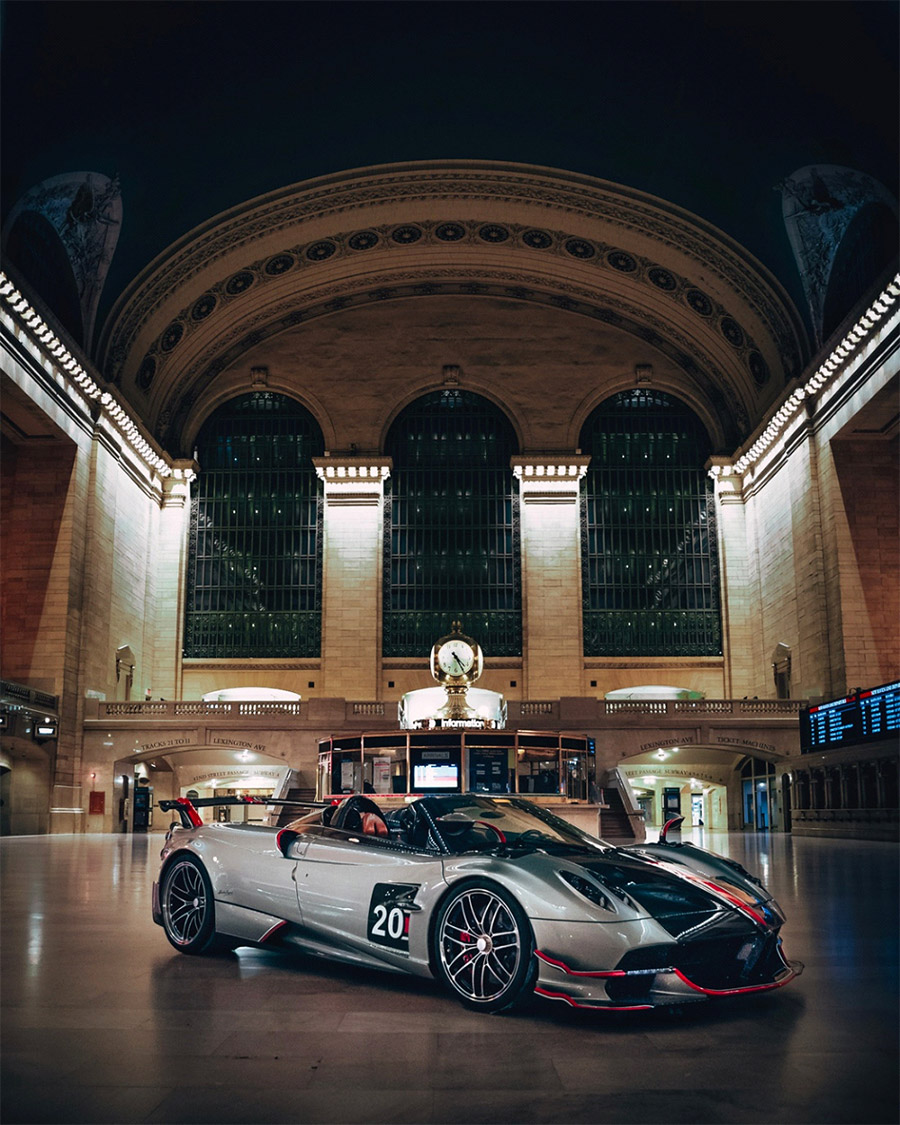 The BC versions of the Huayra are performance focused, lighter and loaded with more aerodynamic tweaks than the “standard” Huayra. The Roadster BC is scheduled to be the final Huayra produced before Pagani moves to their next chapter but if history is any indication, customers may be able to convince Pagani to extend the Huayra’s life in personalized commissions. Maximum Pagani production is roughly 45 units per year. All 40 planned Roadster BC units were sold before production even started. Pagani’s order books are full for the next few years. 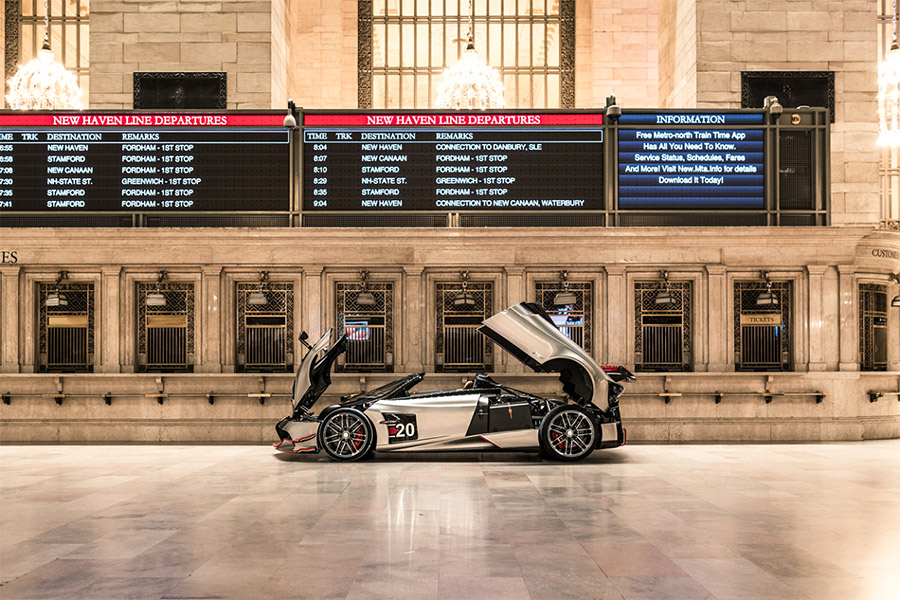 Work on the Huayra’s successor is already underway. Targeted for 2022, the next evolution of Pagani is codenamed C10. In an era where 12-cylinder engines are becoming more and more scarce, the C10 will feature a newly designed twin-turbo Mercedes AMG 12-cylinder engine.
As if the exceptionally rare assembly of six Pagani in Vanderbilt Hall wasn’t enough, observant visitors took note of the simple glass display case along the wall that featured a notebook and a model car. If the Pagani dream could be traced back to its origins, these gems would be the pot of gold at the end of the rainbow.

A spiral notebook with graph paper showed three pencil drawings Horacio Pagani sketched as a young man. Positioned in front of the notebook was a wood and resin scale model that Horacio Pagani built when he was twelve years old in 1967. The model was described on the accompanying plaque as the “model that Horacio cares about the most.” Called project MARA based on the initials of his parents, the sleek, aerodynamic model was the pivot point that pushed young Horacio to think about moving to Italy. It doesn’t take much imagination to see styling cues of the Lamborghini Countach and future Pagani cars in the model.

Pagani credits Leonardo da Vinci as a great influence, particularly due to the mix of art and engineering. The inspiration and obsessive attention to detail is a large part of what sets Pagani apart. Arguably, Pagani’s creations required automobile terminology to evolve, creating the term “hypercar” to describe cars where the prior “supercar” description wasn’t quite adequate. 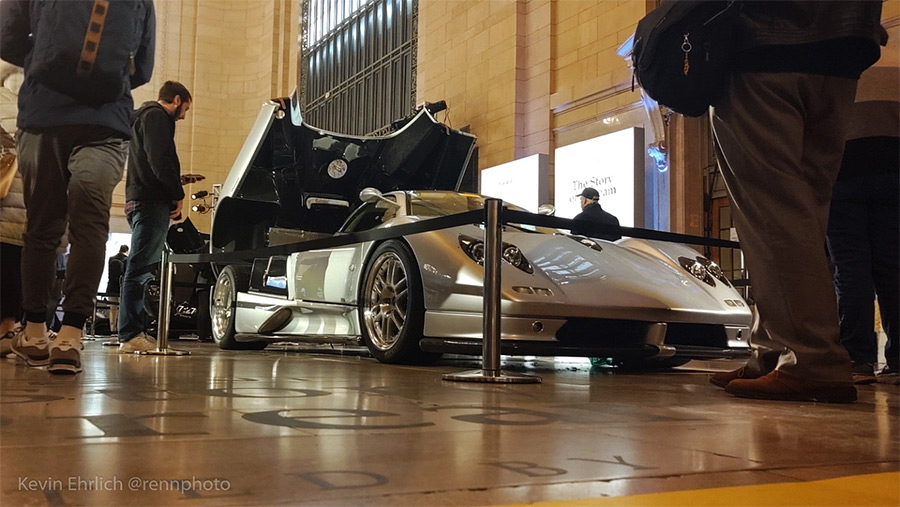 With multi million dollars of exotic hardware parked nearby in a venue that is absolutely iconic for New York and transportation hubs, a boy’s notebook and scale model are priceless and best illustrated “The Story of a Dream.”