The New Ford GT – A Race Car for the Road 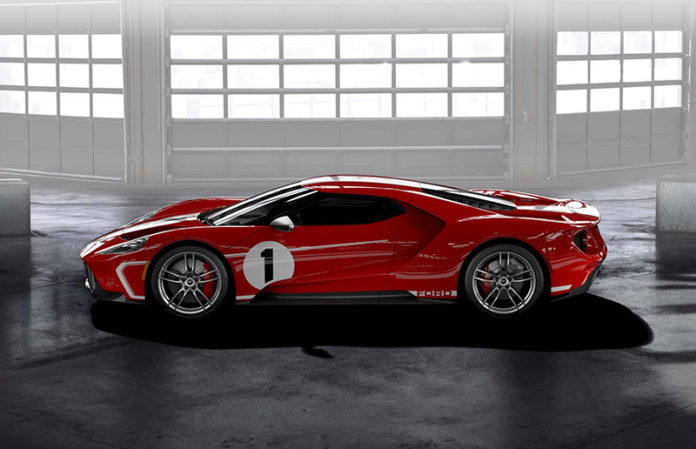 Many marques over the years have advertised their road cars as bred by the race track or related to their racing cousins. Fewer have a product in their showrooms that so closely resembles the race car version as the third incarnation of the Ford GT.

Save for some interior amenities and a detuned engine (yes, the road car has more ponies than the race car due to racing regulatory requirements to keep costs in check), an owner of a new 2017 Ford GT could apply numbers to the flanks and head to the track. The road car and the race car were both developed together in parallel. 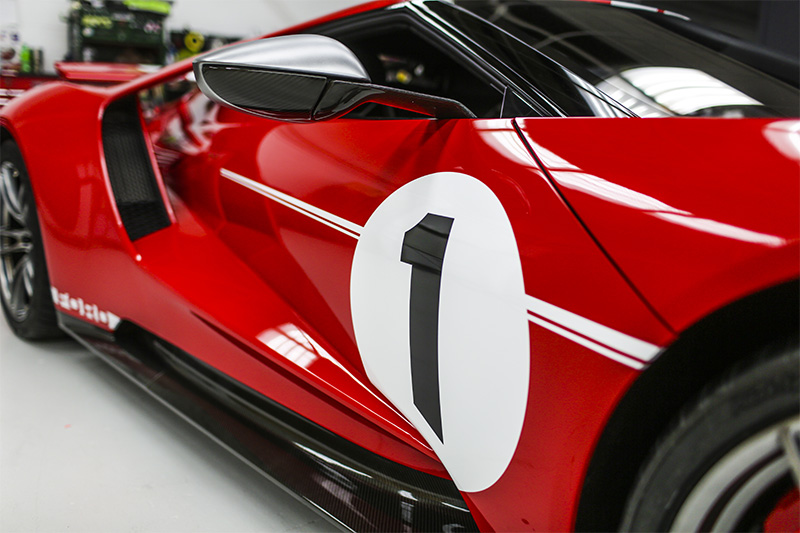 Production is limited to 250 per year and Ford wanted to ensure that their new toys got into the hands of people with passion and people who would drive and expose their cars to maximize publicity and impact. Ford developed an application process to find out more about prospective owners, how they related to the marque, and how they intended to use the car. Applicants even were asked to submit a one-minute video as well. 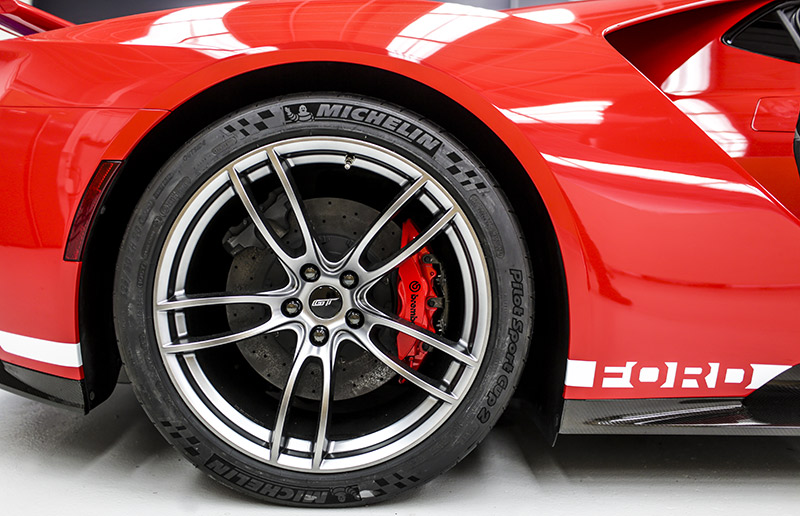 Successful customers have recently begun taking delivery of their new cars. Ford even assigns a concierge and allocates a four-hour block of time for the process. Part of the objective is to make sure that the delivery covers all of the substantive elements of the new car in terms of controls, care, and maintenance. The second part of the objective is to let the delivery be as much of an “event” as the new owner desires. Ford is happy to do a low-key delivery but also make a delivery to a huge party at a dealership, a barbeque with a new owner and their friends, or even directly at a race track. Presumably there are unwritten limits, but Ford will try to accommodate if logistics permit. 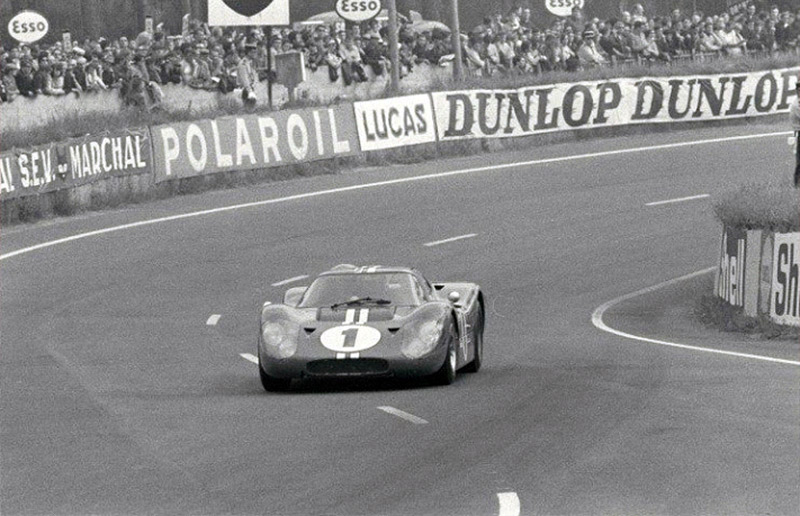 Of course, the “original” Ford GT40 gained fame in the late 1960s when Henry Ford took a bottomless budget and a will to win to the 24 Hours of LeMans to fight Ferrari. It not only won, it won four consecutive times and won as an extremely rare American manufacturer. The victories helped put Ford on the world stage and, together with the Shelby Cobra and other muscle-cars from the 1960s, created a heritage that has sustained Ford for decades. 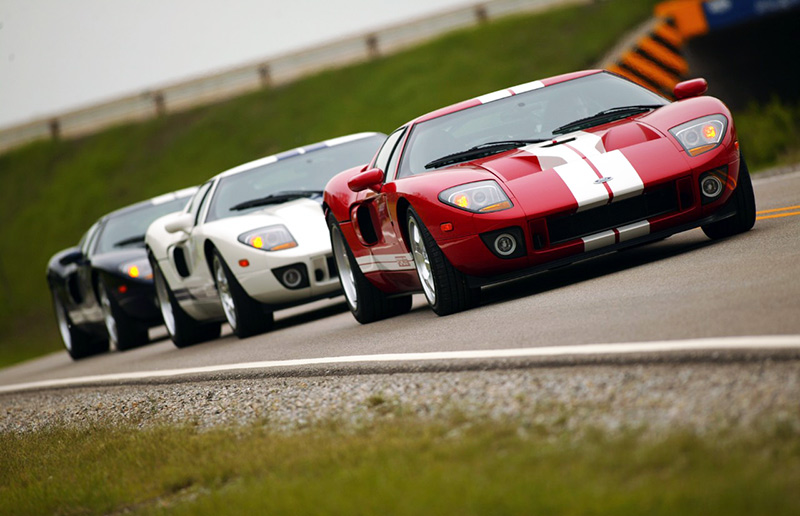 Ford resurrected the GT concept in 2002 when it showed a concept car intended to celebrate the marque’s 100th birthday that would take place a year later. The concept was such a hit that Ford ended up making and selling over 4000 units for the 2005 and 2006 model years. The V-8 engine produced over 550 horsepower and propelled the GT to a top speed in excess of 200 mph. Several chassis found their way to racetracks via privateers but the factory did not put its muscle into works entries. 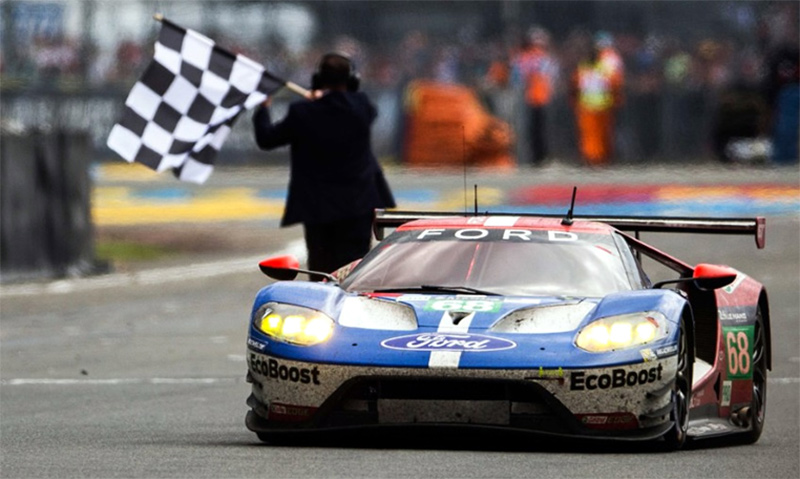 Not wanting to miss out on another opportunity to celebrate a timeline landmark, Ford brought out the current version in 2015 in recognition of the 50th anniversary of the 1966 24 Hours of LeMans. This time, the road car was intended to exist alongside the race car and the race car was targeted to win at LeMans. Chip Ganassi was given the task, the cars were draped in red, white and blue, and world class drivers were selected. Naturally, the team won the GTE Pro class at the 2016 24 Hours of LeMans to provide the storybook ending. Thankfully, the Ford program has thought more broadly than just LeMans, so the racing program has spanned multiple continents and series and given Ford a chance to reach a whole new generation of racing fans. 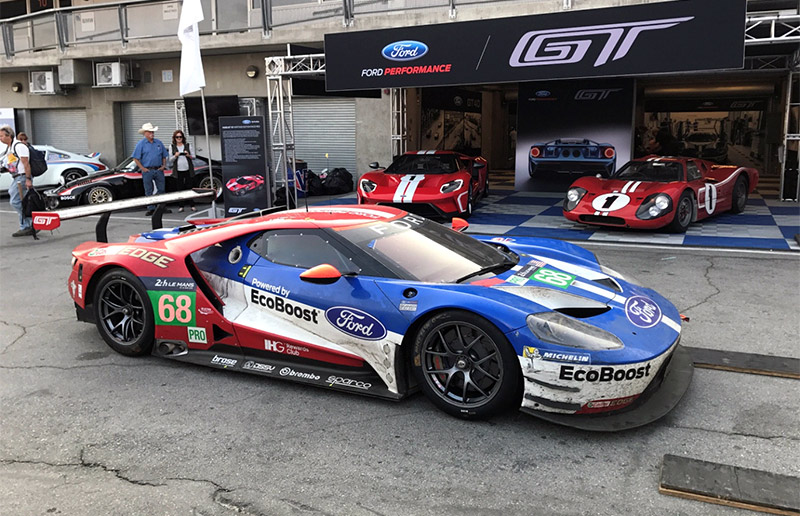 As the recent Rolex Reunion held at Mazda Raceway Laguna Seca, Ford brought out several of its GT family members. The red 1967 overall 24 Hours of Le Mans winner of Dan Gurney and AJ Foyt was in attendance. A 2018 Ford GT road car sat alongside draped in an identical color scheme of red with white stripes and trim and a number one on the front hood called the ’67 Heritage Edition. Not to be left out, the GTE-Pro winner of the 2016 24 Hours of Le Mans driven by Joey Hand, Dirk Müller and Sebastian Bourdais was on display as well – still dirty with racing grime as it crossed the line. 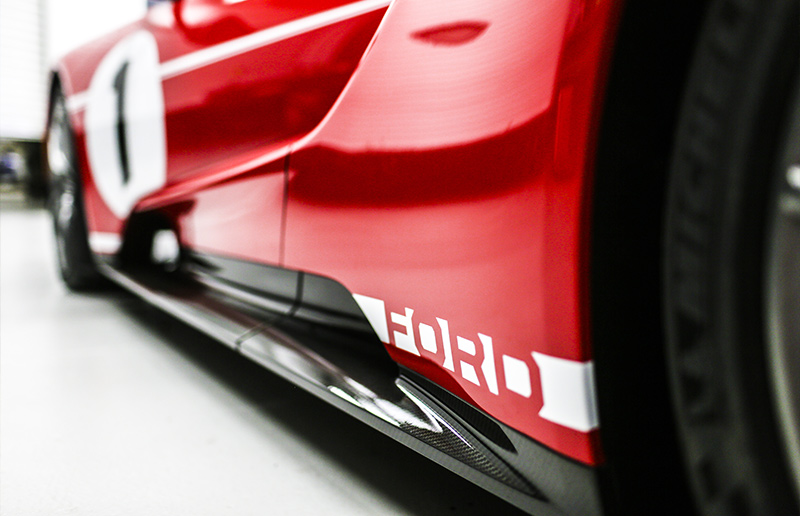 The current Ford GT version is purposeful. The doors pivot to the sky, the front hood sports giant nostrils, and the aerodynamic treatment around the rear towards the twin exhaust ports is dramatic. It is wide and low and angular and makes the most of its mid-engine configuration. Carbon fiber is the manufacturing material of choice, saving weight but also taking more time to build. 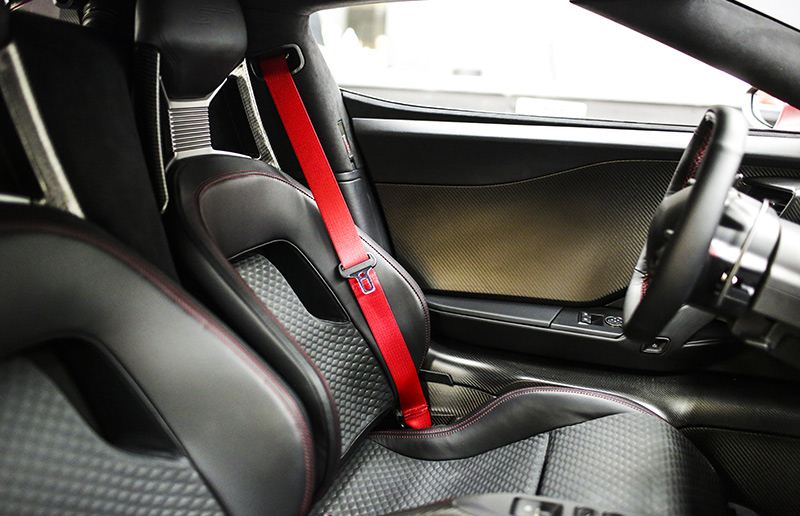 The result is a car that will likely be looked upon as another key building block in the Ford heritage and make a lot of new owners very happy in the process! 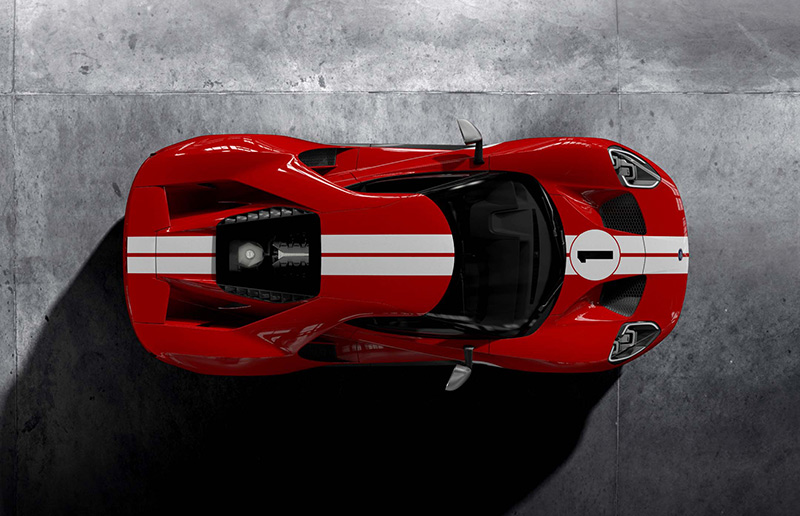 Manny Takes His Ford GT Heritage Through the Canyons