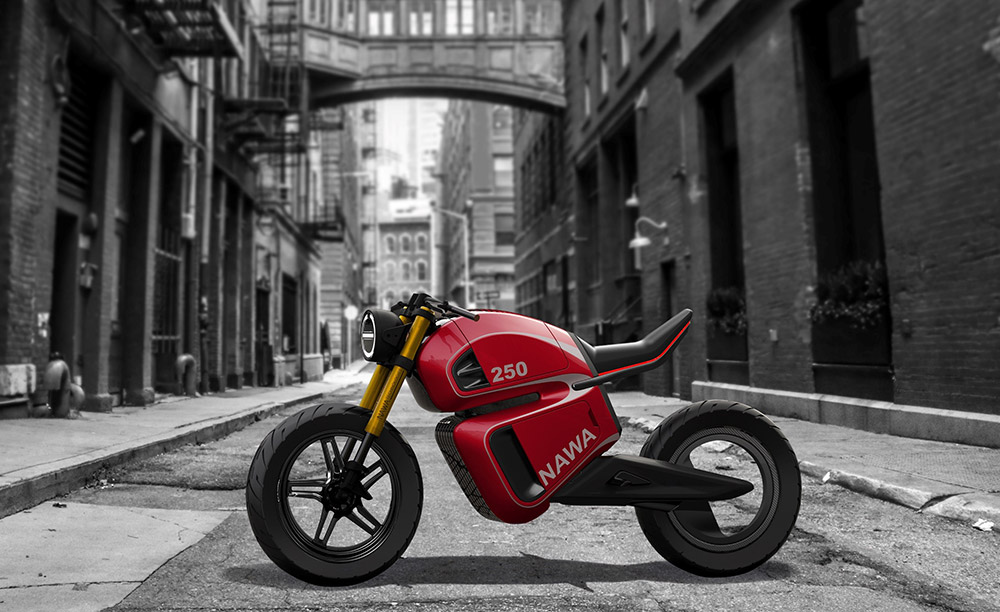 First unveiled in concept form at CES 2020, NAWA has joined forces with expert technical partners to rapidly accelerate development of the revolutionary new machine; a zero-emission motorbike that illustrates how NAWA’s nano-based ultracapacitors, called NAWACap, can be applied to a real-world electric vehicle (EV) powertrain, by combining them with conventional lithium-ion cells to create a ‘hybrid’ battery system.

Optimising both energy sources, the innovation opens up new possibilities for all e-powertrains, greatly improving efficiency, reducing charging times and extending entire system life. Entirely modular and scale-able, the system is applicable to any electric vehicle and can reduce the size of the lithium-ion battery by up to half, or extend the range by up to double – or a combination in between.

“NAWA Racer is our vision for the electric motorbike of tomorrow – a retro café racer-inspired machine, but one that is thoroughly modern. It is lightweight, fast and fun, perfect for an emission-free city commute that will put a smile on your face. But it also lays down a blueprint for the future.

“NAWA’s next-gen ultracapacitors unleash the potential of the hybrid battery system with five times more power and energy than existing ultracapacitors. What is more, this design of powertrain is fully scale-able: there is no reason why this cannot be applied to a larger motorbike, or car or other electric vehicle. We believe it shows off the e-powertrain of the very near future. Since NAWA Racer’s initial unveil at CES in 2020, development has continued at pace. Thanks to our technical partners, we can now reveal our first dynamic prototype.” – Pascal Boulanger, Founder of NAWA, and CTO

Located in NAWA Racer’s top tank area is an arrangement of NAWACap ultracapacitors, which offer 0.1 kWh and boost a lithium-ion battery mounted low in the chassis, where the internal combustion engine would otherwise be. Re-using more than 80 percent of the energy captured from regenerative braking, NAWA Racer uses a much smaller lithium-ion battery than would otherwise be possible: just 9 kWh, around half the size of a conventional electric sports bike’s battery. What’s more the two batteries combine to form a structural part of the bike’s carbon fibre frame, and with composite body panels and the NAWACap pack itself being extremely lightweight, NAWA Racer tips the scales at just 150kg, a weight saving of 25 percent over conventional electric sports bikes.

Thanks to its lithium-ion battery, NAWA Racer can cover 150km on a mixed cycle. But by capturing so much energy from stop-start riding, releasing it again as acceleration, NAWA Racer can double its urban range to 300km. The NAWACap pack recharges in just two minutes and the entire battery can be charged to 80 percent in one hour from a home supply. As standard, the in-wheel motor produces 100PS, rocketing NAWA Racer from rest to 100km/h in less than three seconds, onto a top speed of 150km/h. And no matter the charge level of the lithium-ion battery, this acceleration will always be available because of the ultracapacitor’s high power characteristics, which continually maintain response and performance.

With three driving modes (Eco, Urban, Sport) and a fully programmable bespoke driving mode, not to mention the option to easily upgrade the NAWACap batteries, along with an app that connects the rider to the bike 24hrs a day, there are many ways to configure NAWA Racer.

Intended to turn heads as well as offer a ground-breaking electric powertrain, NAWA Racer brings a modern twist to its retro looks with simple, smooth lightweight composite panels and rear arm, painted aluminium, copper and black, based on a strong, stiff but light carbonfibre frame. Details such as LED lighting for the headlight and taillight, anodised matte black suspension forks, nubuck leather saddle in vintage complete the striking look. NAWA Racer will also focus on customisation with multiple ways to tailor and futureproof its striking design.

While NAWA has no plans to make or sell a production version of the NAWARacer, it is open to approaches from appropriate partners interested in taking this revolutionary e-motorbike to the streets.